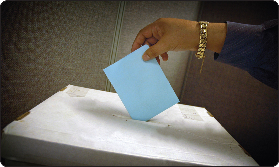 The primaries are, contrary to what a lot of people believe, one of the most amazing filters in the democratic system. Its real purpose is to reduce to two the number of candidates in the ballot for any given election and thus simplifying the equation and making it easier for the voter to make a good decision. It’s not, as many people may argue, a minor election in which we already know who are going to be included in the ballots.

Why are the Primaries important?
The vote is one of the most discussed topics all over the world. The vote is a weapon. The vote is a means of communication. The vote is a way to express our point of view, our disagreement with the way our elected officials are handling our business or an award for those who are doing well. The vote is, in other words, the most powerful weapon the people have to express its voice. The vote is a right, too, and choosing not to use that right is like letting somebody else making a big decision in our lives.

The primaries, on September 12, are a very unique opportunity for the Hispanic community to exercise the right to vote and express its support for those candidates who found a way to navigate through the anti-immigrant waters and support it. It’s a unique chance to punish those who proposed anti-immigrant legislation and used undocumented immigrants as sacrificial lambs in order to obtain votes.

Some of the Hispanic leaders all over the nation have been talking about the power of the “Latino Vote”, the power of a figure very close to 18 million voters that can support or oust elected officials from office. Others have spoken about the power of the pro- immigrant marches, they say that the marches (in late March and April) were just a sample of that power and support their theory on research that says nearly 76 percent of the people who marched were citizens or legal residents in the country.

Seen from that perspective, the power of the “Latino vote” should be more than enough to strike fear in the hearts of politicians, but that’s not the case. Those politicians know how to play their cards, they are real gamblers and know that Latinos, as most of the minorities in the country, don’t vote. They are pretty aware that Latinos don’t vote because they don’t understand the system, because they feel intimidated and alienated and don’t know how to do it. Even worse, they are very aware that the political experience of some of them has turned them into very cynical people when it comes to elections and thus, they don’t fear the power of the “Latino vote” because they don’t believe in it.

But, anti-immigrant legislation created only for political gain may have had a different effect and should be more than enough to move people to vote, and to answer the question that some of them are surely going to ask: Why should I vote inn the primary if I can wait for November when my vote is really going to be needed?

Because the primaries are the first chance to show your approval or disapproval with the way things are going on. Because the primary is the best way to punish the candidates that pushed for anti-immigrant legislation and make sure they don’t appear in the ballots in November. And because if we don’t vote on the primary somebody else is going to vote and, according to information shared by America Votes (a 527 PAC organizing people to vote), the polls show that 12 percent more white people (than the 2004 election) are getting ready to vote and they are voting following the anti-immigrant speech form House Republicans.

Who is eligible to vote?
All citizens, born or naturalized, 18 years old or older, who have lived in the state for a minimum of 20 days have the full right to vote. Minnesota is a very interesting case because it is one of the few states nationwide that requires a proof of citizenship to vote. This is a new policy approved last spring during the Legislative session thanks to the anti-immigrant spirit, inspired by the governor, in the House. The Legislative piece is the work of Tom Emmer, a novice representative from Delano, who chose to join forces with the governor and follow the Republican strategy to bash undocumented immigrants to obtain political gain among his constituents.

The vote requires a previous register, something very much alike what most of Latin American countries have, and Minnesota is one of the few states that allows same-day registration. It is a very simple process and all a person needs to do is to show up at his voting site with his valid ID (a photographic ID is required), a proof of citizenship (birth certificate, citizenship card, U.S. passport) and a proof of residency in the state (a bill to the person’s address is a valid proof) that shows that the person is eligible to vote in the precinct. If the person doesn’t have a proof of address, he can ask a neighbor to serve as a witness to certify his address. That neighbor has to fill the same requirements than the person he is certifying for.

Minneapolis and all the major cities in the state have already launched a “Web site with the information”:http://www.ci.minneapolis.mn.us/elections/index.asp, and on this site, people can access information about voting centers, a guide on how to vote, information about the candidates and registration. Unfortunately, the Web site was built completely in English and doesn’t have a Spanish version but, it does have copies of the registration form in Spanish and other languages.

Some Latinocandidates to follow in the primary
Of course, Emmers’ seat at the House is going to be in the elections and this is a great chance to show him our disapproval of his tenure. Besides him, State representatives like Jim Knoblach (creator of the legislation meant to override the cities power to decide if their police departments should be enforcing immigration laws and stop being what he called “Sanctuaries”, such as Minneapolis and St. Paul); Steve Smith, the state representative who introduced the “Immigration Omnibus” created by the governor’s office and introduced legislation that, if approved, would have banned any immigrant from obtaining a driver’s license in the state; and Tony Cornish, one of the most vocal and strong allies of the governor during the last session.

They all have an election to face and the primary is a great opportunity to show them our disapproval. This list would never be complete if we forget Republican Governor Tim Pawlenty, who faces a primary challenge from Sue Jeffers. Mike Hatch faces Becky Lourey in the Democratic primary and Peter Hutchinson faces Pam Ellison in the Independence Party primary.

On the other hand, state representatives like Carlos Mariani, Jim Davnie and Neva Walker earned our respect and solidarity thanks to their strong positions in favor to immigrants and education. They all deserve our vote and the primary is a good moment to show them our support. And, for the first time ever in the state, our community has three strong candidates running for public office: Patricia Torres Ray, Willie Domínguez and Juan López: and of course one of our most reliable allies and friends, Keith Ellison, is running in the DFL primary to succeed U.S. Rep. Martin Sabo in the Fifth District.

The power of the primary is such that if a candidate finds a way to gain a massive Latino turnout on his or her behalf, any candidate, including Governor Pawlenty, will be in trouble and could even be ousted from the race and thus his name will no longer appear in the November ballots. That’s the real power behind the primary, a much underestimated power. Underestimated even by the greatest strategist in the state.

Patricia Torres Ray
Born in Colombia, Patricia arrived to Minnesota with her husband 20 years ago. She made history last April when she became the first Latino woman ever to win the DFL endorsement for a public office. Her vast experience in Health, Education and community affairs and her strong liaisons all over the state make them the perfect candidate. She is running for the 62nd Senatorial District for the State Legislation.

Agustine “Willie” Dominguez
A Latino born and raised in North Minneapolis. Willie has dedicated most of his life and career to education and community service. Willie became, last June, the DFL endorsee for the 58B Legislative District, the district that Keith Ellison left behind in his bid for 5th Congressional District.

Juan Lopez
A Puerto Rican raised in New Jersey that has never forgotten his Hispanic roots. He came to Minnesota back in the ’70s after his service in the Vietnam War. He has dedicated his life to community service and gained a vast experience in law affairs while working with juvenile detention in Hennepin County. Juan made history four years ago when he became the first Latino endorsee to seek the Hennepin County Sheriff’s office. His experience in the county make him one of the strongest candidates for the office and one of the best Latino candidates ever.