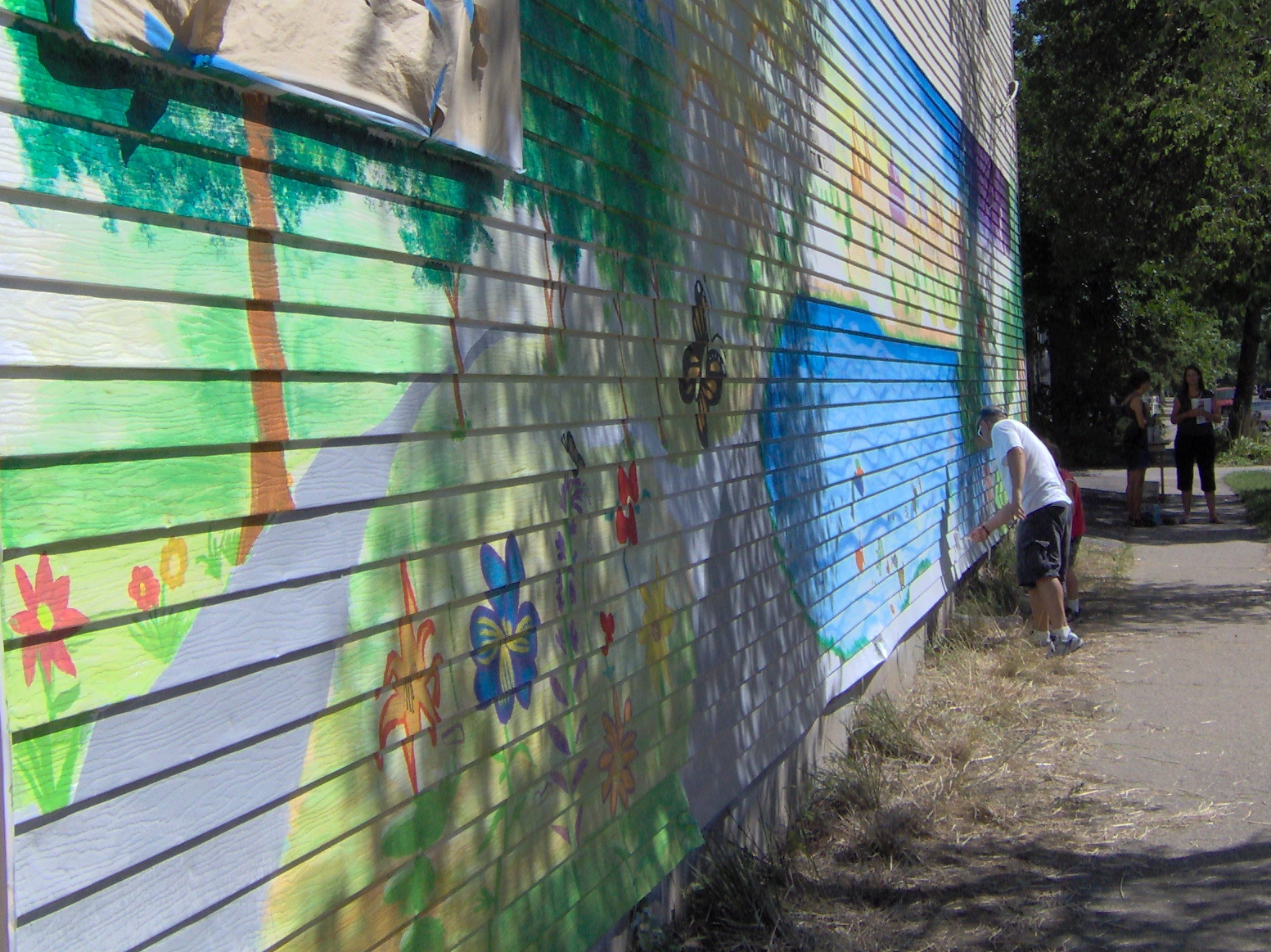 Local artist Victor Yépez and community volunteers are painting a mural on the Atlantic Press building in the Powderhorn Park neighborhood of Minneapolis. Work on the mural began on August 16, and it will depict Powderhorn Park during its annual Fourth of July firework show.

The co-owners of Atlantic Press, brothers Phil and Pete Anderson, wanted to have a mural painted on their building to prevent graffiti. With the help of the Powderhorn Park Neighborhood Association (PPNA), they received a grant from the City of Minneapolis to have the mural painted. The PPNA hired Yépez to paint the mural with help from volunteers. Becky Timm, PPNA’s executive director, said they chose Yépez because he could best represent Powderhorn.

Yépez said the owners wanted a mural that was realistic and showed something for which the neighborhood is famous. So they all decided on the Fourth of July fireworks show. Powderhorn lake is in the center at the bottom and fireworks will be exploding along the top. Across the middle, there are buildings representing different parts of the world such as the Eiffel Tower, the Statue of Liberty, and Mayan pyramids, with paths leading from the landmarks to Powderhorn Park. Yépez said they represent the people in the neighborhood and how they came from all over the world to live there. He said that these paths are not real of course, but he said he wanted to have a little bit of magic in the mural. The mural will cover the whole south wall of the building, which is 60 feet wide by 25 feet tall.

PPNA volunteer Kathleen Sullivan co-coordinates the mural project. She said many youths from the neighborhood contribute to the mural, and Valspar donated the paint for it. Sullivan said that one such youth is Lizeth, who sketched the flowers on the left side of the mural which younger girls then painted in. Another is Tre, who mixed painted and painted in the sidewalk. Yépez’s seven-year-old son Max also helps paint, and he said, “The best thing I like is Lady Liberty. It looks most realistic.”

Yépez is from Quito, Ecuador, and moved to Minneapolis in 1997. He said he has worked in schools, as an artist in residency, and on community projects. He does whatever people need, he said. “If they need a float, I make them a float. If they need a band, I got a band,” said Yépez, “I just want to make people happy.”﻿