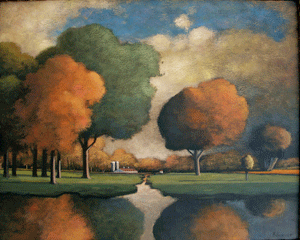 Summer is art fair season in Minnesota and the Powderhorn Art Fair, now in its 21st year, should be on the top of your “to do” list. The Fair will run Aug. 4-5, with booths spread throughout the 66-acre Powderhorn Park, in the heart of the city. Thanks to the work of dedicated staff and volunteers, the Fair will bring the arts and crafts of 184 contributors—local and national—to South Minneapolis.

Neighborhood fairs are a great opportunity to support local artists and bring home a piece of original art—a one-of-a-kind treasure that will never be mass produced! Judging from the list of this year’s entrants, there will be plenty of jewelry, pottery, fiber and glass works, but don’t overlook the award-winning artists who will be showing affordable watercolor, acrylic, oil and pastel paintings.

Stop by booth 66 and chat with Charlotte Fung Miller, whose exquisite Chinese brush paintings will amaze you. Charlotte paints with watercolors on rice paper, combining traditional designs with Midwestern themes and hues. Her soft, luminous colors give her subjects—flowers, birds, landscapes and animals—a dreamlike quality, and her paintings are tranquil and soothing, reflecting the Taoist belief in reverence for nature.

Charlotte studied Chinese calligraphy and brush painting under Master Lui-Sang Wong, and has been a full-time artist for more than 40 years. She calls herself the “working man’s artist” because her paintings are affordable and appealing to all. Her awards include first place, distinction and excellence at fairs in Michigan, Wisconsin, Illinois and Minnesota, and she was a Featured Gallery Artist on Milwaukee Public TV. This is the Chinese year of the dragon, so look for Charlotte’s new works using this motif!

Don’t leave the Fair before heading over to booth 140 to see acrylic painter Kevin Kluever, whose awards include honorable mention at the 2010 Powderhorn Art Fair, and the prestigious “Award of Excellence,” given to him twice by the Hopkins Center for the Arts. Kevin paints a range of subjects, but is probably best known for his landscapes, which are filled with nuanced tones, solid shapes and mysterious light. His paintings reflect the influence of many artists, including Edward Hopper, Grant Wood and Vincent van Gogh, but the major influence on his work is the American George Inness, a 19th-century tonalist painter known for his use of neutral grays and browns to evoke a spiritual and emotional vision of nature.

Kevin’s colors often reflect those preferred by Inness and the tonalists. His subdued reds, oranges and blues project a calmness that is reinforced by his keen sense of design, which incorporates both balance and a strong sense of movement. In “Autumn Landscape” (see photo), the stillness evoked by the soft, rounded forms of the trees, a design repeated in the clouds and reflections in the water, is countered by the twists and turns of the stream that flows through the painting. Balance and movement play off one another, and are key to making the painting visually captivating.

A versatile artist, Kevin also brings art to the public through his murals, which can be found throughout the Twin Cities and western suburbs. The Pioneer Museum in Long Lake, the City Hall in Maple Plain, and the Threshold Art and Music Gallery in Mound all display Kevin’s mural paintings. He’s also interested in Minnesota history and will often paint two scenes of a local street, one from an historical photo, depicting how it looked decades ago, and another of the scene today. The side-by-side comparison reveals some fascinating changes over the years! Kevin is a veteran of 10 Powderhorn fairs. He enjoys meeting people and talking about his paintings, and he expects to have about 12 paintings on display at the Fair.

The Powderhorn Art Fair will have something for everyone.

Janet Contursi is a freelance writer. For more local art news, go to her website and blog:
www.artsminnesota.com
www.examiner.com/art-events-in-minneapolis/janet-contursi