Joe Heffron’s livelihood has been earned mainly with contemporary design and illustration, but he’s always been attracted to another type of visual expression, one that preserves memories.

“Commemorative art excites me,” says the Como-based artist, “and I made up my mind long ago that if I ever had an opportunity to get close to it, I’d jump at it.”

Jump he did, and Heffron was selected from a field of nearly 50 applicants to create the Minnesota State Fair’s 2012 Commemorative Art. His colored-pencil poster with a giant rooster as its centerpiece celebrates the food, fun and excitement of the Great Minnesota Get-Together.

There’s a sort of unabashed exuberance about the piece, and Heffron says the inspiration for it came from a visit he and his wife, Marla, made to the Poultry Barn during last year’s fair. 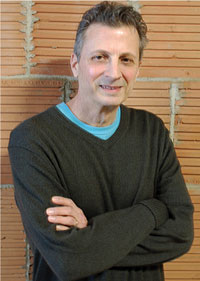 “It was late morning and I have no clue as to what set them off, but the roosters were making so much noise that it was deafening and we had to leave,” he recalls. “As you can see, it made a big impression on me.”

Heffron is two-for-two when it comes to artistic competitions, having won another one about 20 years ago, when he designed a poster for “Billboards,” a Joffrey Ballet production featuring music by Prince.

This time his piece will be on display in the Fine Arts Center during the entire 12-day run of the fair. It will join the other works that the event’s official artists have created since the program started in 2004, which are on permanent display in the Libby Conference Center.

Heffron’s career has been devoted to graphic design and illustration, as well as the design of residential and commercial stained-glass windows. For example, he designed the orange-and-black logo used by the Geek Squad, contributed to Dayton’s Department Store’s Santa Bear line that was a favorite for so many Christmases and created the 29-foot-tall stained-glass American flag in the Robert J. Dole Institute of Politics at the University of Kansas.

“All the publicity I’ve gotten may help my business, which would be great,” Heffron says. (He’s been asked a lot lately if he’s related to Mike Heffron, former fair general manager. The answer is no.) “But whether it does or not, my satisfaction comes from in joining a pretty exclusive fraternity—all the previous winners.”

Posters and a limited number of signed prints featuring Heffron’s art are available for purchase at msffoundation.org, the website of the Minnesota State Fair Foundation. Its mission is to preserve and improve State Fair buildings, grounds and educational experiences. Posters may also be purchased at the State Fair Box Office on the fairgrounds.

To learn more about artist Heffron’s work, go to www.heffronart.com.

Roger Bergerson is a regular contributor to the Park Bugle.