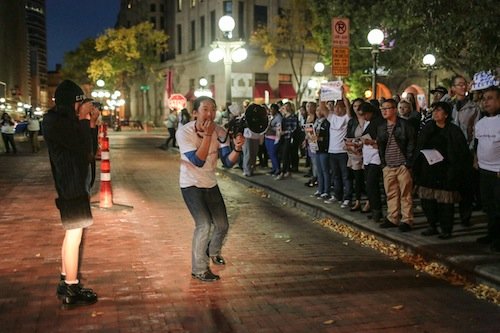 I’ve gotten some emails and some of my friends have approached me on what I’ve written about Miss Saigon at the Ordway, so I thought I might post my responses here. I should note, that, though I wrote a column asking arts writers not to review the show (which was for the most part much ignored, although all of the reviews that I’ve seen so far have been negative), and also collaborated on two pieces for The Uptake before and after the protest, I’m not affiliated with the group that organized the protest in any way. So here are a couple of my thoughts in response to questions I’ve received:

Well, censorship is a big word and not one to be taken lightly. Clearly, it’s still an issue when young adult writer Rainbow Rowell’s speaking engagement was cancelled in Anoka County because of parents’ objections to her LGBT-themed coming of age novel, which takes on bullying. Censorship is an issue when Neil Gaiman’s fantasy novel Neverwhere has been taken off the required list at a school in New Mexico as a result of a parent’s complaint, amongst many other examples.

In both of those examples, while the censorship in question may have been spurred on by angry parents, the decision to remove the books was made by a government entity- a county/school district or school officials.

Now, if Ramsey County or the City of St. Paul decided to pass a law that banned Miss Saigon from ever being performed, I could see how that might be considered censorship. However, if the Ordway relented on one of the demands of the protest group and promised to never bring the play back, I don’t think that really would count as censorship. A performing arts venue can only do so many performances a year, after all. That would be like saying they are censoring every musical they don’t produce (which perhaps a disgruntled playwright or two might secretly believe).

Any discussion about censorship has to consider power in its definition. A group of Asian Americans and their allies starting a social networking campaign and holding a protest across the street from the Ordway Center can hardly be considered to be censoring anything, since they are not in a position to make decisions about the Ordway’s season. That power lies in the leaders of the Ordway Center itself, who have clearly decided to ignore and rebuff the group’s demands.

I’ve spoken to a couple people within the group who have talked about putting pressure on funders of the Ordway — both private foundations and the Minnesota State Arts Board — over Ordway’s decision to bring Miss Saigon. I absolutely think it’s their right to do so, though I will admit to getting slightly nervous any time there’s discussion about monitoring the Minnesota State Arts Board just because I get worried about the Republican’s using such discussions make arguments against public arts dollars.

Still, the Ordway did receive $483,500 from the State Arts Board in the 2012 fiscal year, according to their 990 report. I think that just as the Guthrie, the Walker Art Center, The MIA and all the big cultural institutions that receive a lot of public money need to be cognizant of the communities they serve, so the Ordway needs to recognize that as an institution supported by ALL Minnesota citizens, they can’t simply pretend not to hear the objections of an entire group.

I can understand your argument for not going to see Miss Saigon. But would you also say “just don’t go” if the Ordway were to perform Puccini’s Madame Butterfly? Is there a difference between the musical and the opera?

Miss Saigon was particularly singled out by the Asian community as being offensive- not just this time around but twice before. The Ordway knew that the community found it offensive and had protested it before and chose to bring it back without consulting its own cultural advisory panel.

Also, let’s be honest: the “it’s great art” argument holds more sway in a piece of work that is actually that. I cannot deny that Puccini was a brilliant musician and that the music he created, especially for Madame Butterfly, are beautiful pieces of music in the canon, even if the premise is a racist one, illustrated most clearly by David Henry Hwang’s play M. Butterfly, presented recently at the Guthrie Theater. The same “great art” argument cannot be said for Miss Saigon. It has been panned by critics since it opened, and yet for some reason still holds box office sway.

I think that all theaters and producing venues do indeed need to take a hard look at the work they produce and whether it fits their mission and the community they serve. I would ask theaters — the Ordway, the Hennepin Theater Trust, the Guthrie, etc. to take a look and find other works of art- from a more diverse and contemporary pool or artists that they could present instead. They just might find that in doing so, they would be able to draw people in who previously wouldn’t have considered going to the thea particularly younger audiences and audiences from diverse communities.