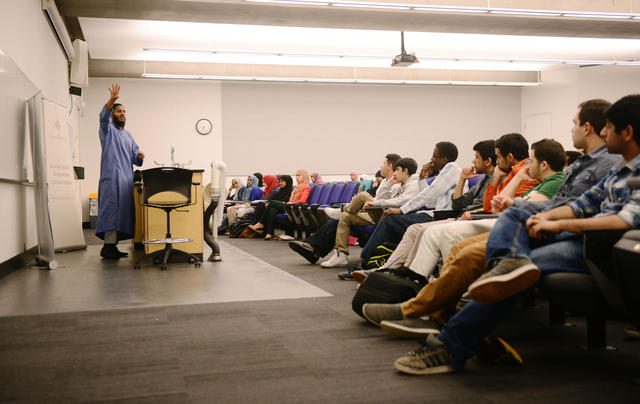 Darul Hikmah instructor Mufti Hussain Kamani speaks to Muslim students about the Sunnah, the lifestyle of the Prophet Muhammad, on Friday, April 26, 2013, at the Science Teaching and Student Services building. (Photo by Jaak Jensen)

Before the identities of the Boston bombers were released, Nora Ali was thinking one thing: “I hope they’re not Muslim.”

More than two weeks after two men with alleged ties to radical Islam bombed the Boston Marathon, killing three and injuring more than 260 people, Ali and other Muslims nationwide have found themselves in a post-9/11-type situation — defending their religion again.

“Everyone in the [Muslim] community shudders because we worry, ‘Is this going to be another attack on our community?’” said Ali, a biochemistry senior at the University of Minnesota.

The FBI reported a 1,600 percent increase in anti-Muslim hate crimes in 2001, to about 500 incidents. Since then, reports of violence against Muslims have gone down, but levels remain higher than before 9/11.

Muslim Students Association member Amer Sassila said discrimination against Muslims isn’t as bad as it was right after 9/11, but he’s still frustrated with public perception of Muslims after the Boston bombings.

“I wasn’t the one who did this,” Sassila said. “You’ve got two goons doing it out of the 1.5 billion [Muslims] in the world.”

Sassila said he teaches fellow University students about Islam, which helps break down stereotypes. Despite these misconceptions, Sassila said Islam calls its followers to “do good.”

“We’re not here to cause any trouble,” he said. “We’re here to make peace.”

Sassila said after 9/11, it wasn’t easy to be associated with Islam.

“I was afraid to show it because I felt like the whole world was against me,” he said.

More than half of polled Muslim-Americans said it’s become more difficult to be a Muslim in the U.S. since 9/11 in a 2011 Pew Research survey.

Although Ali said she has never felt personally discriminated against, she often sees anti-Muslim posts on the Internet.

“It can really bring you down when you know there are people like that out there,” Ali said.

Ali said the University community is generally “Minnesota nice” to her and other Muslim students, but she always wonders if her classmates are the ones posting anti-Muslim comments online.

These negative comments can be frustrating to read because Muslims don’t teach terrorism, Ali said.

“For someone to think that they can bomb an entire community and think they’re doing it in the name of religion is a slap in our faces,” Ali said, adding that people like the Boston bombers skew perception of her religion.

Imam Youssef Soussi said after learning of the Boston bombings that Muslims grieved like all other Americans.

“Our sentiments are the same as [after] 9/11 — we reject it completely,” Soussi said of the bombings.

While the Muslim community continues to face discrimination, Ali said she tries to think positively.

“I, still in my heart, even with all the things we see online, I try to think that everyone out there is good and on our side.”