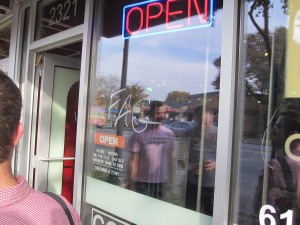 Skip Vandelinde discovered the graffiti when he arrived for work Sunday morning. In the night, someone with a paint marker had scrawled “Fag” in neat letters on the window of the Cockpit Project, a popular Uptown Minneapolis store selling leather and other fetish equipment.

But instead of being cowed, Vandelinde, Cockpit owner Scott Larson, and the shop’s patrons have decided to let it roll off with a little anger, and a lot of humor. All Sunday afternoon, Vandelinde – a clerk at the store – and Larson urged patrons to get their photo taken with the slur in the background in return for a 15 percent discount on any purchase made that day. Larson also suggested that a picture of the slur might be made into a t-shirt.

“I’m not the type to let things happen and pass me by,” Vandelinde told TheColu.mn.

“Especially not now, with all the bullying that’s been going on lately,” he added, referring to the many recent press accounts of “bullycide” deaths of many LGBT students, including Justin Aaberg, a student in the Anoka-Hennepin school district.

Vandelinde said this was the first time the store had been bashed in its ten years of existance, and Larson told TheColu.mn that relations with the store’s neighboring businesses have been positive in the past. However, both he and Vandelinde were quick to point fingers at at least one of the many people attending a hip-hop or rap audition at the neighboring Studiyo 23 shoe store on Saturday night. Vandelinde said the clerk who closed the shop on Saturday night reported “around 100″ people were milling around on the sidewalk outside the two stores.

“You couldn’t stereotype the crowd,” he said. “It was black and white.”

“I’m not saying Studiyo did it – the couldn’t have done it,” Vanderlinde said, “but someone they brought here did. This is the first thing that’s happened since the store opened in 2000. I hate to use the word ‘coincidence,’ but it’s there.”

Larson said that in the last year, there had been an increase in confused pedestrians walking in, and realizing that the Cockpit Project sold fetish gear, walking out quickly while calling the business a “fag store.”

The owners of Studiyo 23 could not immediately be reached for comment.