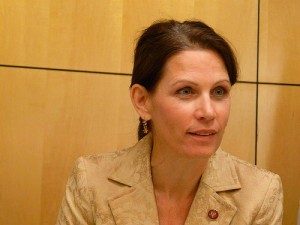 A new survey of Minnesotans shows that a majority of residents – 56 percent – are embarrassed by Rep. Michele Bachmann. The release of the survey, commissioned by the Progressive Change Campaign Committee, Democracy for America and Credo Action, follows recent high-profile statements by Bachmann that she believes President Barack Obama wants to “annihilate” conservatives, that the U.S. faces a “curse” – and extinction – if it fails to support Israel, and that government must “wean” Americans off of social safety net programs like Medicare and Social Security.

The Bachmann survey results, released exclusively to the Minnesota Independent, measure responses to the question, “Do you think Congresswoman Michele Bachmann does Minnesota proud in Congress or embarrasses Minnesota?” While 56 percent of respondents statewide said they were embarrassed by Bachmann, 29 percent answered that they were “proud” of the Sixth Congressional District Republican, and 15 percent were “not sure.”

The survey of 600 Minnesotans gauged feedback based on gender (by four percentage points, more women favored Bachmann than men), race (55 percent of whites are embarrassed by the congresswoman, while 80 percent of people of other races held that sentiment) and congressional district.

Some surprises: While the Minneapolis-area district represented by Democratic Rep. Keith Ellison led the state in finding Bachmann an embarrassment, the relatively conservative District 8, the northern Minnesota area represented by Rep. James Oberstar, came in second, with 69 percent of respondents responding negatively to Bachmann. In Bachmann’s own district, only 39 percent found her embarrassing. However, a majority of surveyed independents – a population likely to tilt the scales in Bachmann’s November election against either DFL Sen. Tarryl Clark or Dr. Maureen Reed – responded negatively to Bachmann, with 62 percent answering that she was embarrassing.

The full survey, which will feature public opinions on Sens. Al Franken and Amy Klobuchar, health care reform and the public option, will be released next week.

Bachmann’s recent proclamations – which have generated sharp reactions from candidates hoping to unseat her, as well as a rebuttal by Bachmann, who decried what she characterizes as “political grandstanding” – haven’t affected the outcome of this survey: It was conducted by phone by Research 2000 on Jan. 31 and Feb. 1.