Amid police restrictions and the state’s first snowfall, Occupy Minnesota protesters holed up in a foreclosed south Minneapolis house for less than 24 hours this weekend before police removed them Sunday afternoon.

Roughly 60 protesters moved from the Hennepin County Government Center plaza in downtown Minneapolis on Saturday to a house once owned by University of Minnesota anthropology adjunct professor Sara Kaiser. The group of occupiers said they were defending the house from the banks and fighting against what they called unfair foreclosures.

It’s unclear when Kaiser’s home was foreclosed upon and if the protesters have the legal right to stay inside the empty house. According to Hennepin County property data, U.S. Bank currently owns the house, but Minneapolis property data still lists Kaiser as the owner.

“It appears U.S. Bank does legally own the house, but we believe ethically and morally it belongs to Sara,” said Nick Espinosa, an OccupyMN organizer.

Minneapolis police went to the house Saturday and made two arrests — one for obstructing the legal process and another for burglary and trespassing. Police returned Sunday to clear out the house and board up its windows and doors. No further arrests were made, according to Minneapolis police Sgt. John Sullivan.

Protesters were unsure of where they would go next but said they didn’t feel the weekend’s events slowed them down. Other protesters are currently occupying another home in north Minneapolis.

“This doesn’t stop the logic of the movement … It’s just another house or another family. We won’t stop,” said Chris Gray, a protester and organizer.

The weekend’s events come at a time when Occupy Wall Street protests across the country have been raided by police and subject to growing governmental restrictions and arrests.

Zuccotti Park, home to protesters where the demonstrations began more than two months ago in New York City, was evacuated last week. A camp of protesters in Oakland, Calif., was broken up Nov. 14.

In Minneapolis, Hennepin County officials ruled early last week that protesters could no longer spend the night in the plaza. On Thursday, Minneapolis police arrested 11 protesters for blocking traffic on the 10th Avenue Bridge during a small demonstration near the University of Minnesota campus.

Will Mathewson, an OccupyMN protester, said Saturday that demonstrators broke a window in order to enter the house. Mark Edwards, a neighbor, said he heard protesters dumping glass into his trash can. 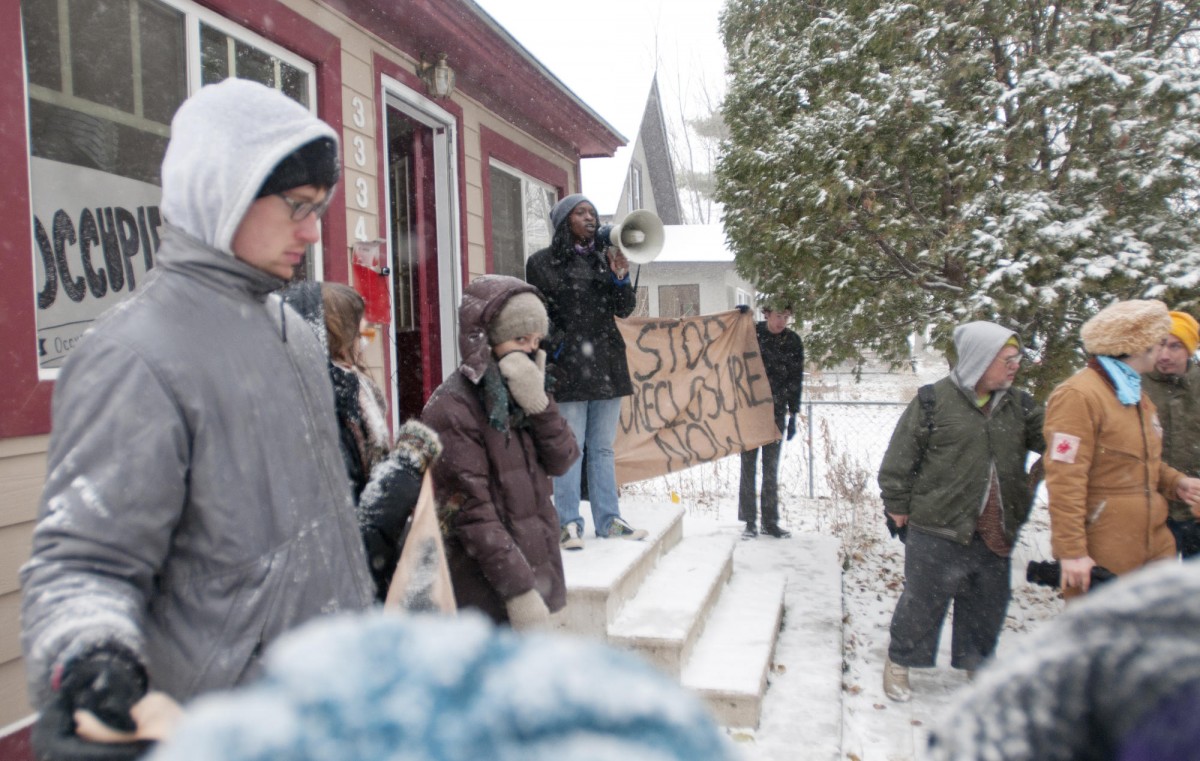 Occupy Minnesota protestors took over a foreclosed house in the Corcoran neighborhood Saturday evening. Protestors left the Hennepin County Government Center Saturday afternoon and remained in the house until police removed them Sunday afternoon and boarded up the windows. (Photo by Satchell Mische-Richter)

By 5 p.m. Saturday, police arrived and ordered the occupants to leave the house. As police searched the house, they arrested one protester who refused to leave the home and one who stood in front of a police car as it attempted to drive down the street.

As of Sunday night, both were still in custody pending charges at the Hennepin County Jail.

Protesters linked arms around the house while chanting, “Banks got bailed out, we got sold out! Stop foreclosures now!” As the police left, protesters re-entered the house and locked the doors. About 30 protesters stayed the night on couches and the floor, according to protester Ben Egerman.

Minneapolis police returned Sunday afternoon, this time with 10 squad cars, a police van, a fire truck and a Metro Transit bus. Police officers and firefighters evacuated the house and boarded up all of the windows.

By 2 p.m., the block was empty. Protesters said they would meet that evening to discuss next steps.

“We could potentially move to another house,” Espinosa said. “It’s just like Oakland: When we are threatened, our reaction is always increase numbers, increase participation.”

Many of the neighbors surrounding the house disagreed with the protesters’ reasoning for defending the former house of Kaiser, whom they said hadn’t lived there for more than a year.

Another neighbor, Jim Helwegen, who lives across the alley, wasn’t pleased with the protest.

“Now I just have to look at this boarded-up house.”

-The Associated Press contributed to this report.