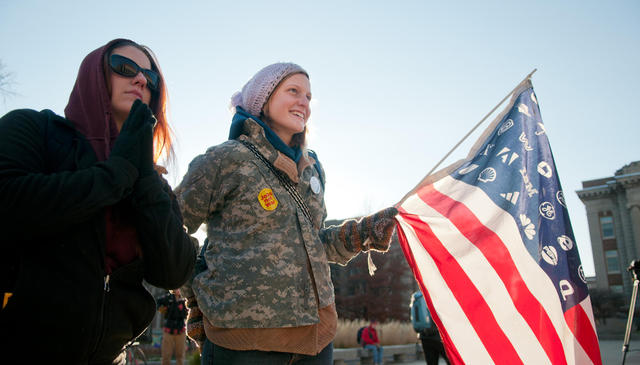 Elise Kulzer, right, and Sarah Chandler, left, protest during Occupy Minnesota on Northrup Plaza on Thursday afternoon. Both Kulzer and Chandler are members of the Democracy Matters student group. (Photos by Satchell Mische-Richter)

After gathering at the University of Minnesota on Thursday to march with Occupy Minnesota, 11 protesters were arrested for blocking traffic on the 10th Avenue Bridge.

Though University students were among the 30 protesters who gathered on campus earlier in the day, it’s unclear if any who were arrested were students. Protesters were warned before their arrest, but refused to leave their post, Minneapolis police Sgt. William Palmer said. They impeded traffic for 20 to 30 minutes, he said.

Earlier in the afternoon, a collection of University students, organizers and citizens held painted signs in Northrop Plaza while chanting for lower tuition, more education spending and against corporate greed. One protester held an altered American flag, which replaced stars with major corporation logos.

Ty Moore, a staff organizer for the Socialist Alternative who helped organize the protest, said the group planned to march to the 10th Avenue Bridge, where another rally was taking place. The group would then travel to the Hennepin County Government Center in downtown Minneapolis. 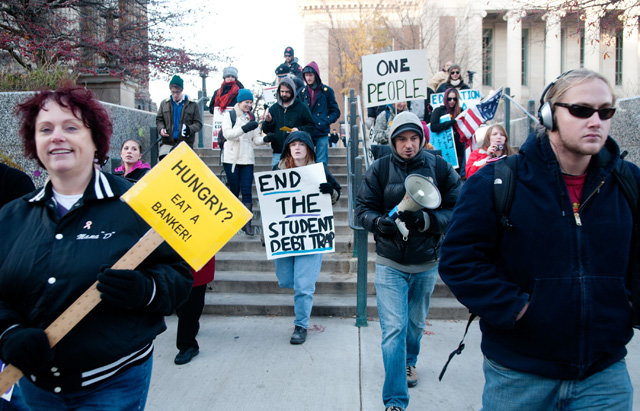 University police, who stood behind the closed doors of Morrill Hall, watched intently but didn’t approach protesters. A squad car followed the march as it moved across Washington Avenue Bridge onto West Bank.

“There hasn’t been any problems so far, but the night is still young,” said University police Deputy Chief Chuck Miner.

He said officers would assist the Minneapolis police in following the protesters. According to footage from a Minnesota Department of Transportation traffic camera, the protesters had blocked traffic on the 10th Avenue Bridge.

Students from the Socialist Alternative and Students for a Democratic Society attended the march, as did members of Minnesotans for a Fair Economy.

Ky Krawczeski, a University freshman, said he had been at some Occupy protests in downtown Minneapolis when the weather was warmer but hadn’t for a few weeks.

“I’m here today because I believe education is a human right,” Krawczeski said. “It’s necessary to get a decent job and survive.”