“Industrial facilities dumped 226 million pounds of toxic chemicals into American waterways in 2010,” according to Environment Minnesota, which marked World Water Day Thursday by releasing a new report, Wasting our Waterways 2012: Toxic Industrial Pollution and the Unfulfilled Promise of the Clean Water Act. Our own Mississippi River came in second to the Ohio River in the race for the dubious distinction of most toxic discharges. The Environment Minnesota press release summarized some of the findings for Minnesota:

Environment Minnesota warns that copper-nickel mining proposed for northern Minnesota poses a potential danger, as “hard-rock mines of this sort are major polluters across the country.”

I grew up on the Crow River, which is designated as the Wild, Scenic and Recreational North Fork Crow River. Some 18 years ago, a big ag operation proposed to build ten giant metal barns and raise half a million turkeys a year just about 900 feet uphill from the Crow River. Some of us were concerned about issues of manure storage and disposal, surface water run-off, groundwater pollution due to a low water table, etc. We fought the proposal. The turkeys won. 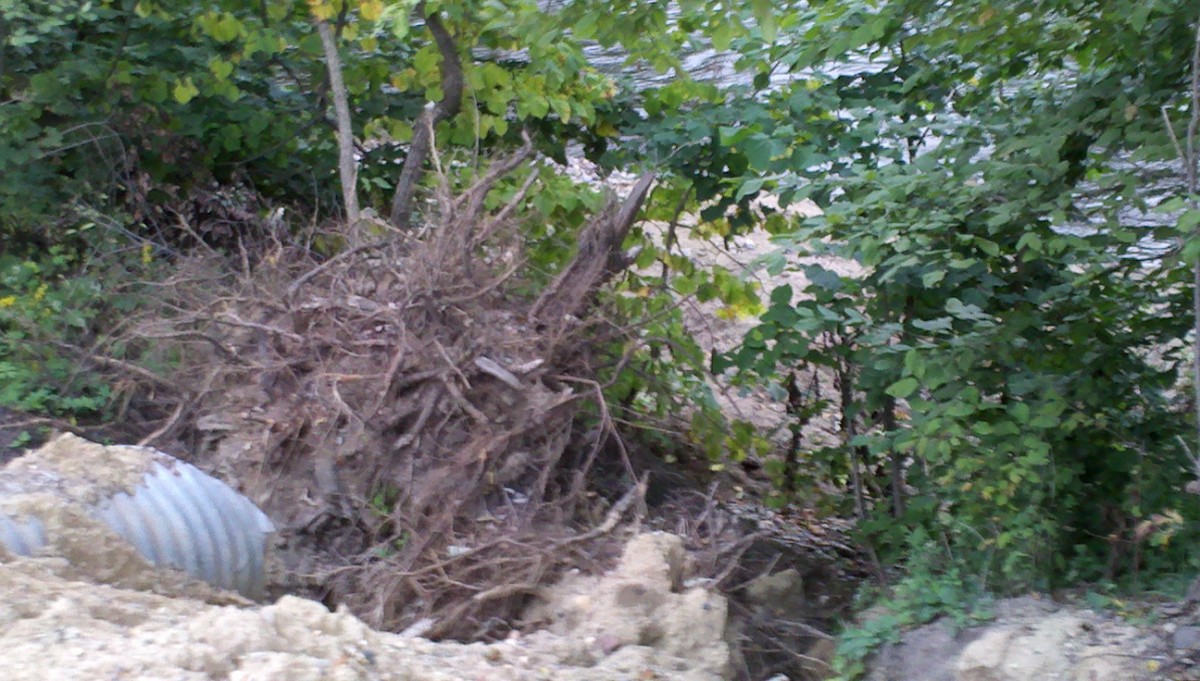 Eighteen years later, I see white turkey feathers frosting the gravel shoulders for miles along MN Highway 24 several months of the year. My best guess is that they drift out of trucks carrying caged turkeys to be butchered. Last summer there was a partial washout on the gravel road between the turkey farms and the river. The photo at left shows the washout and the culvert that runs under the road and empties directly above the river. The photo at the top of the article shows the Crow River.

What’s the quality of the Wild and Scenic Crow River today? I don’t know. I do know that all of our lakes and streams are at risk — from toxic discharges, from mercury contamination of lakes (and fish) caused largely by burning coal, from sedimentation and fertilizer run-off.

Attacks on environmental protection by turkeys running for office pose a greater threat than turkeys with feathers. Congressmember Betty McCollum talked about this threat in a recent speech:

Republican Presidential candidates have debated the appropriate role of the Environmental Protection Agency – and even whether the EPA is necessary. … They have argued that environmental regulations are incompatible with economic growth, and attacked public investments in renewable energy. …

The endangered species all of us should care most about is “the moderate Republican.” Visit their natural habitat in Congress and you’ll have a hard time spotting one! …

Environment Minnesota has some tough recommendations:

Those sound right to me. But there’s more that individuals can do, right now in Minnesota.

And finally, back to McColllum’s speech:

As environmental and energy experts, you need to be talking to your friends and neighbors and arming them with accurate information. The biggest vote this year on the environment will happen in November – not in Congress but in every community in the country.