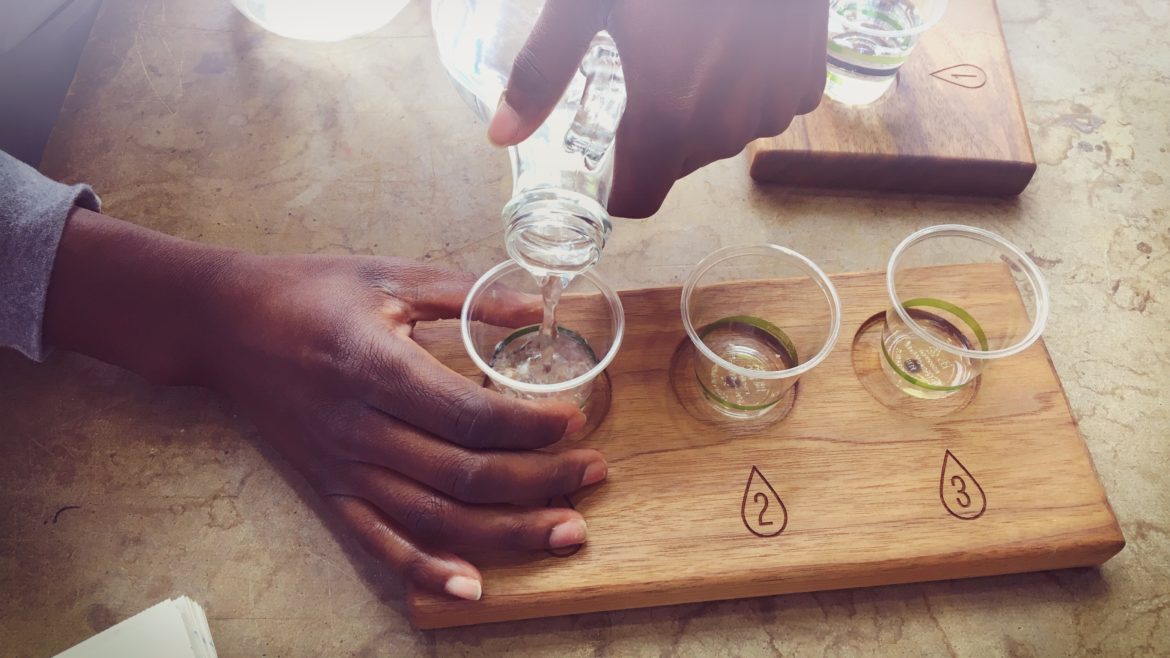 “Welcome to Water Bar, water is all we have.”

These are the words that greeted me as I walked through the door. Immediately, Shanai Matteson, co-owner of Water Bar & Public Studio, offered me a flight of three different types of tap water served in clear glasses. Seated on the stool in the middle of the wooden bar, I stared at and smelled the glasses before carefully taking a sip. With each type of water, intentionally sourced from local businesses and municipal water treatment facilities in the area, I started to wonder what stories of the river, land and people the water carried.

Water Bar is located in a storefront on Central Avenue in Northeast Minneapolis and welcomes all who pass by during open studio hours to drop in, drink and talk. Water Bar began as a pop-up public art project with the intention to create connection around the simple yet vital ritual of drinking water, and now serves as a rare community incubator for conversation around environmental injustice, water access, pollution and community development. Since 2014, organizers of the project, Shanai Matteson and Colin Kloecker of Works Progress Studio, have served water to over 30,000 people throughout the U.S. Not only does this project encourage visitors to slow down and consider how water impacts their lives, it also opens up a rare space to examine the myriad of stories that describe Minnesotans’ complex relationships to water.

“The most that I do when I’m tending the bar is listen,” water-tender and lead scientist at the Institute on the Environment Kate Brauman says, “invariably people who come to Water Bar end up talking about their water sources or what water issues they’re concerned about.”

Listening – a core component of Water Bar’s mission – moves the bar beyond functioning as an art project and connects the scientists and advocates working in environmental sectors to the public. The “water-tenders” who staff the bar are often environmental researchers, public policy makers and community advocates. While willing to share their knowledge about water issues, their primary role involves listening to visitor’s stories. Matteson and Kloecker cited the common detachment of scientific research from the actual experiences and histories of the communities impacted and strive to lessen the disconnect. Matteson says they aim “to amplify stories that we hear, and especially stories that we feel are marginalized by mainstream media or public planning processes.”

Where does our tap water comes from?

In a typical flight at Water Bar there is one groundwater (water from below the earth’s surface in aquifers) and one surface water (water found above the earth’s surface in lakes or rivers). Groundwater, while relied upon by many residents of Minnesota, cannot be recharged quickly, leading to issues of scarcity and depletion. Both groundwater and surface water are susceptible to contamination from agriculture and other pollution.

A majority of the tap water in Minneapolis and St. Paul comes from the Mississippi River. While the water sources vary depending on where the bar pops up, visitors might encounter Schmidt Organic Water, formerly a brewery. The owners now maintain the pipes connected to a 1,100-foot deep Mount Simon-Hinckley aquifer containing 30,000-year-old water. Visitors might also find Buhl Water which is water that is untreated and comes from a 700-foot deep aquifer located on the Iron Range in Minnesota. 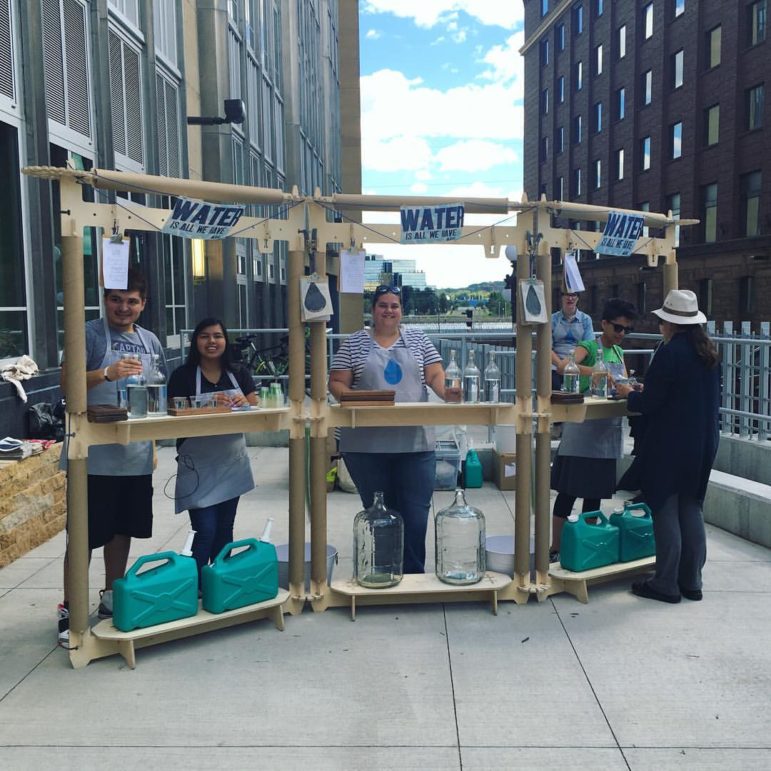 During a “pop-up” bar outside the storefront on Central Avenue, groups of students, workers and early voters stopped to sample two flights: one of water from pipes connected to the 1,100 foot deep Mount Simon-Hinckley Aquifer containing 30,000-year-old water, and the second flight from the city of St. Anthony Village’s drinking water originating from the Jordan Aquifer. In 1981, the city’s water was found to contain high levels of suspected carcinogen trichloroethylene (TCE) traced from the Twin Cities Army Ammunition Plant located nearby. The discovery of TCE in the tap water led to a suit filed by the city of New Brighton against the U.S. Army and the largest groundwater cleanup effort in Minnesota history. By and large, access to reliable fresh water remains precarious.

“When we started Water Bar it was before Flint, Michigan, was talked about, so people weren’t really thinking about drinking water in a way that they are thinking about it now,” Matteson says.

The water crisis in Flint began in April 2014 when an unelected emergency manager selected by the Michigan governor changed the origin of the drinking water from Detroit’s water system to the corrosive Flint River in an effort to cut costs. As a result, the river water corroded the pipes and poisoned the city’s drinking water with lead. Despite concerns expressed by residents about the quality of the drinking water after the switch, city and state officials did not take action. Residents reliant on this tap water have seen an outbreak of Legionnaires’ disease causing at least 12 deaths, lasting health complications from severe lead poisoning and still some of the highest costs of water in the nation.

“What happened in Flint is an example of how bad decisions – and misplaced – priorities have an effect on people,” Kloecker says.

Flint residents are majority Black or low-income, so the decision to switch Flint’s water supply was not only bad, the decision occurred within a long legacy of environmental racism that denies and diverts basic protections away from the most oppressed in our society. Race and class disparities in the United States also translate into systemic disinvestment of infrastructure among communities with racially concentrated areas of poverty. When that disinvestment occurs with water infrastructure, like in Flint, such communities experience decreased access to clean, treated, reliable and affordable water.

Given the current national discussions on water quality, questions from Water Bar visitors about water quality have become more prevalent as of late. As geologist and water-tender Carrie Jennings says, “If most of us don’t even think about where our tap water comes from, we certainly don’t worry about where someone else’s comes from.”

To build awareness of water, Water Bar uses place-based art and design to encourage people to envision their connection to the Mississippi River. Matteson noted the tendency to simplify the meaning of place, but that it remains integral to consider the complex ecologies of the land, people and water that make up a place. Water Bar’s storefront is currently serving as one of four early voting sites in Minneapolis and Matteson says this is not a coincidence.

“In the past, we’ve had our elected representatives tend the bar to listen to people’s concerns about water and to share information about what they’re doing at the city or state level to address those concerns,” Matteson says, “in a space like ours, the conversation and connection happens across a table and not in an auditorium or banquet hall, and that’s an important difference.” 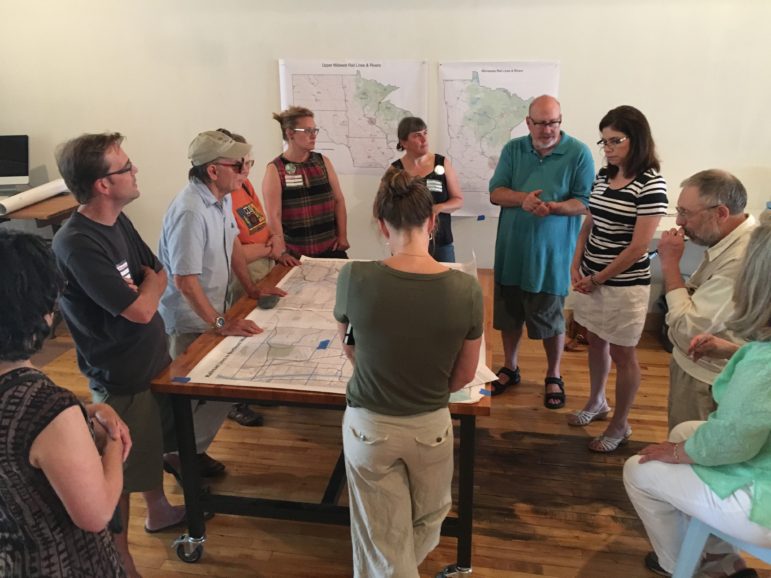 Writer, artist and community elder, Amoke Kubat describes the magnetic effect Water Bar is having on her neighborhood.

“What I think Water Bar is doing is really excellent,” Kubat says. “It is bringing all our stories together. It has been a connector on various levels around just conversations about water, or art making.”

Facilitating a community space like Water Bar begins by acknowledging the existing relationships different folks have to power and place, which is too often violated by well-intentioned, privileged, white-led, artist-driven projects that perpetuate a violent history of colonialism and displacement. Matteson hopes that her bar, the land and water, tell a story of the people who have already existed here.

“Our role is not to tell people what this neighborhood means,” Matteson says. Building equitable collaborations involves listening continually and gathering the right tools and platforms so that “people feel comfortable asking questions and also sharing what they know. Those are two things are missing from a lot of community projects,” Matteson says.

Now a regular visitor, Amoke Kubat first came to Water Bar seeking information about water. She describes her questions as stemming from having a “Flint moment” and needing to be fully informed about her water source and quality. When moving into a Northeast high-rise last year, she turned on the tap water in the morning only to find brown water gushing forth. After a long self-driven investigation she found that a pipe had burst down the street and the city turned off the water without notifying her. She wondered if she would have ever been informed had she not asked persistent questions. This incident catalyzed her commitment to disseminating more information about water, specifically to mothers, so they could find support, empowerment and healing.

“I tend to view my life as an example of learning and sharing what I learn with other people,” Kubat says. As the organizer of YO MAMA! The Mothering Mother Institute, an art-based gathering for mothers, Kubat shared stories of how water influences her artistic and spiritual commitments. In a community health class, Kubat was asked to create a map of an area, “I did North Minneapolis, right around Broadway and Emerson area,” she recalls, “they said, ‘what is missing out of this community?’ I said that ‘there is no art-based communities for mothers, no place to go where they can take young children.’”

Taking matters into her own hands, Kubat organized YO MAMA! to initially focus on creating tools for healthy living and conversation around the role water plays in improving health.

After conversations with Matteson, she proposed organizing an evening for mothers to dance, drink water and ask questions. What followed was an event called “Gyrating & Hydrating” at Water Bar where mothers of all ages and abilities gathered to sip water cocktails with fruit or mints and dance. Questions flowed through the evening including: “How safe is our water? Could Minneapolis become another Flint?”

Kubat says her practice revolves around one basic truth.

“The human body needs water,” she says. “I mean if we don’t have water, we cannot exist and I think many people have come to a point that…[we] forget the importance and vitality that water brings your body. At this point, water is medicinal.”

While the water-tenders are generating conversation around water issues at the bar, the Public Studio of the space functions as an art space supporting artist-driven initiatives. Recently, Water Bar distributed artwork created by Dylan Miner and the proceeds went to the “water protectors” at Camp of Sacred Stones in North Dakota in solidarity with their efforts to resist the construction of the $3.8 billion Dakota Access Pipeline. The company plans to build the 1,170-mile long pipeline to transport crude oil across the Midwest through sacred Indigenous burial sites. If the pipeline were to rupture, it would contaminate drinking water for millions of residents in its path. They intend to use the space as a resource for similar initiatives that require immediate organizing and response.

“In the storefront we want to have the creative tools of art and design so that people can come in, learn new skills and then use those skills to talk about water issues that matter to them,” Matteson says. “We need to be collaborating more as a society, because these problems are huge, and the things we need to figure out are too big for any one organization or sector.”

When asked about the long term vision for Water Bar, both owners say it’s an ongoing process.

Clarification Oct. 28, 2016: A previous version of this article stated did not clarify that both groundwater and surface water are susceptible to pollution and agricultural runoff. The article has been amended to better explain the relationship.