The number of reliable, smart restaurant reviewers in this town is dwindling down to a precious few. Crowdsourcing is great and all that, but chefs deserve better than amateurish reviews by us blog hacks and Yelp-ers. What if other types of artists had to rely on the general populace to critique their work? “Went to the Walker and saw some stupid painting of blue blobs that were supposed to be horses. What a ripoff! Don’t waste your money at this dump.” Rating for Franz Marc: ½ star.

That said, it sure is handy to check Yelp or Urbanspoon when you want to find someplace cheap to eat real quick, which is why my cousin Lisa and I ended up at Michelangelo’s Masterpizzas recently. Yes, “Masterpizzas,” get it? 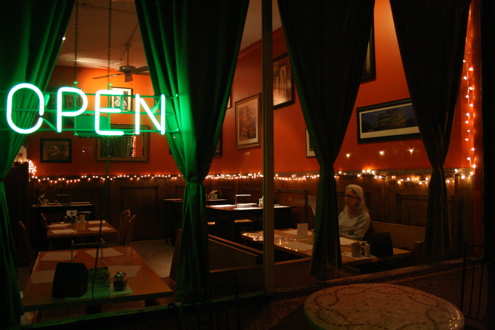 The criteria I entered into Yelp were: (1) near 50th and Xerxes in Minneapolis, (2) cheap (one dollar sign), and (3) open now. If I had entered “$$” instead of “$,” the new, trendy, spendy, creative, crowded Pizzeria Lola would have shown up in the results. But money doesn’t grow on trees, so we went to the old, un-trendy, cheap, un-creative, absolutely empty Michelangelo’s. If that sounds like an unfavorable comparison, it is not.

Michelangelo’s has been around since God was a child. Marty Davis bought the place in 2004. He was a kid when he started delivering pizzas there in 1990; George and Harriet Horner ran it from 1986 to 1992, when it was called, less cleverly, “Horner’s.” Before that, the history gets little murky: rumor has it that local children’s TV star Casey Jones owned it for awhile.

“One time an older lady stopped in and said she used to work at the paint store next door, where Banners 2 Go is now,” says Marty. “She said this was a pizza place back in 1962. That’s as far back as I’ve heard about.” Marty bought it from David Stein, who bought it from Peter Kelsey, now of the New French Bakery, formerly of Sidney’s and the New French Cafe. 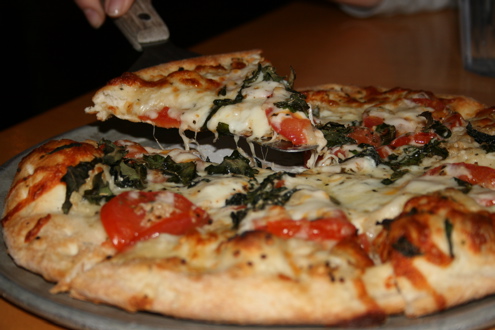 At the time I Yelped it, there were only eight customer reviews for this venerable establishment; there were 54 reviews for the one-year-old Pizzeria Lola. You’d think from the fanfare around Lola’s opening that southwest Minneapolis had been starving for pizza for centuries. Why didn’t people just go to Michelangelo’s? It’s good, competent pizza. The atmosphere is pleasantly old-school. But, two things: no wine, and no trendiness.

The wine problem is easily solved; you can bring your own, no corking fee, and Marty is hoping and praying for a wine and beer license sometime soon. The trendiness issue is a little trickier. You can see for yourself that Michelangelo’s website is deeply pedestrian, whereas Lola’s could not be more au courant, right down to the well-lit video of the owners’ fashionable weimaraner. You can google numerous accounts of the Ivy League credentials and stylish pizza scuola-training of Lola’s owners, but not one word about how Marty Davis worked his way up at Runyon’s from bar back to manager, always dreaming of owning his own pizza joint. 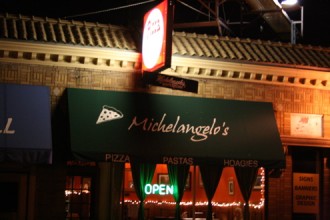 “I left Runyon’s around the time when Paul Runyon sold it in 2001,” says Marty. “After that, I did construction with my dad and raised my daughter. Then one winter day in 2004, I was plowing the parking lot of Michelangelo’s when Dave Stein came out and said, ‘You’ve gotta buy this place.’ So I did. Just like that.

“I didn’t even know how to make a pizza when I walked into the kitchen. All I had done up to that point was deliver the pizzas. But I learned from the cooks and kept trying new things. I redesigned the dining room and got a terrific waitstaff. All our sauces are homemade–not one thing is dumped out of a can. I’m really proud of our pizzas, and I love to see the smiles on the faces of our customers.” 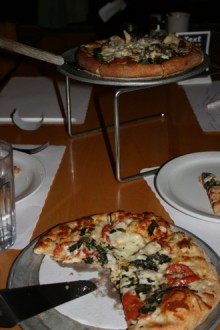 So here’s the case for crowdsourcing: If it weren’t for Yelp and its ilk, how would you even know about Michelangelo’s? I couldn’t find one single professional review of it, even from back before most of the great food critics got laid off. Don’t get me wrong, Pizzeria Lola is wonderful, and I’m a huge fan of crazy items like kimchi on pizza. But sometimes newness and trendiness make a person long for something that’s been around the block a few times and doesn’t feel like making a big deal out of it.

At Michelangelo’s, cousin Lisa and I had two of the hand-tossed, olive-oil based pizzas: one Greek and one Roma-Garlic-Basil. The Greek had Spanish olives on it, which was distinctly un-trendy, but if you take “Greek” pizza to be more of a Platonic ideal than an actual replication of something you’d have in Greece, the olives were just fine. The crust was nice and chewy and not too sweet. 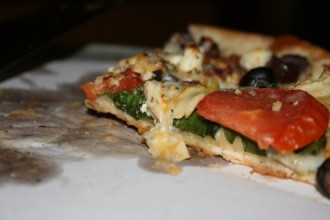 “We put a little honey in the crust, no sugar,” says Marty Davis. “We’re very health-conscious.” We asked our waitress for a taste of the tomato sauce, since we had ordered our pizzas without it. It was fresh-tasting and, like the crust, not too sweet. An excellent feature of both pizzas was that when I had the leftovers for lunch the next day, they were even more delicious than the first time around.

“I hear that a lot,” says Marty. “We put basil and oregano in the dough, and I think maybe the flavors blend even more by the next day.” 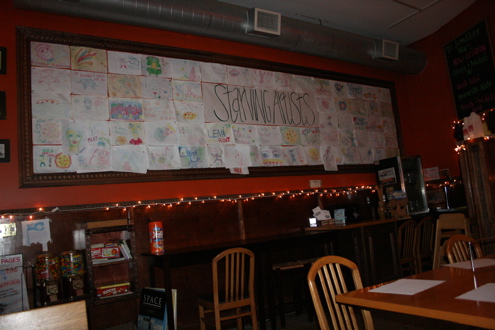 Another fun, un-trendy thing about Michelangelo’s is the “Starving Artists” wall, which will make you want to have kids and bring them here if you don’t have them already. Your nice waitpersons will display the doodles you’ve crayoned on your placemats, and then you can point to them on repeat visits and act like a know-it-all regular. 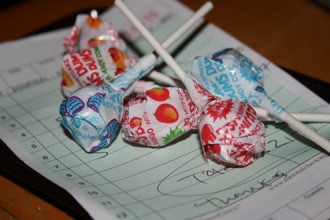 What does Marty think about his new competition, six blocks down Xerxes Avenue? “Oh, I like Pizzeria Lola a lot,” he says. “Of course, I don’t go there too often. It’s kind of pricey for me. But the more restaurants we have around here, the merrier. I love this neighborhood, and I want to see it keep getting better.”