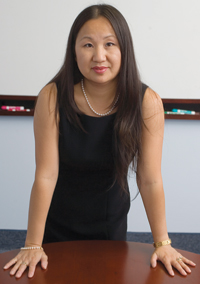 Christianna Hang is ready for this fall’s opening of the Hmong charter school she helped found.

By just about any measure, Christianna Hang is a success. After graduating from high school in the top 10 percent of her class, she worked her way through night school at the University of Minnesota, earning her bachelor’s degree in organizational management. She eventually earned her master’s degree at Concordia University, and went on to found the country’s first Hmong-focused public school, which after two years is flourishing. So why does she consider herself “the black sheep of the family?”

Well, it’s just those things-advanced education and a successful career-that lead Hang to describe herself that way. Although she is married with four children, she bucked Hmong tradition by going to college and having a career, rather than playing the role of a stay-at-home wife and mother.

A rocky start
Hang’s accomplishments are impressive on their own, and given her early life, they are nothing short of amazing. Born in Laos during the Vietnam War, she was one of 10 children. Six of her siblings died in Laos; the remaining family members escaped to Thailand in the early 1970s. Hang’s older brother established himself in Hawaii and sponsored the rest of the family. They moved to Hawaii in 1980, but it was anything but paradise for Christianna. It was there that she began school for the first time. She was excited to begin, but that excitement soon turned to dread; she knew no English and had had no formal schooling. “I didn’t know my ABCs from my 1-2-3s,” she recalled.

Lack of formal schooling wasn’t Hang’s only challenge. She and her brother were the only Hmong students in the school and the only children who didn’t speak English. She recalled being beat up every day on the way to and from school. The other kids teased and bullied her, yet when she approached her school’s principal about the situation, he told her she was lying.

“He didn’t believe that my black-and-blue eyes were from the other students. He said that I probably just fell down. He told me that American kids didn’t do things like that,” Hang said. She found herself wishing she had never started school.

Turning it around
That changed when her family moved to St. Paul in 1982. The patience and support she received from English as a Second Language (ESL) teachers helped her quickly learn to read and write. “I was an aggressive learner,” Hang said. “And I knew that someday I was going to make a big difference in the community because of it.”

That “someday” began in 2004, when Hang opened the doors of the brand-new Hmong Academy charter school to 200 ninth and 10th graders. Last year the school added grade 11, and this year it will add grade 12. Approximately 400 students will be in attendance.

It hasn’t always been smooth sailing. Hang more than had her work cut out for her when the school opened in fall 2004. Only 20 percent of incoming students that fall passed the Minnesota Basic Standard Tests. A year later, 95 percent passed. Hang is proud that Hmong Academy catches students who, at other schools, were falling through the cracks. She is also proud of the safe environment the school offers: Not one fight has broken out. In response to community requests, the school recently moved from its Minneapolis location to a new building on Brewster Street in St. Paul, which Hang considers the heart of the Hmong community. Approximately 75,000 Hmong live in Twin Cities, and the majority of them call St. Paul home.

Christianna’s vision
She is not content to rest on her laurels; Hang is in the process of transforming the school into a K-12, or what she calls a “one-stop-shop.”

The average Hmong family consists of five to nine children and Hang wants the school to fulfill the needs of the larger families all in one location. “The students and their families are my business partners and catering to their needs is the key to success,” Hang said. “I don’t want families to have to send their five children to five different schools.”

She also wants to make sure that people understand that the Hmong Academy is not just for Hmong students. The school was created for the community by the community, and with a Hmong culture component. “The school is for anyone-or I should say, any student who is ready for rigorous college prep,” Hang said.

She wishes there would have been a place like Hmong Academy when she was growing up, and that’s what keeps her so dedicated to making it work today. If there had been such a school, Hang said, she would have grown up with a stronger sense of her Hmong-American identity. She wants the school to provide a solid connection between Hmong heritage and academics and create a sense of pride and self-identity. “If you know who you are, you’ll always know where you’re going,” she said.

Looking forward
Currently Hang dedicates most of her time to expanding the school and getting ready for the upcoming school year. When she’s not working, she spends her time with her husband and children. And this fall she herself will be going back to school. She’ll be studying online for her doctorate in superintendency and K-12 educational management.

She also loves being active in her community and getting her family involved too. Her future goals include running for public office, and expanding Hmong Academy nationwide or even worldwide-but not necessarily in that order.

Speaking of public office, Hang counts Mee Moua, the first Hmong-American to serve in the Minnesota Legislature, as one of her role models. And what better role model for the teenage girls of Hmong Academy than the dynamic Hang herself?

She sees many changes in the Hmong community. “You can’t expect your culture to change overnight,” Hang said. “But we’ve [Hmong women] come a long way.” Hang wants to see other Hmong women and girls succeed, and she thinks there are two keys to success: tenacity and education. “Just believe in yourself,” she advised. “The opportunity is there if you want it.”