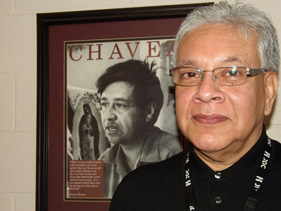 Rebel educator Larry Lucio is retiring after more than 40 years of service to students in Minneapolis and St. Paul. (Photo by Harry Colbert, Jr.)

It is said that a society (or a person) shall be judged by what it (or he or she) has done for the least of its citizens.

If in fact that is the case, then Larry Lucio shall be looked upon with much favor.

The veteran educator, with more than 40 years of shaping young minds to his credit, has dedicated his career – and in many ways, his life – to serving students who were previously given little chance to succeed. Lucio, the state’s first Latino principal, time and again requested to work in schools with populations of underachieving students – many of whom were students of color. Continuing his commitment to serve those in the most desperate of situations, for the past six years Lucio has been charged with educating teens housed in the Hennepin County Juvenile Detention Center.

It has been his most rewarding assignment thus far, he said.

“When I came here six years ago the facility was on corrective action by the state of Minnesota; and deservedly so,” said Lucio of the school inside the detention center, known as Stadium View School. “So I was given the responsibility to improve the education here.”

Lucio said when he arrived at Stadium View, which is run by the Minneapolis Public Schools, the school was in total disarray.

“There weren’t up-to-date learning materials here so I requested text books, but when I got the text books they had covers missing, graffiti, pages missing,” said Lucio. He immediately protested. “We made it a point to see to it that if ‘Johnny Jones’ in one school had access to materials then ‘Jimmy Jones’ here should have the same access. We’re a secondary school that just happens to be inside of a detention center.”

Lucio said to the school district’s credit, it responded affirmatively to his request – and the many subsequent requests. Today, Stadium View has a technology lab with several computers and an extensive reading library.

In addition to being a school within a detention center, Stadium View has the added challenge of only having students for a limited time. The center houses youths for an average of between eight to 20 days, after which the juveniles are typically transferred to long-term facilities in the state.

“The question became what can we really do with these students in that short of time,” said Lucio. “We don’t educate in a traditional model; we believe relationships with kids is utmost important. My colleagues have a relationship and trust with these kids. I tell staff it’s more important to create relationships first and work with every student on and individual needs level.”

“Education people use the term mental health; we use the term social support,” said Lucio. “Oftentimes what we see is the reason these kids come here is what was missing was support. We’re working hard to get (Stadium View students) to see the light at the end of the tunnel.”

“We call that re-instilling hope,” said Brenda Johnson, transition specialist at Stadium View. “We try and give them hope that they can return to their communities and be productive citizens.”

Johnson gives all the credit for the successful turnaround of Stadium View to Lucio.

“He’s a visionary,” said Johnson, who said the entire staff – most handpicked by Lucio – is sad to hear of Lucio’s retirement. “He will truly be missed. We’re losing a trailblazer. He talks all the time about how kids come first. When he advocates on students’ behalves for things we need, we get it.”

That may be how Stadium View became the first school housed in a juvenile facility to be designated a Children’s Defense Fund Freedom School. Freedom Schools provide summer and after-school programs with a goal of increasing students’ self-esteem, and generating more positive attitudes toward learning. The Children’s Defense Fund grew out of the Civil Rights Movement under the leadership of Marian Wright Edelman; the first African-American woman admitted to the Mississippi Bar.

“I believe the education system to be innately racist and classist,” said Lucio. “As a young kid growing up in the (19)60s I heard politicians always talking about poor people and that encouraged me. Today in politics and education, all we hear is middle class, so in many cases we’re so concerned about the middle class at expense of the poor. For me, I tended to focus more on the communities of color and I’ve been blessed to work at schools with large student populations of students of color.”

And though June 28 is Lucio’s official last day, do not think this rebel educator from West St. Paul (or West Side as he calls it) will simply fade off into the sunset.

“My daughter is a teacher, so I’ll be her glorified classroom assistant,” joked Lucio. “But I want to go back to my community. For me, that’s where it all started.”

Lucio will be honored for his works during a retirement celebration on May 29 at the Neighborhood House, 179 Robie St. E., St. Paul. The celebration takes place at 4 p.m.