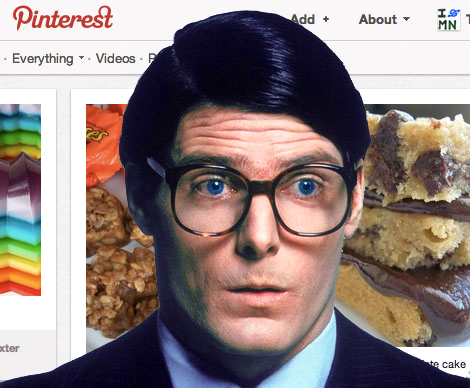 Today on the Zeus Jones blog, Becky Lang argues that the hot new social networking site Pinterest is suitable for some brands—”products that have a connection to the world of design, emotion, inspiration”—and not others (“Products like, say—aspirin, are going to feel out of place unless you get real creative”). Are news organizations like the Daily Planet brands that should be on Pinterest?

I’ve been devoting a modest amount of effort to maintaining an account for Twin Cities Daily Planet arts coverage on Pinterest—my “brand strategy” has been to pin interesting visuals from our Tumblr (since our main website doesn’t support images that Pinterest considers “large”) and to repin stuff that catches my eye. It’s been an interesting experiment, and people seem to like the account fairly well. I think it’s worth the few minutes I spend on it every day, if only to keep me personally abreast of what people are doing on Pinterest. My strategy for the Daily Planet has been to keep pretty low-key, so even if it’s not a natural venue for our coverage (yet), I don’t think we’re out there embarrassing ourselves like Honda did with an insulting and ill-conceived campaign (in brief, they went on Pinterest to tell people to get off Pinterest) that Becky appropriately skewers.

I’ve been learning about how people use Pinterest, but one reason I pin things that are somewhat off the beaten path for most Pinterest users—concert photos, portraits, stuff that “plays” better on Tumblr or Instagram—is that I have a hunch Pinterest will evolve. The site has at least two powerful and distinctive features:

(a) A visual interface that strikes a good balance between Tumblr’s dashboard and its archive view. Scrolling through a Pinterest feed is kind of like playing four bingo cards: fewer would be too boring, more would be too many. It’s deliciously addictive, even if you don’t actually cook the food.

(b) A tagging system (you pin your content to topic-specific “boards”) that makes it easy to follow and unfollow particular streams coming from the same person. If you really just want to see food and style-related posts from the Daily Planet, you can easily unsubscribe from our music and theater boards. Think about how slick a system like this would be on Facebook: you could subscribe to your cousin’s family photos, but unsubscribe from his political rants. Right now, news publications on Twitter (us included) generally maintain different accounts for different coverage topics; Pinterest is a model for how to elegantly bundle independent content streams from a single user.

In short, Pinterest is so well-designed that I suspect its uses will evolve, possibly very soon, and it might quickly become a news source in the same way that Facebook and Twitter have become news sources. It’s not there yet, but it might not be too long before images of war and famine might start popping up among those cupcakes and Jell-O shots.