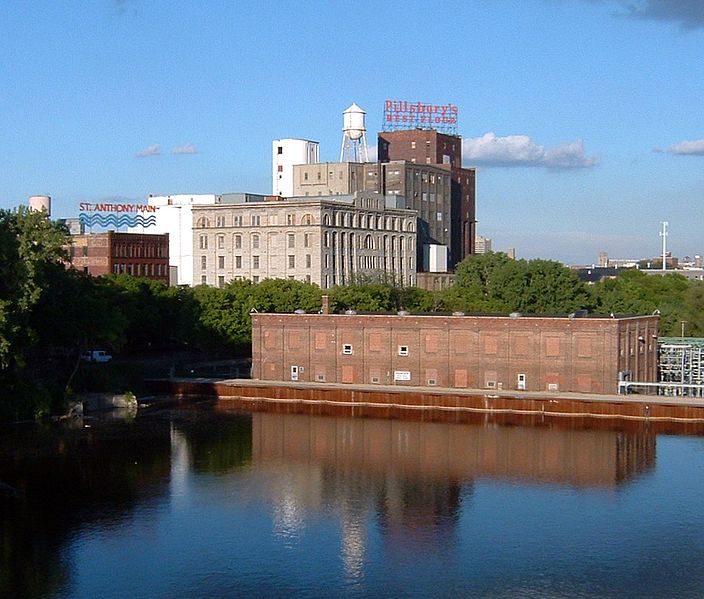 This work has been released into the public domain by its author, Mulad.

It leaked, it stank, but it sang.  Entering the dank, dark passageway into the empty Pillsbury A Mill, National Trust and city officials, media professionals, preservations, and neighborhood activists were greeted with an distinct musty smell and puddles.  Built in 1881, the building’s roof obviously leaks in spots.  Its gray limestone front lists a bit.  It’s braced with steel and huge wood beams, but there’s hope that it will join its neighbors across the Mississippi soon in becoming  a choice spot to live.  That was the message delivered June 15 to hardy souls who braved pouring rain to turn out for the official announcement that Pillsbury A Mill is now on the National Trust for Historic Preservation’s most endangered list.

Despite the smell and the darkness, the event was a demonstration of the old saying, it takes a village to make anything happen.  Gathered around the media’s glaring lights were an array of citizens who believe the Mississippi River and its immediate historical environs are a city treasure that needs both protection and preservation.  East side activists smiled inwardly as some referred to the A Mill area as on the north side of the river.   Here, the river runs east and west, with E. Hennepin Avenue dividing NE and SE Minneapolis.  There’s pride in the fact this area is the oldest part of the city.  East side activists want to preserve landmarks such as Main Street and the Pillsbury A Mill in this historic area.  Old St. Anthony—a village before Minneapolis was even an idea—abuts the University, which also has close Pillsbury connections. (Pillsbury was a University regent, as well as state senator and governor, and helped to get the University designated as the state’s official, and publicly supported, land-grant university.)

Efforts to preserve the A Mill began long before the mill ceased operations in 2003.  It was added to the National Register of Historic Places in 1966, around the time a forward-looking citizen bought and renovated the 1890 building on Main Street and opened the restaurant Pracna on Main.  The St. Anthony Main development followed soon thereafter.  Earlier,  a group of Northeast Minneapolis activists stopped a proposed freeway from desecrating an old Northeast  neighborhood along the river and others later envisioned the renovation of Nicollet Island, including an old factory that is now the Nicollet Island Inn, and supported new housing and retail along East Hennepin.

Meanwhile, other activists were successful in replacing the old Hennepin Avenue bridge with the beautiful Father Louis Hennepin Bridge in 1990. The bridge is named for the first European to see the falls and write about them in 1680, who named them St. Anthony Falls in honor of his patron saint.  Later, in the 1990s, other Southeast and Northeast Minneapolis activists, with the assistance of the Minnesota Historical Society, succeeded in re-opening the Stone Arch Bridge, built by railroad magnate James J. Hill in 1883 to serve the mill district on both sides of the Mississippi.

In 2003, after the A Mill ceased operations, Kit Richardson of Shafer Richardson, a development organization, acquired the property and began planning East Bank Mills, an upscale housing project with the A Mill as its centerpiece.  His vision inspired the Marcy-Holmes Neighborhood Association in SE Minneapolis to support efforts to save the A Mill and develop the property surrounding it.

Richardson’s dream went sour with the collapse of the real estate market, but he persevered, hosting tours of the mill, treating anyone interested to the views and the potential of the waterways underneath the mill, and warning everyone that the old mill could end up like its sister across the river, which burned  down.  Luckily, city officials saw the potential of that mill’s burned-out shell .  It now hosts the Mill City museum and an architectural firm in a very modern contrasting structure.   East Side activists believe a renovated A Mill is a needed counterpart.

With this week’s announcement that the A Mill is now on the national endangered historic places list, activists are relieved but wary.  Can the developers who now share ownership of the whole East Bank Mills property –the Doran Companies and Dominium—realize the potential of the property?    Will the excitement generated by the National Trust for Historic Preservation’s announcement provide fresh enthusiasm and support for giving the A Mill new life?  Will city officials care as much about this mill as the one that burned across the river?  Stay tuned.