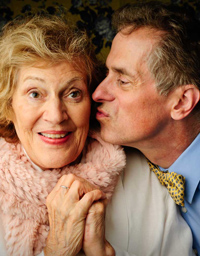 Vigil is a very odd little play now playing at Pillsbury House Theatre, written by Canadian playwright Morris Panych. I don’t quite know what to make of it. It’s very dark; at times it’s absurd, and at other times poignant. The first act is extremely boring. The second act is more entertaining, with a number of plot twits that I won’t reveal here. Should you go see it? If Harold and Maude is your favorite movie, then yes. Otherwise, I’d skip it.

The play centers on the character of Kemp, played by Steve Hendrickson, who shows up at his aunt’s house after receiving word from her that she is nearing death. (His aunt Grace is played by Shirley Venard.) Kemp expects his Aunt to die within a few days, but instead she keeps on living.

Grace hardly speaks at all for most of the play, so it ends up being a very long monologue performed by Steve Hendrickson, framed by cinematic blackouts with musical interludes written by Greg Pliska. Hendrickson is a wonderful actor and his portrayal of the angst-ridden Kemp is complex and engaging, if at times painful to watch just because the character is so tormented internally.

Venard’s performance of Grace is perhaps even more commendable, simply because she has so few lines and so has to create an entire character based on her reactions and body language. In a way, though Kemp does the majority of the talking, Vigil is Grace’s story. The whole time we are watching the play unfold we’re trying to figure out what is going on with her, and also rooting for her, though we don’t know what she really wants until the end.

One strange aspect of the play is the playwright’s tendency to repeat comedic gambits. For example: there’s one joke that is repeated with many variations where Kemp is conversing with Grace and then all of a sudden he says something to show his impatience about her dying. He’ll say “do you want to be cremated?” which is followed by a blackout, or “we should discuss your organs?”, followed by a blackout.  This is funny the first couple times it happens, but after a while it gets tedious.

A similar gag has Kemp thinking of ways to murder his aunt. His first idea is hilarious (a kind of do-it-yourself euthanasia contraption) but then when he tries again several other times, it got less funny.

I did quite like the set and lighting design by Joe Stanley and Michael Wangen, respectively.  Stanley’s clutter-filled set conveys a good sense of the years and years of personal history being piled up, and there was quite a nice sequence using back lighting behind a scrim (shown to be windows covered with bits of newspaper), where one particularly funny action took place.

For this production Pillsbury House Theatre is partnering with the Minnesota Creative Arts and Aging Network, which aims to expand opportunities for creative expression for older adults through the arts. The partnership seems appropriate because the play does deal with the issue of elders’ need for engagement, for human relationship. MnCAAN will be participating in post-show talkbacks on September 11, 16, and 25; and October 3 and 5.