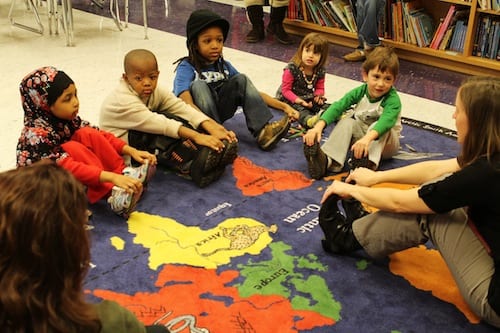 Minneapolis will be opening its first site-governed school next fall since the state passed a law to allow the model in 2009. Pierre Bottineau French Immersion, located at the Jordan Park building in North Minneapolis was supposed to open this year, but due to a number of factors including the tornado that hit the area last May, postponed it’s opening until next year. The school has already filled enrollment for two kindergarten classes and will also be offering a first grade class and a second and third grade combined class.

According to the state statute, which the Minneapolis Teachers’ Federation helped to pass, a team of teachers may propose a new self-governed school that could be in operation through the local school district. According to Sara Paul, the director of New Schools for MPS, said that while the state didn’t offer any startup funds for self-governed schools, so the school district provided some of those funds. Pierre Bottineau will have accountability through the district, she said, including meeting milestones in terms of achievement. The district will also have oversight for what’s happening with the money received by the school, she said.

The school gets “more accountability in exchange for a higher level of autonomy,” she said. The district gave $300,000 to the school in startup funds, according to Paul.

Pierre Bottineau has a three year contract, and if they don’t meet the expectations, the contract won’t be renewed, she said. The students will have to show proficiency and growth, she said.

According to Paul, MPS is interested in using Pierre Bottineau as an experiment in improving the performance contract, which might be used in other schools later. “We want to get it right with the autonomous schools first,” she said. “It’s a really good process. We can be very clear on the front end. There’s a lot of value in that.”

Christina Maynor, Pierre Bottineau’s Teacher Leader, was out of the country when the original call for proposals went out in 2009. At that time, the teachers’ union and the district were saying to Minneapolis staff “if you have ideas, now is your opportunity,” Maynor recalled. She received a phone call from a colleague, Gaelle Berg, a world language specialist for MPS. “She had been thinking about French Immersion as a tool to serve the diversity of Minneapolis,” Maynor said. “Speaking another language builds creative problem solvers.”

Berg asked Maynor to be part of the application writing team. Maynor had been a French teacher in the district for 10 years, at Patrick Henry High School. Also on the team was JoEllyn Jolstad, a family liaison for Bryn Mar and Anwatin, as well as Barbara Anderson, who had worked with the Normandale French Immersion program, and wanted to bring her own personal expertise to Minneapolis, where her children went to school, Maynor said.

They received a $10,000 grant, in order to develop an application to present to the school board, which they did in the fall of 2009. Maynor said the board told them that the application was very strong, but that they needed additional information in certain areas. So the team continued working, meeting at each others’ houses, consulting with the University of Minnesota, and conducting focus groups.

Three of the four application team members lived in Zone 1 of the district, and they realized that MPS was only looking for schools that would be successful in North Minneapolis, Maynor said. So, the team members began meeting families at Cub Foods, and at the library, asking parents what they were looking for in a school, and if they would be interested in a French Immersion model. “We got a really favorable response from families,” she said.

Maynor said they weren’t interested in just plunking themselves down in North Minneapolis. Rather, they hoped to “engage the community,” and find out what parents were looking for.

Starting last year, they started having monthly family events, where families would get together and have a French lesson. “They’ve been really popular helping families connect to each other,” Maynor said.

From the very beginning of the process of writing the application, families immediately began asking very specific logistical questions, Maynor said. Would there be uniforms? What would the hours be? Would there be an after school component? “People needed to know the logistics to even consider it,” she said. But in the early phase, they didn’t have those answers, so they worked with the district to nail down the logistics, so they could start asking deeper questions.

On March 14, Pierre Bottineau announced that they had reached more than 70 students in their enrollment. According to Maynor, there were even more students who had chosen the school as their second choice. 75 percent or more of them were students of color, she said, with African American students being the largest group. “We feel like we are reaching our goal and vision for the school right away,” she said.

As part of the state statute for being a self-governed school, Pierre Bottineau will have autonomy in five areas. One of those areas is curriculum. They also have freedom around staffing and work rules, which need to be negotiated with the federation’s bargaining unit. Starting in December of last year, the school began meeting regularly with the union, Maynor said.

“It was union that proposed this legislation with the state,” Maynor said. “Their interest is to show that teachers really are in a position to make excellent choices. We understand teaching and learning.” The teachers will work a little bit longer day, with a little more pay, Maynor said, and will make a commitment of three years, as well as working extra days for development work.

Next month, they’ll be drafting up the contract, which she said will include requirements for a certain number of students needing to show excellent growth in reading and math. The measures, she said will be based on standardized tests. If the school doesn’t do well, then their three-year contract won’t be renewed.

The autonomy plays out in the school’s governance model, which allows the school to choose a principal, if they want, or have a teacher cooperative, or any professional practice model they decide. Because of their logistics, needs, and budget, they’ve chosen a Teacher Leader model, with Maynor taking on the role of the Teacher Leader. “For all intents and purposes, the Teacher Leader is like a principal,” she said, which is possible because it’s one of the smallest elementary school programs in the city.

There’s no requirement to have a licensed principal, so the school’s board can choose an alternative. Maynard said she was chosen because of her leadership work as a teacher in Minneapolis. The board is also planning on hiring an administrative manager, to help with the running of the school. Other staff include five teachers, a family liaison, a behavior specialist, as well as staff specializing in special education and English Language Learners.

The school was going to open last year, but because of a number of factors, including the tornado that happened last May that affected enrollment, it will open for the first time in the fall. However, because they were supposed to open last year, they will have a combined second and third grade class, in addition to at least two kindergarten classes and a first grade class. They combined second and third grade class, she said, fulfills a promise made to families last year that their children would have a spot.

The French Immersion model has been used for 35 years, Maynor said. It’s used all over the United States, and has shown great results especially in Milwaukee, where 2/3 of the students are on free or reduced lunch, and yet topped the whole district with their test scores. “You’d think it would be overly confusing,” she said. “But kids brains at that time thrive on the challenge. They are engaged by the novelty of it.” For math, students learn in French, but when they work on their homework at home, with parents in English, they begin to “understand math in two languages,” she said. “It makes the concepts really solid in their brains.”

Victoria Christian is one North Minneapolis parent who is very excited about her children going to Pierre Bottineau. She had planned to send her eldest to the school last year. Two of her children will enrolll this year, one in first grade and the other in the combined second-third grade class.  She plans to send her third child to kindergarten the following year.

Christian was attracted to the idea of immersive education, especially because her husband is from the West Indies, and his mother speaks a French-based dialect. She thinks it will be great that her children will be able to communicate with their grandparents, but more than that, it will “open doors to so many opportunities for them,” she said.

Christian works as a social worker in Hennepin County, and said she has an “inside track perspective” on raising kids. She herself had a traumatic childhood growing up, with parents who were chemically addicted. “That motivated me to expose my kids to so much more,” she said. She tries to let her kids be kids, and tries to give them cultural opportunities, such as driving to Chicago to see the Field Museum.

Christian believes the school will put a lot of power into parents’ hands. “Some people are afraid of that,” she said. But, “it’s so empowering.”

The other day, a woman was taking a picture with an old-fashioned, non-digital camera, which her children were enthralled by. “They didn’t even realize,” she said, “that people used to have those types of cameras where you have to load the film and take to Walgreens. Things change so much. Why not Immersion? A lot of initiatives on the North Side haven’t worked so well, have they?”

Another parent, Janette Woessner, is on the community engagement committee for the school. She heard about the school from friends and also from an article she read in MinnPost. “I’m attracted to immersion education for my kids,” she said. “They’re brain development is just better,” she said. “They have higher test scores. They’re constantly thinking. They put together things they know and things they don’ know.” She also feels that her children’s career opportunities will be more wide open with the immersion background, and it will help give them a broader, global perspective. Right now her son goes to Waite Park, which has a diverse population. However, French is “spoken is so many countries,” she said. “Hopefully it frames them to be more global citizens.”

Woessner lives in Northeast Minneapolis, so she’ll have to drive her son to the school, which will be a lot easier once they open the Lowry Bridge, she said.

Woessner doesn’t speak French, but she travels quite a bit, and has gone to London for work. “I can really appreciate that knowing another language makes travelling that much more rewarding,” she said. She also appreciates that Pierre Bottineau is “not a Francophile school,” she said. It’s not just about France, but about all French speaking countries.

As for Pierre Bottineau being a self-governed school, Woessner said, “It will be an interesting experience in the next couple of years. There will be some stumbling blocks. It will affect parents more than our kids’ education,” she said. “I’m looking forward to it.”

She does think that the school’s self government will allow it to be flexible. As a parent on the committee, she’s been busy putting brochures at kids’ preschools, coffee shops, and area meetings.

Woessner said that the French Immersion model will help with the achievement gap, because it puts all kids at the same level, regardless of their English vocabulary starting school.