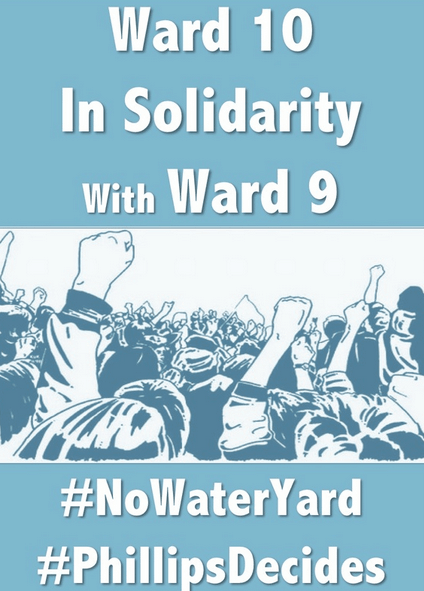 People in the Phillips neighborhoods of Minneapolis are incensed about a new proposed water-maintenance site (or, a water yard) they say will add to the pollution of the area. Seeing little promise of new jobs from the new site, neighbors will be packing the Ways and Means committee meeting of the City Council on Monday to urge council members to vote no on allowing city staff to enter into negotiations over purchasing the property.

“Phillips has been dumping grounds and forget-me-nots of polluters for several years now,” says Jose Luis Villasenor, the Executive Director of the local nonprofit Tamales y Bicicletas. He’s been a resident of East Phillips for 19-20 years. “We have been working with the community and local stakeholders about how to get rid of the polluters.”

The community group East Phillips Improvement Coalition (EPIC) had two realizations when it came to the site, Villasenor said. “We needed to stop it and make sure that communities of color were leading the charge and redefining the narrative around issues of environmental racism.”

Instead of industrialization, neighbors want the city to develop the area “while promoting space for healthy communities,” he said.

While EPIC wants the council to vote no on purchasing the site, “We are saying yes to developments that incorporate a vision of training unemployed residents in green industries,” Villasenor said. Currently, the group is “looking at other developers to purchase that property.”

A graphic cartoon on the Tamales y Bicicletas website offers an explanation about the proposed site. The cartoon says that in Northeast Minneapolis, there’s both a firehouse and a water yard. With the firehouse deemed unsafe, the city has decided to move it to the current NE water yard site, with the old water yard’s operations moved to Phillips. “Why it is always us?” say the people in Phillips depicted in the cartoon.

“Why can’t they stay there?” asks Ward 9 City Council member Alondra Cano, of the water yard’s current Ward 3 location. “Why can’t they spend the $3 million we have to redevelop the property we already own?” The answer, she says, is because the city wants to open up development opportunities in Ward 3, where the water yard is currently located. “It’s the same disinvestment pattern,” she said.

The city began looking at the site, located at 1860 28th Street East and 2717 Longfellow Avenue in 1991. According to Greg Goeke, Director of Property Services for Minneapolis, the process has taken so long because other facilities in Minneapolis took priority and were replaced first. “The city’s money for facilities had to go to police projects,” he said.

Currently, the Water Distribution Maintenance facilities (Water East Yard), are located in Northeast Minneapolis, at 935 5th Avenue SE, with a separate site for for Water Meter Operations based in Fridley. The Phillips site would combine operations of the two sites, improving efficiency, according to the staff report.

Patty Zanski, who lives across the street from the Roof Depot, said she wasn’t aware of the city’s proposed plan when she moved into the neighborhood several years ago. “This is five steps in the wrong direction,” she says. “It just further solidifies the industrialized uses of the neighborhood.”

Zanski is worried about the increased truck traffic that the maintenance site will bring- “I believe it will bring 60-70 trucks into the neighborhood- a good percentage of them diesel”, which will create a “terrible traffic situation,” she said.

Goeke says that he’s aware of the neighborhood’s concerns, but ultimately it’s a policy decision the city council has to make.

The advantages of the new site, according to Goeke, are that it would expand public works operations at that campus, “so public works can cross-utilize people and equipment more efficiently,” he said.

Alondra Cano says that when she learned about the proposed plans for the new water yard site, she immediately said, “No way.” “I ran on an environmental justice platform focused on turning this community around,” she said. “This is a prime piece of land we need to develop that’s transit-oriented.”

Bao Phi, who grew up in Phillips and whose parents still live there, says he spoke to his Vietnamese immigrant mother about the new site, who doesn’t have an internet computer so hadn’t heard about the issue.

Phi told her about the city’s plans, and what the implications were for the environment and the health issues it raised. “She gets the whole public health and pollution thing,” Phi said. “She’s lived here 40 years. She remembers them testing soil for arsenic.”

Phi’s referring to the former CMC Heartland Partners Lite Yard site, which was used from 1938-1963 to produce and store arsenic-based pesticides. After contamination was discovered in 1994 during the construction of Hiawatha Avenue, soil testing was conducted around South Minneapolis.

“Poor people of color in the neighborhood are constantly have to deal with pollution and industrialization,” says Phi. “The burden for housing a facility that has implications for health scares and damage to the environment, which might not be accessible for jobs in the neighborhood is being pushed into the neighborhood without much effort to engage the community,” says Phi. “Where is the research about what other neighborhoods could house this, when Phillips already has so many trucks and pollution?”

Phi denies this is a “Not in my back yard” issue. “The point is, our back yard is already full of that stuff. It just feels like they’re just flipping it in there to a community that already has a huge burden.”

The Ways and Means Committee meeting is held on June 15th at 1:30 p.m. at City Hall, Council Chambers.