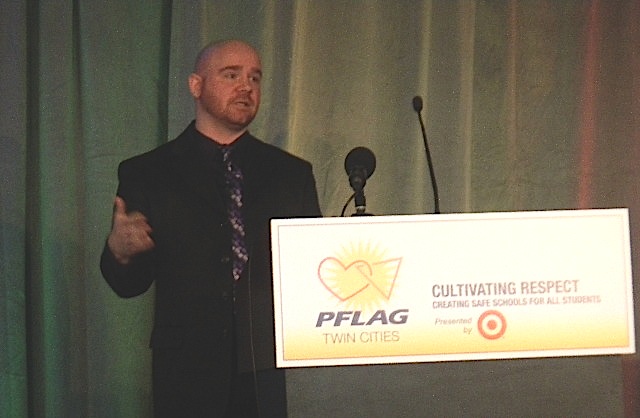 Nabozny, a Wisconsin native and the keynote speaker for PFLAG Twin Cities Cultivating Respect: Creating Safe Schools For All Students event, got into public speaking after he won a case against three of his middle and high school principals for failing to effectively deal with his many complaints of harassment and bullying for his sexual orientation.

The day-long event, held at Hamline University also featured a student panel, a resource fair, an evening dinner, and an awards ceremony honoring an outstanding parent, educator, organization, and student-led organization. The event and Nabozny’s speech focused on fostering a safe school environment for all students. PFLAG board member Carol Curoe said the event was meant to promote the health and well being of lesbian, gay, bisexual, and transgender (LGBT) students.

Prevention is the Key

Nabozny believes the students who have the power to stop bullying are neither the bully nor the victim of bullying, but rather those students who are bystanders.

“When bullying is addressed in schools we punish the bullies,” he said, “and we send everybody back to class and we hope everything works itself out, and it’s not working, We need a comprehensive approach to dealing with bullies.”

Nabozny told the crowd of students, educators, school administrators, members of the LGBT community and allies, that prevention should be a top priority. “We need to tell kids about the twenty-first century world we live in,” he said. “It’s not only an issue about LGBT issues, but also issues about other religions, difference race and ethnicities.”

Nabozny believes that when kids are taught diversity and empathy at a young age, they will have a better understanding of one another. He added that we cannot expect kids to go into school and respect each other when they see adults in society not doing that.

In order for this environment to change, Nabozny said that: state and federal legislation need to be in place to combat bullying, differences needed to be celebrated rather than feared, and laws need to stop what he called “the second class treatment of [LGBT] people in this country.”

In response to those who view anti-bullying policies for specific groups, such as gays and lesbians, as special rights, Nabozny said that his school had a policy that stated that nobody should be bullied or harassed, yet his claims were met with no help from school administrators, despite his various complaints about his treatment from other students.

Equal Rights Are Not Special Rights

Tammy Aaberg, recipient of the outstanding parent award during the events awards ceremony, shared similar views to those of Nabozny on the question of anti-bullying policies as special rights for a particular group. She said that when faced with someone claiming these to be special rights she asks them “What rights are gay people asking for that you don’t have?” She says she has yet to find anyone answer that question for her.

Aaberg has been an advocate for LGBT issues since the summer of 2010, shortly after her son Justin, a 15-year-old from the Anoka-Hennepin school district, committed suicide because he was bullied for being gay.

The Anoka-Hennepin school district came under fire from gay rights advocates, like Aaberg, due to its “neutrality” policy, which limits how teachers and administrators can address sexual orientation in school.

During the student panel, Anoka High School senior Lindsey Block, while talking about the neutrality policy, revealed her close relationship with Aaberg’s son, Justin, and described Justin’s suicide as “one of the hardest moments in [her] life.”

Aaberg started Justin’s Gift, a group focused on giving LGBT students, primarily in the northern suburbs, empowering programming and a “bully-free zone where they can achieve self confidence and be proud of who they are.” She said she won’t stop what she is doing because she “doesn’t want any more kids to feel like Justin did.”

Nabozny ended his speech Friday on a similar note, stating that “it’s time to recognize that it’s a basic human right to be safe in our school.”