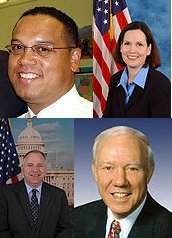 While Speaker of the House Nancy Pelosi appears to be backpedaling on President Obama’s State of the Union promise to repeal Don’t Ask, Don’t Tell “this year,” many of Minnesota’s Representatives say they support immediate action on a repeal.

Spokespersons for Reps. Betty McCollum, Keith Ellison, Jim Oberstar, and Tim Walz called for action on a repeal following Tuesday’s hearing in the Senate Armed Services Committee where Admiral Mike Mullen, Chairman of the Joint Chiefs of Staff, called ending DADT “the right thing to do,” and Defense Secretary Robert Gates announced the appointment of a year-long study group to decide how the military would respond to a repeal of the law mandating Don’t Ask, Don’t Tell.

Spokespeople for Walz and Oberstar were similarly plain-spoken in defending their bosses’ positions. Sara Severs, spokeswoman for Walz, pointed to Walz’s co-sponsorship for repeal legislation in the House of Representatives championed by Rep. Patrick Murphy (D-PA).

“I think that speaks for itself,” she said.

McCollum’s office, however, issued a statement calling on President Obama to order a moratorium on any discharge under DADT.

“As we saw in yesterday’s Senate Armed Services Committee hearing,” the statement read, “there will continue to be anti-gay segregationists in Congress but they will not succeed in denying brave gay and lesbian Americans the opportunity to serve their country with honor and respect.”

Conservatives have long championed the need to obey “the military’s opinion” on repealing DADT, but every one of Minnesota’s Republican members of Congress – Reps. Michele Bachmann, John Kline and Erik Paulsen – as well as conservative Democrat Colin Peterson, did not return repeated phone calls and emails requesting comment for this story.

As someone once said, “silence can speak volumes.”