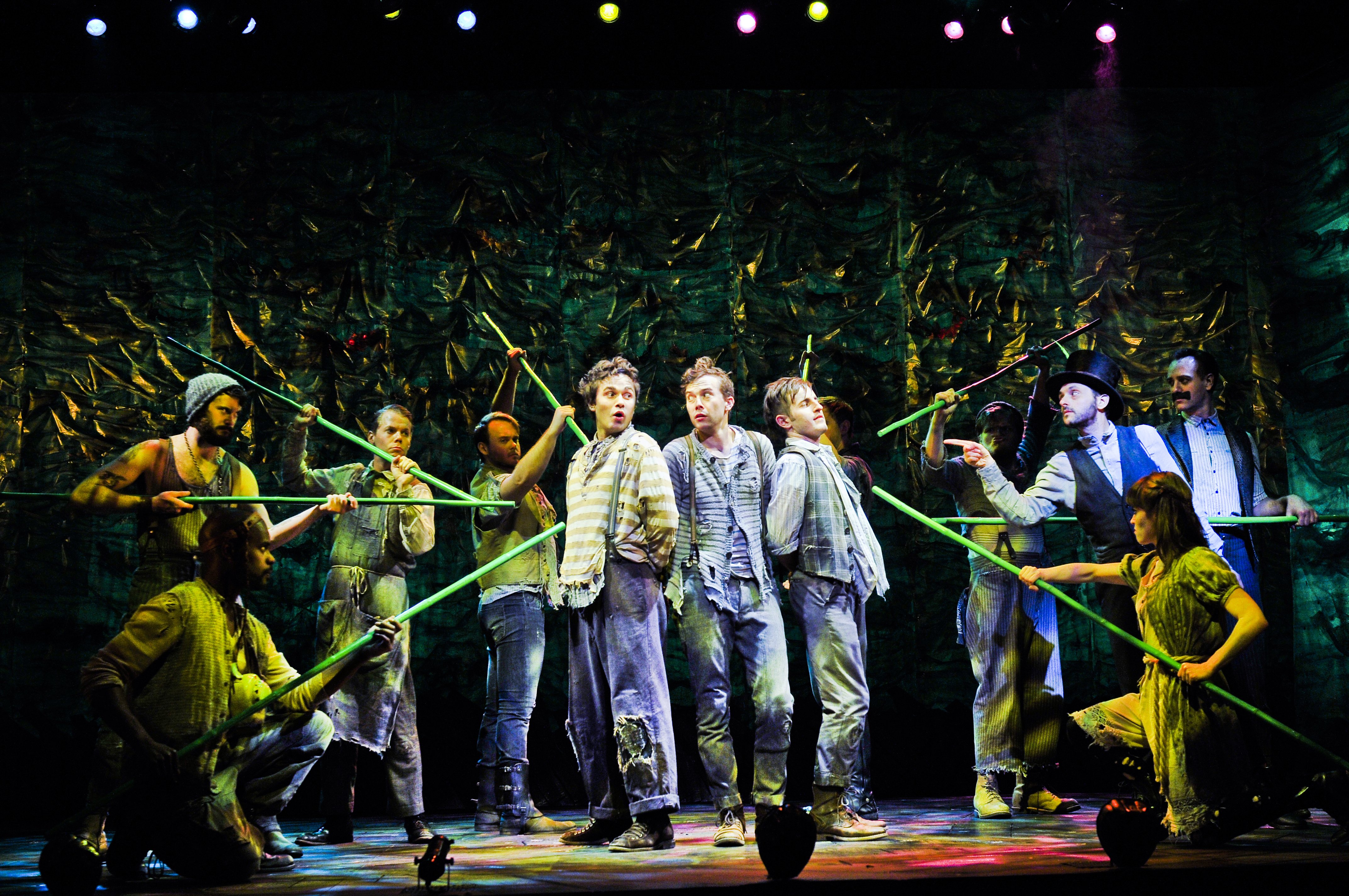 The Broadway tour of Peter and the Starcatcher opens at the Orpheum Theatre this Tuesday. The Daily Planet’s drama critic Basil Considine chatted  with Jimonn Cole over the telephone, who plays the leading villain Slank in this Tony Award-winning prequel to the classic Peter Pan story.

Am I catching you in Utica, NY right now?
Correct. We got here yesterday, we opened last night, and we’ll close here tonight.

And then it’s off to St. Louis?
Correct.

How did you first become engaged with the Peter and the Starcatcher tour?
I got the audition for the tour back in July, then went to a series of auditions. Most of us in the cast did; there were, I think, three or four rounds of callbacks. Some of them involved movement, some involved more scene work or singing, and ultimately I was seen by the entire creative team and had a good audition. It all went well, and I’ve been a part of the show ever since.

Had you seen the production in either its Off-Broadway incarnations or the Broadway run?
I did not see the show until after I was cast. I didn’t know if it was going to help me or hurt me in my audition process, but coincidentally it just didn’t time out that I was able to [see the show first] … but I guess things worked out as they did.

You really didn’t have any advance notice, then, that you might have a cat being tossed in your face?
[pause] That I might have a what in my face?

Can you confirm or deny whether any cats or you were harmed in the staging of this scene?
I can confirm that no cats or I were harmed.

What is your favorite part of Peter and the Starcatcher?
There are a few things that are pretty amazing. A big part of it is that it’s just a visually beautiful play. I grew up in the theater, [and] I love everything about the theatre, especially stagecraft. Just the concept of a bare stage [and] what can sprout from a bare stage … This play …just the colors, the simple shapes and things that I can see from inside – it’s just electric, visually. You feel kind of like a live piece of animation.

I have this scene – it’s a really great scene – called “Boxing” where I get into a boxing ring with another of the main characters. It just comes out of nowhere, from the bare stage – and then instantly the cast and the lights and the sound all create this boxing ring, with minimal props. Then, just as quickly, it’s gone – it disappears. It’s amazing to be at the center of that, of that boxing ring, and to look out all around.

What are some of the challenges of the role that you’re playing?
It’s a tremendously physical show. As has been said, if we do it right you [the audience] don’t even realize how complex the show is – and that is very much like being in a circus troupe or, I imagine Cirque du Soleil or something – because we work as a tight unit. The core cast are all supporting each other physically over the whole stage for these two hours. That’s a heavier demand than I’ve had in other shows.

I think I’ve actually noted that this is the most physically intense show that I’ve ever been a part of.

In the tour that you’re in right now, do they retain the original doublecasting where you have your heyday as a villain at the start, then come back as another character later?
Correct.

What’s it like making that transition? You’re a very central, plot-moving character at the start, and then you’re one of the Mollusks.
Right – [but] I’m Prince Mollusk, actually – “Hawking Clam.” I love that, actually. Because Slank is so very different, I love the opportunity to come back and for people to see me drastically different, and in a very simple way. Hawking Clam [my character] doesn’t say a lot, and I love being afforded the opportunity to go simple. Slank is a much more intense character.

Going back to the physicality of the show, it [playing Hawking Clam] is a little bit easier on the breath. Technically speaking Slank’s lines is very physically intense – it’s very much diaphragm and it also happens with a lot of movement and sound effects happening underneath, and you have to be able to support that…being heard and understood over those elements as well.

It also gives you some more time to take in the visually beautiful parts of the production that you mentioned.
Absolutely.

Tell us why people should come out and see Peter and the Starcatcher.

I think people going out to the theatre are going for some degree of entertainment and enjoyment. This play is definitely entertaining, but besides the entertaining it’s a really fun evening of innovative storytelling… I think adults can appreciate a lot of the language and the storytelling, but the kids can enjoy it as well because of those visuals and the theatricality. You have something that the whole family can come out to see together.

What’s up next for you? After the Peter and the Starcatcher tour comes to a close, do you have something lined up?

Right now, I do not. We [the cast] are all pretty much in the midst of wrapping our heads around that, because, as I’ve mentioned, we’ve been doing this since last July. We’re together six days out of the week – and a lot of times it’s seven days a week, because we travel on some of those off days. It’s been a pretty intense experience.

It’s a first for me. I have been on tour before and I’ve done an extended run of a play – I did it in rep, one play for such an extended time. I knew it was going to be an intense experience in that regard, and it has been one. It teaches you [things] in the same way that you hear about stand-up comedians saying “I did it on the road; I got my chops on the road.” Those are the same types of things that you learn by doing a play on the road. You have to learn to fine-tune and adjust your skillsets based on region, based on venue, based on climate, based on all kind of things.

When you come back to New York, back to the West Coast, you end up with more things in your tool belt that I’m looking forward to applying.

When you have freedom or free time again, are there any dream roles that you’d like to play, or dream roles that you’ve played so far?
I have played dream roles. I got to play Walter Lee in A Raisin in the Sun – Crossroad Theatre in New Jersey. That was definitely a monumental kind of experience for me, but my background is mostly in classical or straight plays – Shakespeare, August Wilson, and that kind of thing. I look forward to doing another Shakespeare play.

Honestly, as physical as this show [Peter and the Starcatcher] is, we joke around all the time that I look forward to some scene where we’re [just] sitting down, passing things around… [laughs] I look forward to those moments, too.

I imagine that you’re also looking forward to the post-Minneapolis tour dates in California, too.
Definitely. The West Coast is great. The tour’s been great, but obviously, with the weather and all …

And by the time that you get back to Boston, say, it’ll practically be summer.
Yes.

I noticed that you’d done a production at the Old Globe Theater in San Diego. You mentioned earlier that you’re based out of New York, and have been for a long time. How did you end up making the trek out to America’s Finest City?
It is a beautiful city. If there were more work opportunities out there…I’ve said to numerous people that I could live in San Diego. Really beautiful.

Say that again for the Tourist Office…
[laughs] I auditioned [for the show] in New York… Sometimes you have an audition that just feels right, and it did – right from the beginning with the director (Jonathan Munby) there along with the playwright (Jonathan Caren). There are only three characters in the play, and all three of us actors ended up being Julliard graduates – and the playwright was also from Julliard, so it ended up being a nice kind of experience to do that. It was a great experience out there, and I hoped – and still hope – that something might come from the play, because it was a great play. I thought it was really well received, too.

Did you know any of those other Julliard alums before you auditioned for the play?
I did not. I’m a little older than they are, so we had not crossed paths before.

How did you first get into acting – what drew you into the field?
I went to a performing arts high school starting in the 9th grade. From 9th grade to 12th grade, I went to the Virginia Governor’s School for the Arts. For those four years, I went to a regular high school for half a day, then from about one o’clock to five I’d be at the Governor’s School. Then in the evenings, we’d be rehearsing. From about 1 PM to about eight at night, I’ve been studying theatre since the 9th grade. That was my first draw; the training that I got at the Governor’s School was in many ways comparable to the training that I got at Julliard. I was introduced to some incredible training and technique and history and approach. A lot of it gave me a foundation in my later years of turning, and I always give so much credit to this day to that program for everything that it taught me.

Attached to the school was the Virginia Stage Company – literally: the buildings were attached. Sometimes, when we were in class, we’d walk the hallways or the stairways, and you could peek into the theatre and see a rehearsal or something. I will never forget [how] one day I was walking up the back stairway and there was an actor in costume… I hope I don’t get choked up, because it has always meant so much to me… [So there was] this actor in costume with his script (because they were in tech), and they were rehearsing Athol Fugard’s The Road to Mecca, which was the first professional production that I ever saw. He [the actor] was walking backstage, and it was the first time that I’d ever seen an actor offstage [and] in costume. It was as if this character from the TV world stepped off-screen, and all he did was walk past me. He had no idea that I was looking up at him; this actor has no idea that he touched my life like this, but it was transcendent for me. It essentially showed me that character is a person off-stage and you as a person go onstage, and it resonated with me. I carry that with me today.

Are there any prominent mentor figures that you’d like to mention?
Michael Tick, who is currently the Dean of Theatre Arts at the University of Kentucky. He ran that theatre program at that performing arts high school. If Mike Tick hadn’t accepted me into that performing arts program, I don’t know that I’d be sitting on the phone with you right now. And also Michael Khan, who ran the Julliard Drama Division while I was there – he was very inspirational. Those two Michaels.