In today’s challenging economic climate, keeping a small business alive is no small feat. But for Korad Abdi, known as “Sadia,” founder and CEO of Sadia’s Gourmet Sauces, it is barely a bump on the bumpy road of her life. Rather, it is the prize for years of persistence, patience and prayers. It is, she said, “my dream come true.” 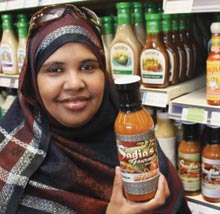 Abdi, who left her native Somalia while still a teenager in 1991, has weathered problems much greater than those that plague a start-up business in a troubled economy. She has overcome war; separation from her family; the premature death of her father; the threat of rape; mental and physical abuse; and life in a refugee camp.

Not only has she survived, she has triumphed.

Today, the 42-year-old mother of nine owns a successful business that sells its spicy sauce in 86 locations, including local farmers markets, grocery stores and online.

Using her grandmother’s recipe, Abdi created the hot sauce of all-natural peppers, tomatoes and more, plus her “secret” ingredients of tamarind and dates, which provide health benefits, she says. The sauce can be used in soups, dips and dressing, or with sandwiches, eggs, rice or pasta.

Although the public recognition and financial rewards are sweet, it’s the philanthropic aspect of her work that most excites Abdi. The business donates 10 percent of its proceeds to the American Refugee Committee’s humanitarian efforts in Somalia.

“I have good business now and God has given me so much,” Abdi said. “I want to share my blessings and give to others. I want to help people who suffer, especially the children.”

Suffering is a concept Abdi knows intimately. Her road from Mogadishu to Minneapolis was marked with peril.

When she was 19, her mother insisted that she leave her home in Mogadishu, the capital of Somalia. At the time, the country in the Horn of Africa, which separates the Gulf of Aden from the Indian Ocean, was embroiled in a civil war. Rival clans had toppled dictator Mohammed Siad Barre’s government and Mogadishu was overrun with marauding warlords.

Rather than have her daughter be subjected to the threat of rape, Abdi’s mother arranged for her to steal away in the night with a few trusted neighbors.

Terrified, Abdi recalled that she “had never been away from my home. But my mother was afraid for me. She said, ‘Honey, I will pray for you-nobody will touch you.’ ” Her mother fasted and prayed for seven days and Abdi arrived safely in Beled Hawo, a town bordering Ethiopia and Kenya.

A year later, Abdi set off again, this time making her way to Utanga, a refugee camp just north of Mombasa, Kenya. There she would spend the next eight years. In this dirt-poor and malaria-infested squalor, she would marry, give birth to six children-one of whom was lost in childbirth-and dream about her new life in America.

“I know in my heart that I was going there,” she said. “I never lost hope.”

In spite of evidence to the contrary-Abdi had been refused permission to emigrate several times-she did not give up. She wrote letters to the U.S. Embassy in Nairobi, Kenya, two times a month, every month, for three years. Discouraged but not defeated, she continued to write and to trust in God. She recalled how she looked up at the full moon one unbearably sad and hot evening and saw a plane above and thought, “Soon, Lord, we will be on that plane.”

In the spring of 1999 she was suddenly-and inexplicably-granted an interview. That September she, with her husband and five children, finally boarded that plane bound for the United States.

Although Abdi has had her share of struggles, she is quick to point out the blessings. A devout Muslim, her mother instilled in her a strong faith and a belief in God’s goodness.

“Some bad things have happened, it’s true,” Abdi said. “But God has always been there for me. God has blessed me.”

First among those blessings is her family. “I have a very good husband and I have my children-they are kind kids. Smart and mostly good,” she laughed. “I am proud of them.”

Abdi counts her family’s health and well-being, good schools and doctors among God’s gifts. And she is very grateful for the opportunity to work and “to do something good, to support my family and to help people who are suffering.”

Sadia’s Gourmet Sauces was born of her own suffering. The inspiration came to her in the wake of the death of a second infant.

While reciting her prayers on a steaming August night in 2006, she asked God to lift her “from the darkness.” As she bowed and touched her forehead to her prayer mat, inspiration struck. “At that exact time I think, ‘I’ll cook!'” So excited was she that she rushed to an all-night market and returned home to begin cooking.

Although the idea to market her hot sauce came in a flash, Abdi had been preparing-in one way or another-all her life for this. From hawking vegetables on the streets of Mogadishu as a girl to foraging for food from garbage in Utanga as a young mother to cleaning nursing homes in Minneapolis as a new immigrant, Abdi forged ahead toward a brighter future.

Typically, however, Abdi refused to take credit for her success.

As she smiled and pointed upward, she said: “Alhamdulahlah [Thank God]! He remembers me.”