Dragons rest as they prepare to be played with by many excited children.

Several hundred attended this engaging event which aside from providing a series of performances and having interactive cultural activities including dragon mask and lantern making and fruit carving served as a fundraiser for needy Vietnamese orphans.

David Zander, Susan Lien and Phuoc Thi Minh Tran from the highly regarded storytelling group, Asian Tellers Alliance, opened the program performing a series of stories they entitled Moon Tales. According to event’s organizer, Asian Tellers Alliance was co-founded by Zander and Tran. They use expressive art with the vision of fostering bonding and improving communication between the generations through traditional Vietnamese and Asian folktales and sharing the rich artistic Asian cultures with the mainstream community. 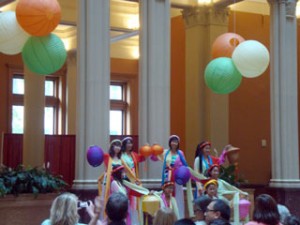 Ms. Tran pointed out that The Hoang Anh Dance Group has students from throughout the Twin Cities and for more than six years have been performing at numerous events and festivals promoting and preserving Vietnamese culture through song and dance.

Susan Lien followed with the song Moon River in Mandarin Chinese. This was the first time they have included a Chinese performance and it was very well-received. She is a multi-talented singer who is also part of the Asian Tellers Alliance.

The Tiring (Bamboo Xylophone), a traditional Vietnamese instrument was performed by Anh Ha Kieu Nguyen. She is a soloist, dancer, singer, and comedienne at Long An Province Arts Group, and has performed throughout the United States and Vietnam winning numerous awards.

The event wrapped up with a dance along with the Hoang Ahn Dance Group, closing with a Lion Dancers and Lantern Parade starting at the Landmark Center and weaving through Rice Park by the ever popular and best known Minnesota Dragon dance group, Hung Voung Association of MN. Tran noted that they work with and for youth in the Twin Cities to foster, maintain, and share Vietnamese culture with others and empower youth to become active citizens and future leaders through mentorship and meaningful activities and programs. 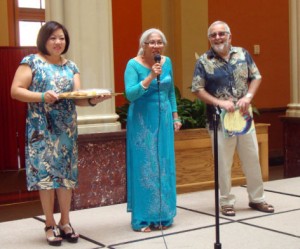 Various vendors sold everything from Vietnamese food and beverages, traditional Vietnamese costumes for children and there was even a booth selling lucky voodoo dolls. Several organizations such as, Think Small formally, Resources for Childcaring provided information on their services. Think Small connects parents to quality child care and provides training and resources to child care providers so they can provide high quality care for the children.

Event sponsors included Friends of the St. Paul Public Library, Vietnamese community of Minnesota, The University of Minnesota’s Circle of Giving and the Catalyst Foundation.

Phuoc Tran, event organizer, thanked the dozens of volunteers who helped out as this event expressing special gratitude to the Landmark Center for their willingness to host the event particularly Amy Mino, Kristin Smith and Jen Hernandez of the Landmark Center who ensured the event ran smoothly.