Rebecca Nagle is a Baltimore-based performance artist who specializes in challenging audiences: aesthetically, intellectually, emotionally, and sometimes even physically. Once, Nagle told Baltimore’s City Paper, a piece called for her to slap a female spectator—with the spectator’s consent—while the spectator and Nagle stood in adjacent boxes. “I was slapping this girl and she kind of was really out of it and was crying and wasn’t leaving the box—probably because she had just been smacked and she was in shock and so she just kept standing there. So I just kept slapping her.”

On January 22, Nagle will be at Bedlam Theatre for a single performance of her evening-long piece A Dozen Things I Want To Do On Stage. Nagle’s Web site lists the twelve things, which include undressing to “Wenn Ich Mir Was Wünschen Dürfte,” falling in love, enacting an audience member’s fantasy, answering questions while under the influence of a truth serum, and disembowling herself—the latter, symbolically. She needs to keep her bowels intact both for the national tour she’s embarking upon and, presumably, for a career in which she puts herself willingly at the mercy of people who ask her to do things like “take a dump but you must show it coming out.” (Did she? You’ll have to watch the video to find out.)

I spoke by phone with the 23-year-old provocateur, who grew up in Kansas, as she packed her bags at her Baltimore studio.

Why did you choose A Dozen Things to take on tour?
This is the first large-scale performance I’ve ever done. All the others were little acts in variety-show settings. This is my first big piece, and I knew it was something I wanted to tour with, to take on the road. Some of my other work is new-media stuff, so that’s already everywhere—it’s on the Internet—and then my community-based projects have been in Baltimore, so when I created this piece I made it with touring in mind.

How do you expect the experience of performing a piece like this on tour to be different than performing it in your adopted home town of Baltimore?
I’ve performed the piece in Baltimore, Philadelphia, and New York so far, and it’s different to perform it in front of people who don’t know me as opposed to people who do. Baltimore is a small town, so when I perform it here it’s all my friends in the audience. It’s definitely different when people don’t know you. The performance is really interactive—a good chunk is audience participation—so the dynamic of the room, the level of familiarity, really affects the piece. Philadelphia felt comfortable, like Baltimore, but New York felt really different. It’s interesting, so I’m excited to take it on the road and experiment.

A central element in your work is doing what spectators ask you to do. You’ve taken some extreme actions—even throwing up—at audience members’ request. Is there anywhere you draw the line?
Yeah. I draw the line in the structure of how I make the work. On the Web site for Fifteen Minutes [a project in which Nagle fields requests for actions to document herself, on video, performing over the course of 15 minutes], there’s a list of restrictions. The action has to last 15 minutes, it can’t cost me more than ten dollars, and it can’t harm nonconsenting parties. So I define my barriers and go into it with that understanding. A part of [A Dozen Things] is very much like that, where I pass out these forms for people to write their fantasies on. That has limitiations: for example, I can only use the props I have available.

Those sound like logistic limitations, rather than emotional or personal limitations.
I’m not willing to hurt other people. Beyond that, I’m not willing to do just anything for people. For the Fifteen Minutes project, someone requested that I film myself taking a nice relaxing bath—which is übercreepy. So the video is just bathwater running for the first five minutes, then I get into the tub fully dressed and stare at the camera. That’s me negotiating with the [spectator]. My goal is to make people think about who has power and who has agency.

You cite Erving Goffman, the microsociologist who wrote about social interactions and argued that every interaction is negotiated, that we’re always playing characters on a stage.
Yes, and what I’m doing is making that negotiation transparent. I’m also interested in Foucault: the idea that power in society is more complicated and nuanced than some people being in control of others. I make power structures that are really transparent. People can take that power negotiation that I make transparent and obvious and apply it to other situations where it’s less obvious.

You reveal a lot of things about yourself. Do you think there’s anything that it’s impossible, or very difficult, to reveal about yourself even if you try as hard as you can?
I’m pretty transparent, but there are things that I don’t want people to know. The most intense part of [A Dozen Things] is the part where I take truth serum, because I don’t know if someone will ask me a question I don’t want to answer. 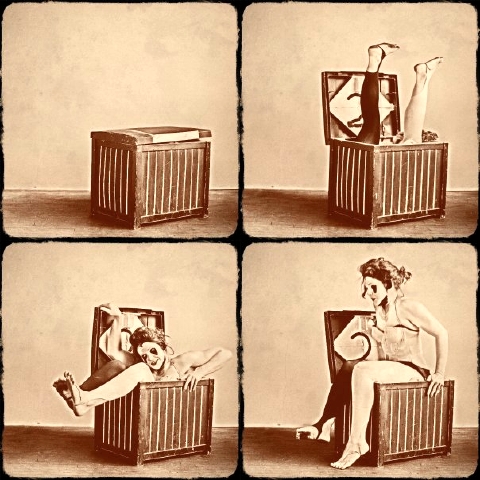 But are there some things you can’t reveal, even if you sincerely try? For example, your Body Site, where you hosted an RSS feed of news about your body, reveals the impossibility of completely revealing yourself. No one can even type quickly enough to do that.
There’s this construct we have where we imagine a distinction between a public self and a private self—what I have hidden deep down inside, my real true self. I screw with that concept in the performance, because I play different characters and I’m all of those different characters. You might say that when I’m reading my fantasies that’s getting more at my personal self than when I’m an MC speaking only in limericks, but I’m trying to break down that hierarchy of realness that we create, the idea that there are moments that are “real.” Does that make sense?

Yes. I write about theater, and I’ve often had the sense that when you run into actors in the lobby as “themselves,” that’s not necessarily any more “real” than when they’re on stage playing characters.
Even in the part of [A Dozen Things] where I read my personal fantasies out loud from a diary—that’s only a selected few of my fantasies. When I was making the diary I couldn’t even write down everything I was thinking of, and when I perform the piece I’m choosing from among the fantasies I did write down.

You’ve mentioned Yoko Ono’s Cut Piece [1965; Ono invited audience members to cut her clothes away as she sat still] as an influence. Has performance art come anywhere since then, or is it just the same stuff 40 years later?
That’s something I’m real curious about. I don’t know. There was this heyday of performance art in the 60s and 70s when there were all these gutsy things going on, and then it dropped off. I don’t think there’s an environment for a Cut Piece any more, because those concepts have already been expressed. I’ve noticed that a lot of artists who were doing performance pieces at that time are now doing video work or architecture instead. I don’t know why. I do think that the first articulation of something is going to be different than any later revisiting, so even the same kind of work will always be different over time. Those really intense feminist statements about power—for example, undressing a woman in public—have already been made, but they’re still relevant.

What are your next projects?
The next thing I want to do is to make plays for an audience of one—say, an hourlong performance that’s more like an exchange. Really get into the performer-audience relationship in a more intimate, intense way. Also, every year for the past three years I’ve organized a block party that brings together people from segregated neighborhoods in Baltimore—it’s kind of provincial here in that people tend to have their neighborhoods and stay in them—and the next step with that is to create a nonprofit to address broader community issues.

I just attended a performance by Rimini Protokoll that basically consisted of an hourlong one-on-one phone conversation in a private office.
That’s really smart [of Rimini Protokoll]. I’m interested in that kind of intimate interaction happening in an impersonal context. People make these requests that come from very complicated desires…

Or very simple desires.
Or very simple desires. In Actions to Relate I stood in a box with 60 cards listing physical interactions that can happen between two people. People would come up and choose a card, and then I’d do whatever the card said. I’d be hugging people, kissing people, doing actions which normally are very emotional but there were very impersonal.

Now I’ll turn the tables on you and ask you to choose the last question I ask you.
Hmm. To figure out what question I want you to ask, I should think about what answer I want to give. I like to explain the structure and aesthetic of the piece; why don’t you ask me about that.

Tell me about the structure and the aesthetic of A Dozen Things I Want to Do On Stage.
Okay! The MC is a character who speaks only in limerick. I did a lot of research on cabarets in the Weimar Republic in the 1920s, and A Dozen Things has the structure of a cabaret. All the props and costume elements are black and white; it’s a very specific old-timey aesthetic. The really heavy intellectual stuff in my work—Foucault and everything—is not always accessible, so I try to use familiar structures. I say we’re going to have a variety show, and people can be comfortable with that and still get those really heavy, intense concepts. With Fifteen Minutes, people could think, okay, I’ve been on YouTube, I know what to do here. There’s this facade of familiarity. Also, it makes the show really fun. There’s contortion, gimmicks…all sorts of funny stuff.