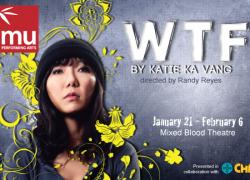 WTF is an expletive slang abbreviation made popular with texting. The term exemplifies the frustration that Vang says is at the heart of the story.

“Being a performance artist and a poet you begin to name stuff and make metaphors around it,” she said. “At the same time we are using texting technology to express things in the play.” 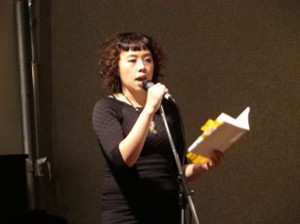 Vang said this is a contemporary perspective of the Hmong fairy tale tradition. It is her representation of story based on observation and experiences. She said it is a fictional story with generalizations on both youth and elders as exhibited through the mind of one Hmong American woman.

“I am biased,” said Vang, emphasizing that the work is art and meant to inspire discussion in the pursuit of a more reflective life. “I hope that the audience realizes that this is just one perspective.”

As an underground spoken word artist, Vang said the “pimping of the culture” comes without even knowing it. She doesn’t add motif without reason and said there were long discussions over suggestion to add cultural elements to the story.

“It is told in a terrific way through the perspective of a young Hmong American artist,” said Reyes, adding that as a Filipino American raised in Los Angeles and New York, the play opened his eyes to a community and a culture he wasn’t familiar with until he moved to Minnesota.

“I had to learn this just as if I was not Asian at all,” said Reyes, noting that common APIA threads are with degrees of assimilation, learning a new language and a sensitivity of how one’s culture is perceived by others.

The story began with a little inspiration from “Life and Debt”, a song by a Seattle-based hip-hop group, The Blue Scholars. The line in the song goes: “Take a deep breath, baby, let’s rearrange the mess we’ve inherited.”

Vang began to pool together her feelings about youth and maturing, about family and culture, addiction, careers and marriage. She began to write in her monologue voice but said the complex and overlapping topics were voiced more completely through composite characters.

“It is about how to rearrange something that is there but is not working; but also understanding what our parents raised us with, and then deconstructing that without losing what I want to use for a different blue print,” said Vang.

The theme contains issues of polygamy and opium use in the elder generation that is presented with the emotional repercussions and choices of the younger characters. She said it is less a direct social statement than of how its subtle pervasiveness impacts lives.

“I am not trying to dissect it but want to show that it still exists in peoples’ lives,” she added. “The best way to portray it is with regular people.”

Vang submitted the play for a reading in the New Eyes Festival last year and with so many talented playwrights she was surprised to be named for the nurturing program made possible by a Jerome Foundation grant.

Reyes said a strength of the story is its glimpse at the quiet way the Hmong American family unit functions in terms of sharing feelings – but being able to express something without always having to say it.  He contrasted this with a “verbose and open” family unit in Filipino culture.

He said it is significant that non-Hmong don’t always see a difference, visually, between other ethnic Asians – calling this a common APIA experience.

“It’s about the new generation of Hmong Americans; the younger generation who are born here and who are now trying to find their way in the world – and being caught between the American culture and their traditional Hmong culture,” said Reyes.

The issues of the American Hmong family and of how the younger generation deals with them is quite unique, he added.

Reyes said the audience would identify with themes of love and family, coming of age and responsibilities. Not all sides are represented in the story and he felt it was important to “spark” the questions and a desire for insight” at some level rather than presenting it as knowledge or representing culture.

“The didactic is not art – its record keeping,” he said. “If you want that then read the historical books. When your doing theater you do it as an art form. It is not there to answer all the questions but to spark the conversation.”

The author of a chapbook and several performance art collaborations and solo-works, Vang said she is comfortable writing aesthetic monologues and prose for herself, but has to work a writing a story using dialogue for actors.

She stayed true to her story by keeping her characters “raw and honest.” She also welcomed actor feedback to give the actors the “accurate portrayal” they wanted.

Reyes said the language stems from Vang’s background in spoken word and poetry. It has a rhythm that is not verbose and the silence has a language all of its own.

Vang scoffs at descriptions of her work as “revolutionary” or “groundbreaking.” She is proud of her work but says these are all stories that have been told before and is perhaps just bringing a fresh, contemporary perspective.

“This is only way I know how to write,” she said. “For them its experimental and it works. Its street theater-style and spoken word style theater, and everything comes from performance art.”

The story is set in the Twin Cities and in Whitewater, Wisconsin. The characters are composites of people that Vang said has shaped her perceptions on issues and generalizations.

Sun Mee Chomet (show-met), portrays True, a 23 year-old woman who has lived a difficult life. She is smart and but her own upbringing being raised by three mothers is contributing to her own situation.

“That’s just the way she is,” said Vang. “She just wants to be a very simple girl – rough around the edges, centered and down to earth.”

Chomet, a Detroit native and Korean American who earned an M.F.A. from New York University’s Tisch School of the Arts, once played Liang May Seen, the first Chinese woman-Minnesotan, in Jeany Park’s History Theater production of “100 Men’s Wife”. She also performed in the 2009 Guthrie production of “The Intelligent Homosexual’s Guide to Capitalism and Socialism with a Key to the Scriptures.”

The settings are minimal: a skyline and a street corner, a living room and an office. The scenery is designed to enhance expression and not to recreate the culture.

The colors of the paj ntaub are expressed through lighting, and Hmong hip hop culture is captured through sound and projections.

“It an abstract expression of the soul or the mind of the character,” said Reyes.

In addition to writing and spoken word performing Vang worked part time at Center for Hmong Arts & Talent, where she taught youth dancers and mentored young artists. Vang is now working on “Hmong Bollywood”, an autobiographical performance art piece about addiction and family history, using Bollywood as an aesthetic.

WTF contains adult content and cursing. It is recommended for adults and teens above the age of thirteen. For more information visit Mu Performing Arts online at www.muperformingarts.org. Mixed Blood Theater (www.mixedblood.com) is located at 1501 South 4th Street, Minneapolis, MN 55454.