Teressa Parker, who teaches first grade in the Centennial School District, stood outside the Senate chambers to support education. "Next year I'm going to have 29 kids in my class," she said, making it difficult to give the youngsters the personal attention they need.

Faced with devastating cuts to education and health care in the final days of the legislative session, Minnesotans filled the Capitol rotunda Saturday to call for a responsible budget that preserves vital services and creates jobs. An estimated 1,000 participants told lawmakers to increase taxes on the richest two percent of Minnesotans, producing a fair budget.

“I come from a part of the state that knows that that when we invest in our workers, our schools, our health programs, and our environment, everyone benefits. And that everyone should pay their fair share for those benefits,” said farmer Terry VanDerPol, a cattle producer from Granite Falls and a member of the Land Stewardship Project.

Speakers at the People’s Rally for a Fair Minnesota asserted that the state has sufficient wealth to maintain a high quality of life, as long as the Legislature chooses to fairly tax the richest two percent of Minnesotans — including some CEOs and executives who have put profits ahead of health care and decent jobs for Minnesota families.

“There is no budget deficit. The only deficit in our state right now is the deficit of imagination and the deficit of moral clarity,” said the Rev. Grant Stevenson, a Lutheran pastor and president of ISAIAH.

Citing banking executives as an example of those who should pay their fair share, Kerry Felder of Minnesota Neighborhoods Organizing for Change shared the story of tough times and foreclosures that hit her neighborhood hard, and her neighbors’ determination not to allow their local public high school to close. “I don’t need anything free. I just need a break like the one we, the taxpayers, gave the banks when we bailed them out,” said Felder.

“I am here fighting for an economy that works for my children, grandchildren, friends and coworkers. I know there is enough money in Minnesota to provide good jobs and decent health insurance to all the people who work hard,” said Tilly Gitchuway, a Minneapolis public schools food service worker.

Woodbury resident Anne Marie Metzger, of TakeAction Minnesota argued that it is time for the public to get back health care dollars from the insurance industry.

“Over time, HMOs receive more and more public plan customers and provide less health care and pocket the difference,” Metzger said. “That money, our taxpayer money, ends up in reserves. Together the top four HMOs in public health plans have $1.5 billion in reserves. Reserves, they claim they need for a rainy day. Well the rainy day is here, and we need that money, along with fair taxes for the richest 2% to pay for public healthcare and lower premiums. “

The demand for good jobs and responsible corporate behavior also extended to Cub Foods, whose cleaning workers have met with violent resistance and intimidation in their attempts to establish a code of conduct with the grocery chain. CTUL, Centro de Trabajadores Unides en Lucha, announced a hunger strike to oppose the abusive treatment of workers and invited rally participants to join them at the Cub Foods Lake Street store.

“We work every night surrounded by food, but all too often, cannot afford to put food on the table for our own families,” said Mario Colloly Torres, a Cub Foods cleaner who was fired after attempts to organize other workers.

Dean Nelson, a meat cutter at Cub Foods and a member of the United Food and Commercial Workers International Union, asked, “Why is it the little guy is supposed to sacrifice while the CEOs and stockholders of these companies make millions?” 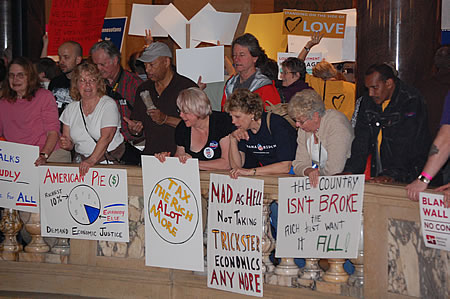 Participants leaned over the balcony in the rotunda to hear speakers demand a fair state budget.

After the rally, many of the participants boarded buses to protest CEOs and corporations who have made massive profits in recent years, but don’t pay their fair share of taxes under the current Minnesota tax system.

“It betrays the principles of fairness and compassion we Minnesotans hold dear to provide tax breaks to corporations and the rich at the expense of educating our children and keeping our communities healthy,” Trilby White, an acute care nurse and small business owner told the rally.