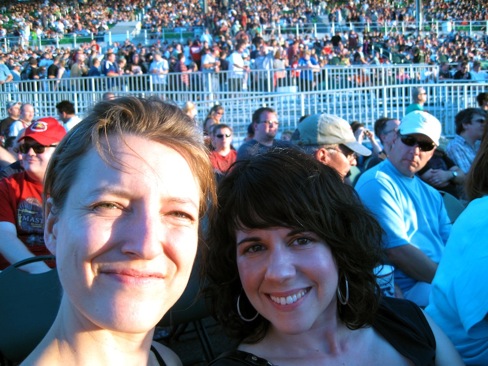 To be honest, I sort of hate the State Fair.  I don’t like crowds, I don’t like how expensive everything is, and I am not a fan of walking around amidst animal smells while sweating like a pig myself. So my theme this year was to make the whole experience as painless as possible.  There would be no obligatory stops- I would avoid going inside of buildings as much as possible and I would do my best not to get stressed, to remain cool, hydrated, and in a good mood.

The first step was to pick a good fair companion, which was easy.  I went with my friend Amy who had an extra ticket to see Rush at the grandstand.  Despite the fact that I’ve never listened to Rush outside of a karaoke performance two weeks ago, Amy decided to let me experience the magic with her, and I’m very glad she did.

The planning process involved deciding how to get there, bearing in mind the theme of making the experience pleasant.  Last year, I tried to do the park and ride thing at a lot very near the fair, which was a disaster because there were no spaces, so this year we decided to go the park and ride lot at Snelling and 94.  To increase our chances of not being annoyed further, we actually parked some blocks away from the lot in the neighborhood, so all we had to do was walk over and get on the bus.

Now, originally I had it in my head that I was going to interview a bunch of people on the bus on the way over there (and then on the way back) but it was so pleasant in the luxury bus with air conditioning and plush seats that I just didn’t feel like it.  Instead, Amy filled me in on why she thought Rush was such a great band and why it is so revered by progressive rock music nerds everywhere. 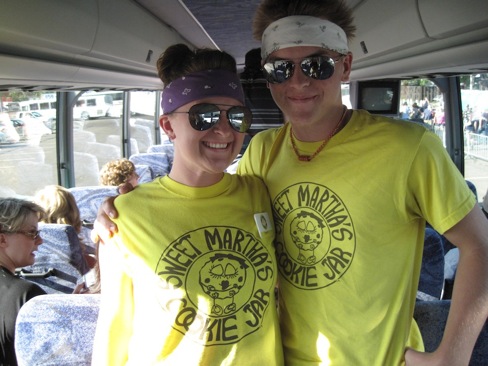 On the way out of the bus, I did take a picture of two cherubic looking blonde siblings, Christal and Joseph Bluhm, sporting who have worked at Sweet Martha’s Cookies for years, although Christal said she has known Martha long before working for her, as her mother is Martha’s cleaning lady.  She said she loves to people watch at the fair, and she loves the camaraderie of the people that work at the fair. 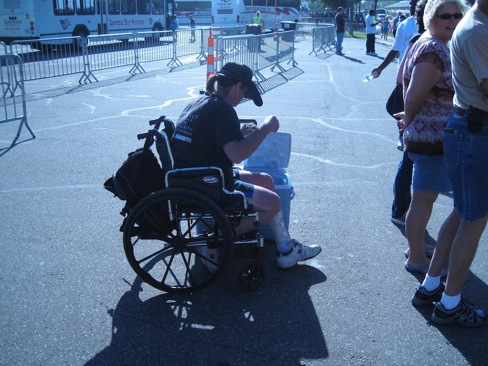 After the bus dropped us off, we passed three hardworking guys selling water bottles for a dollar each.  One of them was an older gentleman in a wheelchair.  He seemed too busy to be interviewed, so we went on across the street and into the fair.

There’s kind of an art to finding people who would be good interview subjects, especially at a place like the fair.  The best people are the ones that are standing still, but not eating or having a conversation.  In the best-case scenario, they make eye contact with you first.  Not long after we got through the gate I found three people standing by a fence who seemed like they might not mind me asking them some questions.  They were Herman Ikeme, Jamie Sabowsky and Kiebler Lamar Noel, who had travelled from Crystal, Minnesota.  They had just gotten to the fair and were excited to go on rides and eat French fries. 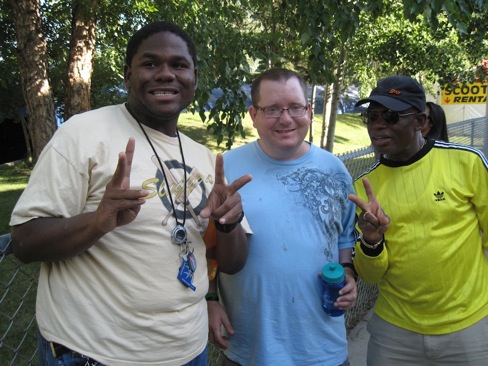 Those guys didn’t seem that interested in talking to me, although they were perfectly nice, and I started to realize that perhaps it was a bad idea not to have a pre-planned story in mind.  Perhaps the fair isn’t the greatest place to meet new people, because everyone is there doing their thing and not particularly looking to share their life story.

So I decided to go back to my goal of not being annoyed and just enjoying the fair.  The first order of business was to find something to eat.  Because the food is usually pretty expensive, we wanted to find the perfect thing that would hit the spot.  After approaching a few different stands and rejecting them,  I decided to buy corn on the cob, since I love the stuff.  I asked them to give me one not dipped in butter, which seemed to shock them. I noticed that there was a place to recycle your corncob, but by the time I was done eating it, we were not near there anymore so I just threw it in the trash.  I felt guilty about that for about two seconds.

Next, we went to get drinks. The dilemma of buying alcohol at the fair is that, while the beer is pleasant, the drunks near where you buy the beer are not.  I had the unfortunate experience of being pushed out of the way by a jerk, so  I pushed back and told him to watch it.   We made a quick escape, found no open tables, and then wandered outside behind the building where a bunch of employees were sitting and having a break. 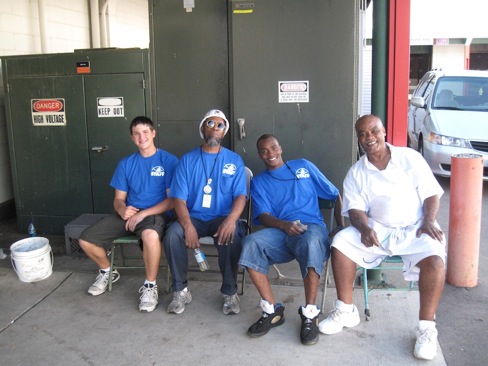 These guys were super nice and I interviewed them, beer in hand, and took their picture.  One of the gentlemen I met was Winston Caroll, from Oklahoma.  He works at a Cinnamon Roll booth, and also works at several fairs around the country, including in Tulsa and Kansas.  I asked him what the best part about working at the State Fair was and he said without a beat:  “The girls.”

Winston’s friend, Isaac Weathersby, who said he loved the fair because it showed just how small the world is, but at the same time that it’s not small at all.

It was awkward to write in my notebook with my beer in hand, so we bid those guys goodbye. We found a shady spot to sit on the grass, where Amy could eat her burrito and I could update my Twitter feed. I think that moment was my favorite of the whole day.  It was nice and cool in the shade, I was sitting with my friend, watching all the people wander by.

At the International Bazaar, oddly, the music group was singing Boogie Woogie Bugle Boy.  I wanted to try out the Camel on a Stick from Safari, but another Midtown Global Market vendor said that Safari wasn’t at the fair yet.  Disappointed, I ended up getting some organic free range lamb, which was delicious.

At about 7 p.m., we headed over to the grandstand to get our seats for Rush.  We paid for our $8.50 beers and found our excellent seats in the 24th row.

I ended up really enjoying the concert. Rush has great lyrics, tons of charisma, and they can really rock out.  Amy pointed out the number of fans air guitaring during the show, and I noticed a pervasive smell of marijuana.

During the intermission, a few guys started to hit on us, so I decided to interview them.

One of the guys said that he isn’t particularly a Rush fan, but that he spends $15 grand on music events every year.  His friend was more of a fan. “Rush is a musician’s band,” he said, “that doesn’t shy away from new material.”  The second guy also noted that the Grand Stand was where he saw his first concert- Kenny Loggins in 1984.

The first guy said he didn’t believe that I was a journalist and he started to be a jerk, so Amy yelled at him and we made our escape.

The rest of the concert was fantastic, and afterward we went to find more food.  At Falafel King, Amy got a gyro and I got a falafel sandwich, and then we sat and watched karaoke.  We were tired but it felt good to eat greasy food and watch some quite talented singers show off their stuff.

Stuffed, we made our way to the bus and then home and I decided that I was successful in having a not-sucky trip to the fair.