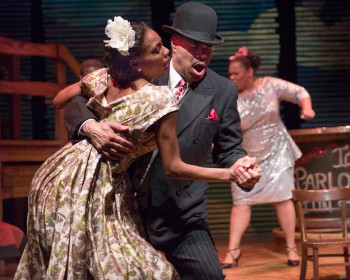 The saying that “the more things change the more they remain the same,” can be aptly applied to the Penumbra, which can always be expected to put on top-notch theater. Its production of SPUNK is consistent with what folks have come to expect.

Anyone familiar with theatre and entertainment in the Twin Cities would have recognized the names of Twin City stalwarts Jevetta Steele, Dennis W Spears, T. Mychael Rambo. They have carried many productions and they didn’t hurt their reputations in this one either. Steele’s voice just soared throughout and she played a sassy “other” woman in the production’s first act.

But this time it was the Penumbra fixture Austene Van who really shined. She absolutely stands out in every scene she’s in and even steals a few.

In the opening vignette “Sweat” she plays Delia, the poor battered wife of a country boy who can’t seem to find satisfaction in what he has at home. Van’s Delia conveys a quiet strength and she tucks away her natural dynamism to let you see a woman whose dreams have faded and her hopes for real love are all but perished. But Zora Neale Hurston (three of her short stories are adapted here by George C. Wolfe) rescues her with her tale of how sometimes fate intervenes to right wrongs. In this case, fate comes in the form of a snake. Keith Jamal Downing, who plays the wife beater and adulterer Sykes, may just have been too nice of a guy to play the part, or he may have been handicapped by his youth.

The middle tale “The Gilded Six Bits” had a bit of a moral to it as well. One could say it sought to say that “all that glitters isn’t gold.” Rambo played a convincing gold plated shyster who almost upset a happy home, but love prevailed. Van again stood out as she played a woman, not just any woman, but a Black woman who loved her man and wanted the absolute best for him. Downing was convincing as a man madly in love with his wife, so much so that he managed to overcome his wife’s temporary stumble from her marital vow. As the chorus sang repeatedly the refrain “the sun rose and the sun set,” we got the point, sometimes time does indeed heal wounds 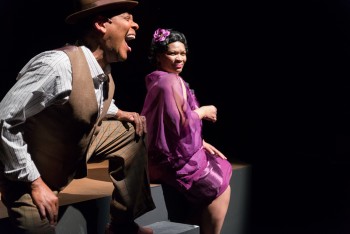 T. Mychael Rambo got a chance to not only display his well known acting chops but he was outfitted in the finest suits the 1920s and 1930s had to offer. He and Mikell Sapp got to strut around in zoot suits in Harlem as old school hustlers, Sweetback and Jelly would be pimps without a dime in their pockets in, “Story of Harlem Slang.” And they weren’t outfitted in just any ole zoot suits, but loud colored zoots at that: red pinstripe and mustard yellow. Van’s character Missy cracked that both of them, “rushed up here to get away from a job.”

Sapp really strutted his stuff while showing that he, as the old folks used to say, “is light on his feet.”

Speaking of old folks, the production was sprinkled with old school sayings from the Black experience in the 1920s and 1930s. I got a kick out of Van telling the pimped-out Rambo in the last scene that portrayed city hustlers doing their thing in New York, that “I wouldn’t give you air if you was stuffed in a jug” And one of them had laid an old school line on her earlier tell her that, “there must be recess in heaven cause one of the angels is missing.”

The sun shines and the sun sets and the Penumbra continues to put out first-rate productions. SPUNK doesn’t disappoint and has a little something for everyone: a little singing, a little dancing, great acting and good, old-school storytelling.