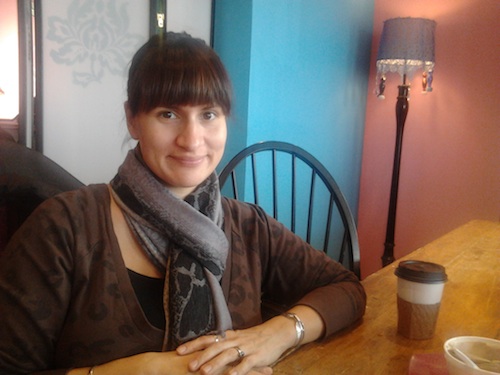 For 33-year-old Peggy Flanagan, health care policy is “super personal.” About a decade ago, Flanagan’s mom had to go on social security disability because her pain was so bad. With her fibromyalgia, she could no longer perform the tasks that she needed to do for her job. “That was really hard, because my mom really defined herself through her work,” Flanagan said. “That was her identity – someone who got up at the crack of dawn and worked late into the night. Just to not be able to have that has been really hard on her.”

Care for people. It’s a simple enough concept, but one that sometimes gets lost in all the rhetoric and politics during election season. What would happen if more of our elected officials and people in government thought about the value of caring for people? When it comes to health care reform, 33-year-old Peggy Flanagan wishes politicians would talk about what it means for real people, how Paul Ryan’s plan to turn Medicare into a voucher program people like her mom, a woman who worked her whole life healing others, and now can’t always even get the medication she needs.

Flanagan has worked for the Division of Indian Work, was a School Board Member with Minneapolis Public Schools, and is now the Director of External Affairs for Wellstone Action, where she’s taken a leave to work for Minnesota United for All Families. She’s also expecting a baby in February. And through all of this she’s cared for her mom, a woman who for the past 10 or so years has battled a host of health issues including fibromyalgia, severe osteoporosis and scoliosis, and now has issues with her breathing, because her spine is collapsing and crushing her ribs, making it more and more difficult for her to breathe, and making her essentially bed ridden.

Flanagan decided to vote for Barack Obama in 2008 after he told a story about watching his mom suffer in her last weeks and days of life and having to be on the phone with the insurance company arguing about whether or not they’d pay for her pain medication. “That was the story for me that made me go, “Okay. This guy gets it and will be an advocate for me and my family and specifically for my mom.”

Flanagan’s mom worked her entire life, essentially, in hospitals. She was at Midway Hospital and she finished her career working at Methodist in the Cancer Center as a phlebotomist.

“You never really realize that your parents have a life outside of you,” Flanagan said. “What was so powerful to me is we’d be out grocery shopping and she’d run into one of her patients, and they’d be like ‘Oh, Pat, how are you?’ and just sort of light up when they saw her.” Flanagan saw how her mom did make a difference in people’s lives. Thought she was primarily doing things like drawing blood and lab work, and putting IVs into people, she has a caretaker spirit. “She’s invested so much of herself- and I think sometimes when you’re in the work of healing other people, you sometimes take some of that illness onto yourself as well,” Flanagan said.

When Flanagan was in college, her mom made the decision to leave Flanagan’s stepdad, who was an alcoholic and a batterer. After a long and messy divorce, Flanagan’s stepdad was ordered to pay spousal support. Over the course of their relationship, he had cashed in on two of her mother’s pensions. Since then, he’s lived all over the country, and there aren’t dollars at the county level to track him down. “There’s barely enough dollars to track down fathers and parents who don’t pay child support,” Flanagan said.

Since that time, her mom’s health has deteriorated, and they haven’t seen the step dad, though they’ve heard rumors that he shows up in town every once in a while. “What’s so hard is that once my mom made the decision to get safe, she didn’t have anything.” Because over the course of their relationship she had become completely financially dependent on him, when she finally had to stop working, there was no choice but to move in with her daughter.

“I grew up for a long time when it was just me and my mom until she got married, and she did the best that she could with me and taking care of me. You care for those you care for you- that’s a value I have and that I was raised with and frankly if there were more people who thought that who were either elected officials or in government, I think we’d be in a much better place,” Flanagan said.

When her mom moved in with her, it was really tough. They did it for about five years, and the medical bills just became too much with trying to maintain a house, and they ended up losing their home in foreclosure. “We just had to make a choice if we were going to support her and get her what she needed, and put every dime into a house, it just didn’t make sense for us,” Flanagan said.

Fortunately, Flanagan’s Auntie and Uncle were able to purchase a condominium, where her mother now lives, paying them a modest rent. For two years, Flanagan’s Auntie cared for her mother every day, with Flanagan coming over twice a week. Then, last April, her uncle died, so now Flanagan and her husband have taken up the duty of visiting her mother daily after work. Her mom’s currently on a waiting list to get someone to care for her 7 hours a week. “We’re in that process of getting that support for her, but it’s taken a long time, and my fear is that — my mom has Medicare and Medicaid — if we go to some type of voucher program, I have no idea what that means for us. Already every month we pay for groceries, and some bills, and with expecting a baby in February, it’s just a little overwhelming to think about how to make that all work,” Flanagan said.

Flanagan considers herself blessed that she and her Auntie and husband have been able to step in and be caretakers for her mom, but she wonders what happens to people who don’t have that kind of family support. As an organizer who has worked in politics, Flanagan knows how to navigate the system, but that’s not true for everyone. She thinks about those “who are holding their breath for election day to see what happens and see whether they’re going to be able to have kids, or pay for their medications, or pay for all these choices. So for me, that’s what this whole election is all about. Is my mom going to be able to get the care that she needs?” Flanagan said.

When Obamacare passed, it allowed Flanagan and her mom to breathe a sigh of relief. “It doesn’t impact her pain from day to day, but it gives her confidence that her coverage will continue, that there’s a leader who is looking out for her and for our family.”

That’s not to say that Flanagan doesn’t see room for improvement in our current system. She sees doctors that have a sense of urgency, trying to get through as many patients as possible, and who often don’t take the time to listen to her mother about what her challenges are. She’s also experienced having to jump through hoops, and think about spend downs, and that her mom can’t get this test this month, because there isn’t enough money here, so they have to wait, instead just being able to get the care that her mom needs. “I think that’s something that I’d like to change, that people just get the care that they need, because that’s what they need, and they don’t have to make choices between do I do this or do I not do this? Should we just cross our fingers and just wait and hope that this is going to turn out to be okay? Can I go without this medication for the next three weeks because it won’t be covered again next month?”

“It’s super personal,” Flanagan said. “The bottom line is that a woman who made a decision to keep herself safe, and to take her life back is now being punished by the same system that she invested in almost all of her professional life. It’s really a tragedy. Unfortunately I think that’s the current story of our health care system in this country.”