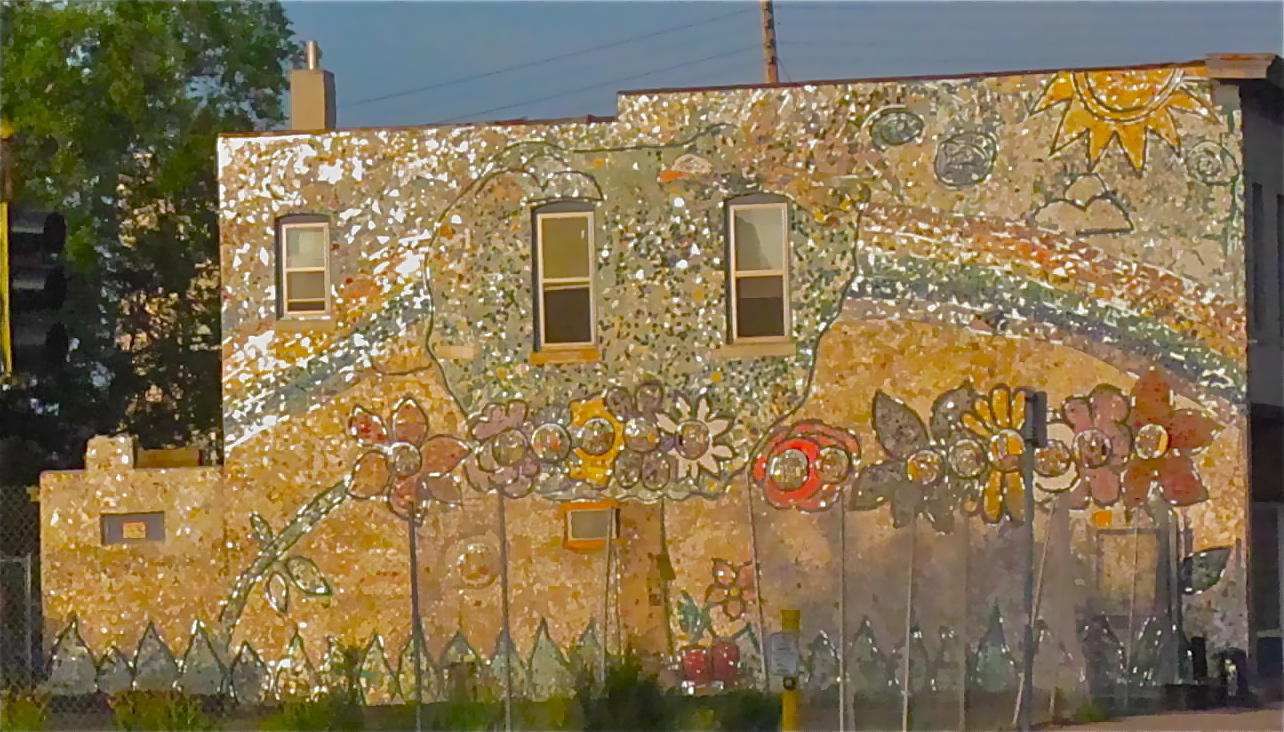 The future does not look good for the Peace House Mural, created by artist Angela Carlson Talle for the Peace House, a place where anyone can come in to visit, meditate, and find “a place to belong”. The organization will soon be moving, exchanging their building, which they own, for a new building that nonprofit developer AEON will be giving them a block away. The Peace House building will be razed and a new apartment complex will be erected.

The current two-story Peace House building was built in 1905. It is located at 510 E. Franklin Avenue, between Portland and 4th Avenue, west of an empty lot. Both the empty lot and the Peace House site are part of the South Quarter redevelopment project by Aeon and Hope Community, which encompasses all four corners of the Franklin and Portland intersection. AEON and Hope Community have plans for a $30 million development for that northwest corner, including 120 market-rate and affordable apartments, according to an article in Finance and Commerce. The article also states AEON is currently seeking tax credit allocations for the project, in addition to receiving city and county funding as well as an $800,000 Livable Communities grant from the Metropolitan Council.

When the new development is completed, Peace House will move from its current building, which will be demolished, to another building that AEON will exchange for their current one in a quid quo pro transaction. “We’ll give them our keys as soon as they give us our keys,” said Ward Brennan, Co-Director of the Peace House.

How the Mural Came About

Angela Carlson Talle returned to the Twin Cities after studying  with famed mosaic artist Isaiah Zagar in Philadelphia, where she worked on a number of public art projects during her apprenticeship. As she was driving by the Peace House building, she thought to herself that the building really needed some love.

Talle approached the people of Peace House, and asked whether, if she raised to money to do it, she could have the west-facing wall of the building to build a mosaic mural.

Peace House agreed to let her build the mural. Talle raised the money from family and friends, and got tile donations from the Minneapolis Glass Company and the Tile Shop. She said there was some talk at the time about a possibility of a new development, but she didn’t give much thought to it.

The Peace House developed the main themes for the tile mural. They wanted it to contain the words “A Place to Belong” and include a memorial to Peace House founder, Sister Rose Tillemans, as well as things that make them happy, like a rainbow, a garden, an eagle, and red boots. Talle took the ideas and created the mural with the help of friends, family and community members.

Talle also created the mural on the outside of the building where the Muddy Waters coffee shop was located before it closed recently. She also created a mural inside the coffee shop, but it was torn down about a month ago when the new owner, Urban Bean, decided they preferred a clean white wall, Talle said.

Talle also created a mural in Saint Paul at the Lao Market on University Avenue. When ownership changed to Bangkok Thai Supermarket, she made repairs to that mural.

She currently has plans for another mural in Saint Paul, for which she has received funding from the Minnesota State Arts Board.  She’ll be doing a western-themed mural on the side of the Turf Club.

About a week ago, Talle received an email from Catherine Mamer, Director of the Peace House, which was sent to a large number of friends of Peace House, inquiring whether anyone would want to take on the project of photographing the mural, as it was to be torn down. Talle later spoke with Mamer, who confirmed that the building and mural were to be destroyed.

“It’s pretty sad,” Talle said.  “I’ve tried not to get hung up on impermanence of things.  It does make me sad, when I think about how much love and energy goes into it.” 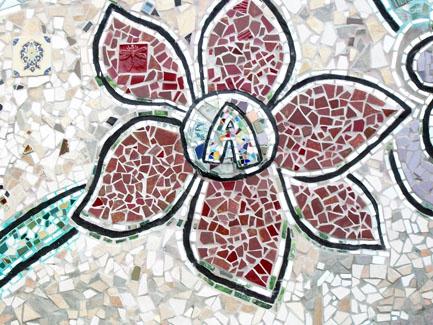 What to do with an Orphan Mural

When Madeleine Douglass, an advocate for historical buildings, learned that the mural was in danger, she started to reach out to different community partners to see what could be done.

She contacted Dan Walsh, Senior Project Manager for AEON, who said the mural could not be saved because it is extremely difficult to relocate a mosaic. She also spoke to Mamer, who said the organization has been trying to find a new home for the mural, without any success yet.

Ward Brennan, Co-Director of the Peace house, said in talks with architects, they have been told that there is no way to move the mural. He said they are hoping to photograph it and frame the picture to take to their new building.  There also might be a possibility of salvaging some of the pieces of the mural and displaying them in their new location.

However, Douglass is not convinced that no solution exists. “AEON is capable of either moving Peace House to another location or preserving and moving the wall with the Peace House mural to a new location,” she said in an email.  After all, she said, AEON moved an entire building 50 feet to the east in 2010 as part of their development at 727 E 17th Street in Elliot Park.

Douglass hopes that there might be a possibility to have the mural moved to a new location.  So far, she has not found any organization that is willing to take on the expense.

Bob Albee, from Ventura Villages, had the idea that at least parts of the mural could be moved to the ugly sound barrier at the 35W entrance, but he then learned that MnDOT has plans to remove that soon.  “Which leaves us in a pickle,” he said.

In talks with neighbors, Albee has found that Talle’s mural has “endeared itself to a lot of people.” At the same time, he recognizes the expense of moving a mural of that size.

If it comes to having to destroy it because of lack of money, Albee said, at least there should be some kind of ceremony to grieve its loss.

Still, Douglass hasn’t given up yet.  And Albee said that perhaps there are organizations or community members that can think creatively about what to be done about the work of art.