The Minnesota Department of Transportation estimates that by 2035, over 1 billion tons of freight, valued at over $1 trillion, will move through Minnesota each year (see p. 3-8). 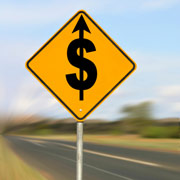 These goods will move in one of three ways: truck, train, or boat. The continued health of Minnesota’s highway, rail, and inland waterway infrastructure is vital to the state’s long-term economic prosperity. Unfortunately, long-term revenue projections fall short of projected need.
This article explains funding mechanisms for highway, rail, and waterway infrastructure in Minnesota, and highlights the budgetary demands each will face in coming decades.

The Department of Transportation estimates that $30 billion in revenue will be needed to cover highway construction and upkeep over the next twenty years. Without new sources of revenue, only $18 billion in funding will be available, leaving a $12 billion funding gap. This marks a difference from the 2009 projections, which anticipated nearly $65 billion in needs, with a $50 billion shortfall. MnDOT has since scaled back the need for new highway construction, relying instead on fixing and maximizing existing transportation resources.

These projections don’t include property and other local revenue sources to cover the significant construction and up-keep for county and city roads the state doesn’t fund.

On the local level, county governments and Regional Railroad Authorities allocate funding through general funds and tax levies. State investment is allocated through the general fund and through the bonding bill. For federal investment, railroad projects must generally compete for grants from a limited number of government funds.

The Department of Transportation estimates that between $2.2 and $4.4 billion (p. 7-12 and 7-13) in freight rail infrastructure spending will be needed between the present and 2030, 26% of which will need to come from public investment. Private sector spending, which has been consistent at a rate of $100 million per year, will likely have to increase as well.

Minnesota has 260 miles of inland waterways that serve as a critical mode of transportation for many Minnesotan industries, especially grain farming and iron mining. The federal government funds the upkeep of these passages, with the state providing infrastructure support at the ports. The U.S Army Corps of Engineers develops, operates, and maintains the waterways (e.g., navigation channels, harbors, locks, and dams), and regulates the channel depths through dredging and water management. Funding for construction and major rehabilitation projects is shared on a 50/50 basis between the federal government and commercial users (via a $.20 tax on barge fuel supporting The Inland Waterways Trust Fund). Operation and maintenance costs are supported wholly by the federal government.

Minnesota’s five local port authorities (Minneapolis, St. Paul, Savage, Red Wing, and Winona) are responsible for building and maintaining the facilities where the barges load and unload. The State provides assistance through the Port Development Assistance Program, which allocates funds to Minnesota’s five port authorities to help them improve efficiency at their waterway freight terminals.

The Department of Transportation estimates that $65 million dollars is needed to complete necessary future project. However, in the last decade the state has invested in less than a tenth of that in port construction.

These are all worthwhile investments that help drive businesses in our state, and serve as just one more example of how the public sector works to move products and help create jobs.