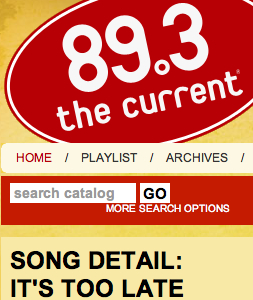 Fans of Minnesota Public Radio’s The Current – including even toddlers at the station’s Rock the Cradle events – helped convince a state appeals court that the deal that created the station in 2004 should stand despite a legal challenge.

Opponents “waited too long to assert a claim to set aside the sale,” the court ruled (pdf) Tuesday.

A group called SaveWCAL opposed St. Olaf College’s 2004 sale of WCAL-FM to MPR from the start. The group’s contention that the sale was void under state charitable-trust laws led to a lawsuit filed in 2008.

That was within the six-year statute of limitations. But the appeals court found that reversing the deal now would harm “innocent parties” – the kiddies at The Current’s family events included.

Such potential harm to innocents creates an exception to the statute of limitations, the court said, rendering SaveWCAL’s suit too late.

In its opinion the court didn’t rule on the merits of SaveWCAL’s claims but only on whether the suit itself was tardy.

In recounting the dispute, the court included facts that appear to support SaveWCAL’s arguments, such as that MPR and St. Olaf were “co-conspirators in the breach of a charitable trust” and that the sale broke faith with decades of donations by listener-members of WCAL. From the court decision:

St. Olaf solicited donations based on its representation that charitable gifts would “help guarantee the future of Classical 89.3 for generations to come.”

Too bad, ruled the appeals court, citing this legal precedent: “Poverty alone is not a legally cognizable excuse for failure to initiate suit.”

MPR NewsQ carried an Associated Press story about the ruling as well as a New Cut blog post, where a commenter offered this assessment: “I guess you can unpack now.”

Will the appellants take their case to the state Supreme Court?

“The SaveWCAL board will now need to determine our next steps,” the organization says at its website.