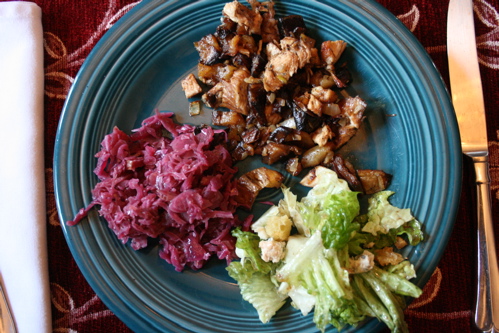 When you’ve been unemployed for who even remembers how long, you get into a certain daily pattern, which can involve long hours posting intransigent comments on Facebook and plenty of time to wander around the grocery store. Then, when part-time employment rears its ugly head, you suddenly have to do things you don’t particularly feel like doing, such as work. I believe that the pros and cons of this situation are self-evident.

Bruce, in his first paying job (except for those weird Malaysia gigs) since the Great Fire-the-Old-Guys Recession, now finds himself staring nightly into the refrigerator wondering what he can whip up out of a few questionable ingredients. Tonight’s masterpiece: Leftover Hash-i.e., hash made of leftovers-which Bruce claims is an American classic. He combined elements of a repulsive, ancient, factory-farmed “turkey tenderloin,” roast potato slices he made for a dinner party last month, fried onions, and sage. Was it good? Yes, it was. The side dish was sweet-and-sour red cabbage he made a long, long time ago-but, amazingly, that stuff never goes bad, like pickles. The salad was made of the pieces of lettuce that hadn’t stuck themselves to the bottom of the vegetable compartment.

This is not to say that Bruce hasn’t been making interesting dinners in the past couple months, despite his newly inconvenient schedule. He made an awesome tomato sauce for spaghetti, cooked for a really long time so the flavors melded. He made gumbo about a million times to prepare for a gumbo-making competition, in which he won second prize, despite the fact that, or because of the fact that, his gumbo tasted kind of like chicken pot pie. Sometimes he gets pierogies from Trader Joe’s for a reliable dinner substitute. Once he made the worst gnocchi in the world, which we should have known were going to be bad, because the package was labeled “gnocchis” and the “gnocchis” were made in Chisholm, MN.

In case you, too, find yourself in the situation of trying to pass off antediluvian leftovers as a freshly made dinner, here’s a tip. See that leftover loaf of bread in the back of the fridge? If it doesn’t have green or blue things on it, you can make it into croutons. Bruce says to do this as follows: cut the bread, no matter how stale, into cubes. Heat olive oil in a little frying pan. Toss the bread cubes around in it and put some garlic powder on them. After they cool off, throw them into the salad with some blue cheese (which is always good because you can’t tell if it’s moldy or not). The salad will be delicious, and you will be forgiven for not having gone grocery shopping after your unfamiliarly grueling day at work.