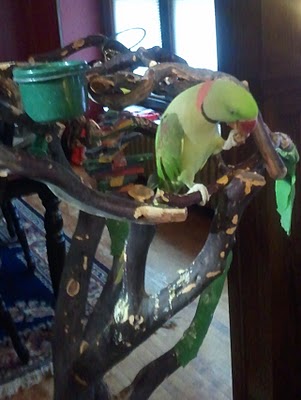 Last week, Pappy’s opened up on Broadway, and I decided to check out Hawthorne’s newest business over the weekend.  Twice, just to be thorough.  As I approached, the first thing I noticed was that at least they spelled “Italian beef” correctly.  Unfortunately, they didn’t run spell check or proofread their menu. 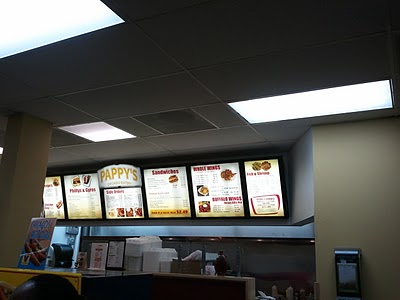 It’s not exactly legible in the photo, but you can apparently get “Buffolo” chicken tenders, and your panini can be “tosted.” 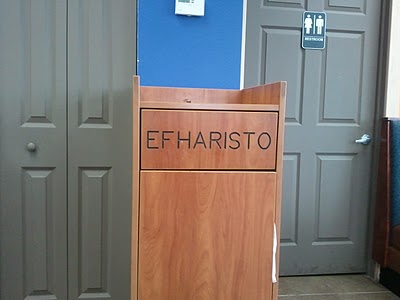 But when their trash bins say “Thank you” in Greek, maybe we should cut them some slack.

Maybe I’m being a little too critical, so let’s get to the most impressive accomplishment Pappy’s can boast about…

…which is their use of interior space at the site.  Unlike the vast expanse of Rachel’s, which is unnecessarily wasted on a center bar island, Pappy’s made efficient use of their building.  They took the incredibly cramped building and somehow made it feel welcoming and comfortable.  A lot of that has to do with the soft yellow on the walls, and some smart interior decorating.  But the layout of the tables does a nice job of allowing takeout orders and encouraging people to sit down and eat.  They even ask if you want to get your food “for here or to go.”  And that’s how you know you’re in a top-tier establishment, when you have that CHOICE.

Really, a few of the fried food shacks on Broadway just assume you want your food in a styrofoam container that you can conveniently litter on the street later, even if they do have seating. 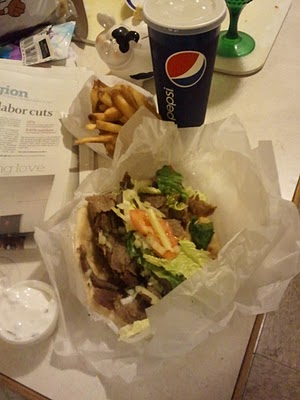 Let’s be honest though; you’re not going to be eating at Pappy’s for the fine dining experience.  You’ll be looking for fried foods that do all the right things to your taste buds while assaulting your arteries.  On those grounds Pappy’s delivers as promised.  My first trip there, I picked up the gyro and some fries.

The gyro here is on par with what can be found at Olympic Cafe.  If I built the perfect West Broadway gyro, I’d take the pita, lettuce, and meat from Pappy’s, and the tomatoes, onions, and sauce from Olympic.  (The discarded ingredients from each respective place could maybe be given to some destitute group in need of even the slightest uplifting gesture, like orphans or the Minnesota Timberwolves.)  Pappy’s gyro is quite tasty though and definitely worth it.  Their french fries, unfortunately, are nothing special at all.  There’s just no taste to them.  I’d advise getting a sandwich and avoiding the empty calories of the fries and soda that come with the meal combos.  In fact, on my next trip I was counting calories and only got the six-inch Philly cheesesteak instead of the footlong. 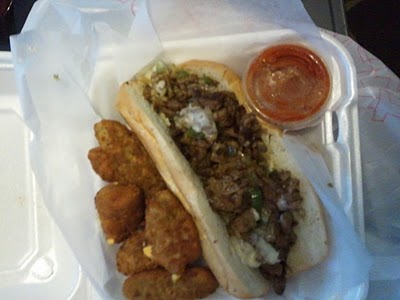 According to the Weight Watchers point system, I should be able to eat again by…ok, let’s see here…Thursday.

This might be the best NoMi Philly outside of Papa’s Pizza.  I took this over to the Irving Inquisition’s house to eat while we watched a “Lost” marathon.  (He won’t admit that in comparison with “Battlestar Galactica,” “Lost” is simply the best show ever, so I will torture him with the aroma of deliciously unhealthy food.)  As soon as I walked in the door, I was met with loud and continuous squawking – not from I.I. this time.  One of I.I.’s parrots, Estelle, had figured out the exact screeching pitch that convinced me to give him (Estelle is a he) some slices of the steak sandwich.

At least he moved this fast only when the meat was out of my hand. 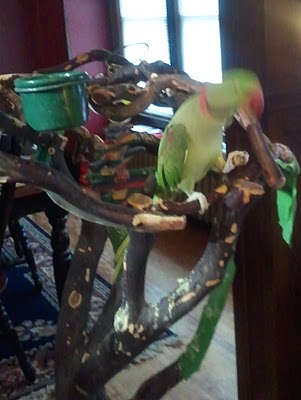 Estelle chowed down faster than I did, and I wound up making several attempts at appeasing his appetite.

The final item I tried was their jalapeno poppers.  As glorious as the Philly was, these things were just terrible.  The jalapenos and the cheese filling were okay, but the batter was both tasteless and way too salty.  I can’t recommend the jalapeno poppers here.

Pappy’s makes great use of their space, and I am always excited when a place I think should be torn down is instead turned into something positive in Hawthorne.  I wish we had an addition to West Broadway besides yet another fried food shack, but there’s not a whole lot else that can be done with the building here.  Their Philly is amazing, the space is welcoming, and their service is friendly and quick.  Pappy’s is worth checking out.