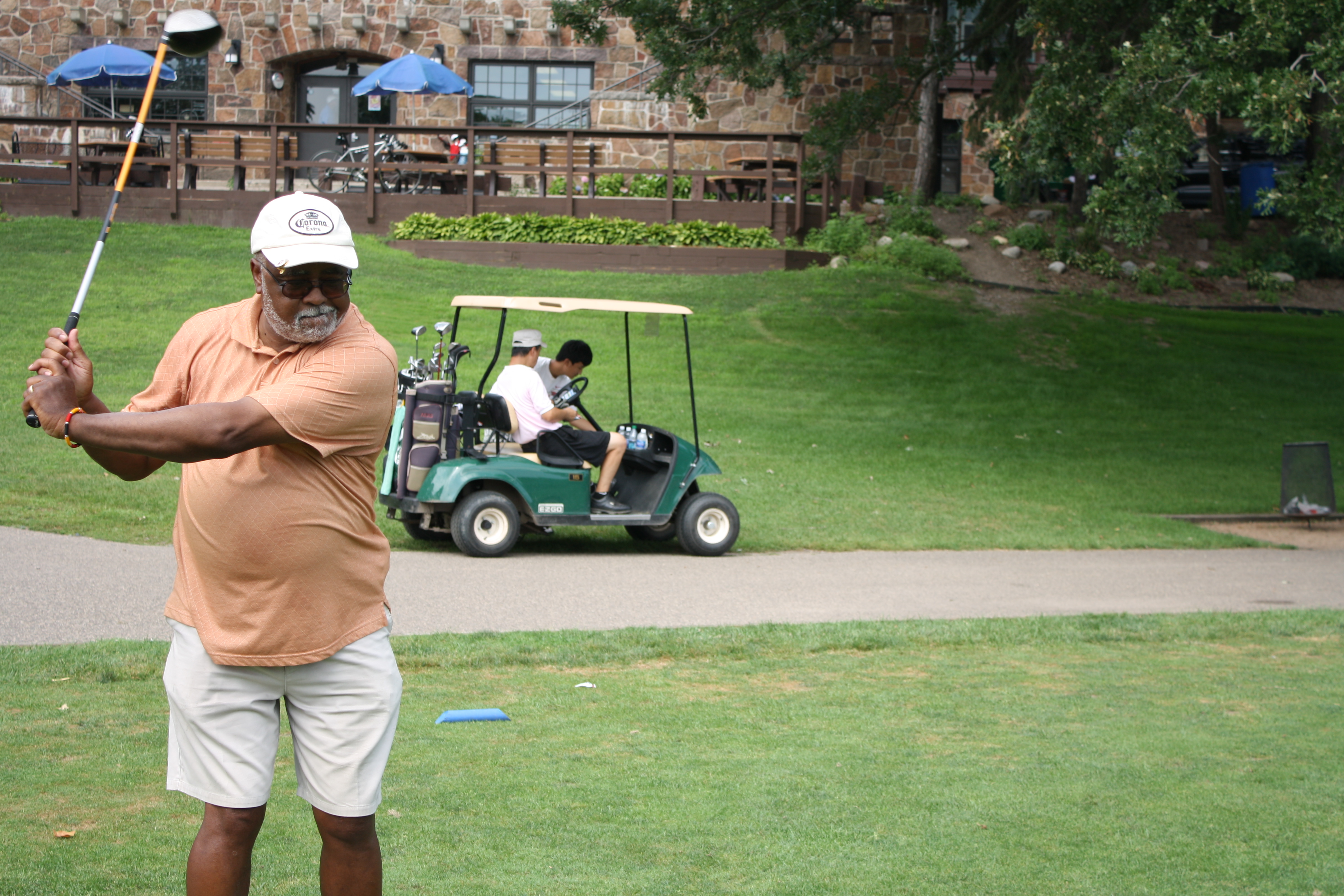 On July 19, as a result of community concerns over a possible elimination of the Theodore Wirth Par 3 golf course, approximately 100 people gathered at Minneapolis Park and Recreation Board (MPRB) administrative offices for the Citizen’s Advisory Committee (CAC) meeting. Many came to protest the proposal.

“I wanted a chance to speak briefly on behalf of some golfers who you will not hear from tonight,” said a 13-year Par 3 employee. “You will not hear from Richard, a middle-aged Black fellow with Parkinson’s who kind of wobbles up the course and feels comfortable to play at the Par 3. And that is probably the only place where he’s going to feel comfortable playing.”

Walter “Q-Bear” Banks of KMOJ-FM radio was at the meeting and challenged anyone in support of eliminating the Par 3 to a game of golf. “When I was little, in the wintertime [I remember] going up and down Theodore Wirth Park and sliding down the hill on the tubes… I still do it, because that is the park that I go to that I feel comfortable with, that I can bring my family and friends [to] and have a great time,” said Banks

Gayle Anderson, a St. Paul resident who did not attend the meeting, often golfs at the Wirth Park Par 3. He was unaware that a discussion regarding the Par 3’s future was taking place.

“The Par 3 is pretty much historic in nature,” Anderson said. “A lot of Minneapolis youngsters started out their golf careers on that Par 3. It’s always been accommodating to young Black men and women that are starting out playing golf.”

Anderson says that on any given Sunday you are likely to see Black golfers socializing at Wirth Park. “It’s a great meeting place for Minneapolis citizens.”

Jennifer Ringold is the manager of public engagement and citywide planning for the park board. As such, she works to support the CAC, which focuses exclusively on Theodore Wirth Park. During an interview with the MSR, she explained that the board defines a particular goal for the CAC and appoints members.

This group began meeting to look at the park as a whole on December 14 after completing its work on the Wirth Beach in July of last year. They set a six-month time frame to complete the process of prioritizing improvements to the park and submitting recommendations to the MPRB for final approval.

During March 2011, a survey was created to capture public feedback on park usage. As the CAC looked at the different uses of the park, they were informed of a decline in rounds of golf played over the years while other activities were increasing, use of the trails being predominant.

City of Lakes Nordic Ski Foundation had been part of the North Wirth study group formed prior to the survey to make preliminary recommendations to the CAC.
According to a memorandum submitted to the CAC by the Nordic Ski Foundation, their dilemma was how to acquire the space to complete a project they envisioned that included a “silent sports center,” three miles of multi-use trails and parking. They proposed three options: replace the Par 3 holes six-nine, change it to a six-hole course and move the sixth hole, or “add a different golf feature or remove the Par 3 altogether.”

However, when the golfing community became aware that the Par 3 was in jeopardy, in part because of the low support of golf reported in the survey, they took action in the aftermath of the tornado that struck the park and surrounding community.

Robert Dwyer and many other golfers and golf supporters formed an organization called Friends of the Theodore Wirth Par 3 after the Nordic Ski Foundation made recommendations for the park that included “repurposing” the Par 3. He said that though he knew many Par 3 golfers, none of them confirmed being included in the survey process that evaluated what drew users to the park.

“Within two weeks of good weather at the Par 3, we collected over 300 signatures on our petition,” Dwyer of said to the CAC and attendees during the July 19 meeting. “I’ve handed in that petition today.”

“There are now more than 800 signatures on it,” Dwyer continued. “And the petition says two things; it says we are not about to give up the Par 3, and it also says that we would like the survey process to be reopened so a sufficient number of golfers can have their input into…that analysis.”

Prior to the CAC meeting, the group had initiated three focus groups in an attempt to educate the committee members about the importance of the Par 3 and golfing at Wirth Park.

Scott Wylie, a golfer speaking in support of Friends of Par 3, presented the CAC with documentation of the history of the park and information on income generated through golfing. The documents reported that between 2000-2009 the combined net income generated through the 18-hole and Par 3 was $1,369,000. Over the past five years the Par 3 generated $365,000, while winter activity operated at a net loss of $202,000.

“If the Par 3 were eliminated there would be an awfully large net income that would be lost and replaced by net loss,” Wylie contended.

Bruce Chamberlain, assistant superintendent for MPRB planning services, provided an overview of the process leading up to the recommendations. “Whoever is involved, whoever has been advocating for a future for this park, has to trust in the process… My understanding is that there has been maybe enough controversy around the Par 3 issue that that trust is waning, and we want to rebuild it.”

Chamberlain suggested a design charrette, a multi-day event engaging community members, a design team, park board staff and the CAC where all potential programs would be discussed. The goal would be to end the process with one or more alternative suggestions for the MPRB to consider.

But one committee member felt that the idea overlooked much of the work already done and extended the six-month time frame. “A lot of the stuff that you’re talking about here we’ve already been covering for two years,” said CAC member Carrie Juntunen. “To do a charrette for a project as big as all of Theodore Wirth Park is a little pie-in-the-sky dream that you can cover it all at once.”
Yet another CAC member was in support of the process. “I would like to come to a basic place where those of us at this table can look at what’s there without feeling the public pressure,” said member Vida Ditter. “So, I’m willing to try a little bit of something new, if it ends up — and I hope it will end up — in getting something concrete that we can pass on to the board.”

“As we started the project, we realized so much of the park didn’t have an updated plan,” Ringold told the MSR after the meeting. “And as we started delving into trying to update different sections to make sure that the recommended improvements are up-to-date and current, we realized that it’s essentially a master planning process, which takes quite a bit longer than six months.”

The last master plan for the park had been completed in 1980. Though plans don’t have expiration dates, they are revisited for current relevancy and revised when needed. In this case that master plan had lost relevancy on several points.

The July meeting concluded with the CAC accepting Chamberlain’s recommendation of the design charrette. Although this does not completely eliminate the possibility of repurposing the Par 3, public responses appear to have made that unlikely. Although no date has yet been set for the charrette process from which a final decision may arise, late October is the projected timeframe.
“A redesign wouldn’t be that bad,” said Anderson, “because it’s a very challenging Par 3 course… I’d have to know what the plans are for whether it’s good to alter it, [but] definitely not eliminate it.”

For information on the Citizens Advisory Committee, including meeting minutes, agendas and other documents, go to www.minneapolisparks.org/default.asp?PageID=33.