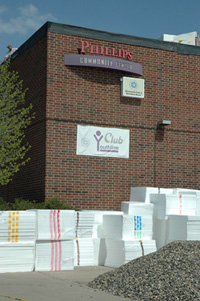 Nearly ten months after a plan to fill the Phillips Community Center pool with concrete sparked a community outcry, the Minneapolis Park and Recreation Board is set to approve a new future for the Phillips Community Center. The new plan envisions two sets of arrangements: the Phillips Coaliton of neighborhood organizations would begin leasing immediately, with a decision on the pool deferred while Minneapolis Swims develops a financial plan to renovate the pool, with an opening occurring within 36 months.

If the board passes the resolution on January 19, Park Board staff will work with Phillips Coalition partners, who submitted the proposal, to finalize the lease and program agreements and plan for renovations. Final approval would be voted by March 16, with renovations completed in 2011. The building could reopen by April or May.

If the proposal, which was approved by the Park Board’s planning committee a couple of weeks ago, passes, it will be a far cry from the controversy begun last March, when neighbors found out that the pool would be filled with cement.  After an outcry, the pool’s destruction was delayed a month and then six months.  During the reprieve, neighbors and community organizations in Phillips got together to put in a proposal for leasing and programming the building.  The structure of two separate leases for the pool and for the other programs was intentional on the part of the organizations putting the plan together, so that the non-pool programming could begin right away, according to Robert Albee, one of the main organizers.

If the proposal goes through, Phillips Community Center will include tenants Running Wolf Fitness Center, Freeport West Exercise and Nutrition Center, Waite House (including a kitchen and job center), Living Balance Wellness Center, Ventura Village Neighborhood office and conference room, A Partnership of Diabetics, Guri Nabad Center (integrating East African immigrants into the community), and – eventually – Minneapolis Swims, if it finds funding. The Park Board will also run a recreation room, kitchen and classroom space, according to an MPRB staff report.

Albee is hopeful the proposal will go through, but he said he’s maintaining some humility and not jumping up and down yet until the deal is finalized.  He said that the tenants and community members took it upon themselves not to present their proposal until they had the unity they needed.  The good communication and organizing the groups had with each other, he said, “eloquently pays off… Our hard work delivered this situation.”

Hanna Lieder, from Minneapolis Swims, said the organization officially formed in 2009, though they’d been teaching kids to swim for years.  She said it was really important for the Phillips neighborhood, which has the most kids and immigrants than any other neighborhood, to have a pool.  “Swimming is  a life skill,” she said, and there aren’t enough pools serving South Minneapolis.

“The only thing standing in our way is money,” Lieder said.  She estimated putting in a competitive pool would cost $625,000.