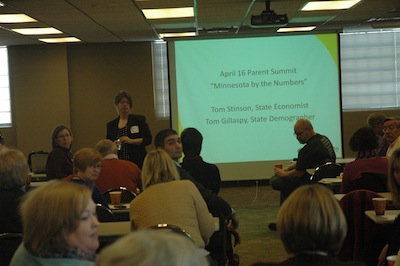 According to Craig Roen, President of the Board of Directors, PUPS started as a group of parents sitting around a kitchen table wondering why state money wasn’t going to public schools. Roen said PUPS aims to present “unbiased consumer information”, and in that regard, have declined contributions from teachers’ unions.

Among the issues that PUPS addressed were the state’s surplus (that actually isn’t a surplus), redistricting decisions expected February 21, the constitutional amendments Republicans have proposed (and how they will affect education), and the influence of the American Legislative Exchange Council (ALEC).

According to a PowerPoint presentation by PUPS Executive Director Mary Cecconi*, the state’s supposed surplus is actually made up of short-term fixes, such as school payment shifts. According to Cecconi, tax cuts and rebates passed in the late 1990s have led to a decline in state/local governement tax share of personal income. That, in combination with the basic formula for funding education not keeping up with inflation, has created shortfalls for schools.

Among other potential issues to watch, Cecconi cited proposals for mayoral takeover of schools, teacher evaluation, pay for performance, and teacher layoff based on performance. Cecconi spoke of the increasing blaming of teachers for problems in public schools. “If I make it about teachers, I don’t have to make it about funding,” she said.

PUPS is also paying attention to the ESEA (NCLB) waver decision, coming soon. If approved, the flexibility request would cause certain NCLB provisions to be waived in exchange for the state’s adherence to four principles: college and career-ready academic standards; state-developed system of differentiated recognition, accountability and support; supporting effective instruction and leadership; and reducing unnecessary administrative burdens, according to a handout provided at the conference.

PUPS has a bunch of upcoming workshops and events in the coming months, including a Caucus “Wonk-shop” on February 6, Brown Bag Updates (every Monday during the legislative session), Wednesdays at the Capital, the Annual Parent Leadership Summit on April 16 at 9 a.m. and more. Their website is also full of information and data for parents interested in researching funding and other policy issues related to public schools.

CORRECTION 1/30/2012 | Mary Cecconi is the executive director of Parents United for Public Schools.