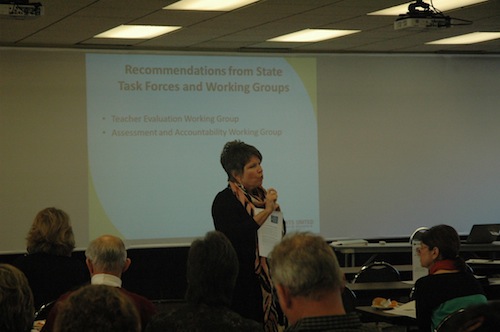 Testing, teacher evaluation and tenure, and school funding were among the top issues discussed at the Parents United for Public Schools annual legislative kick-off on January 5. About 75 parents, teachers, school board members, and people from other advocacy groups contributed to lively discussion after Parents United director Mary Cecconi’s PowerPoint presentation.

“Testing in general has become a huge deal,” Cecconi said. Teachers say that testing takes up more time than ever before, and also dollars. For example, the nation is shifting toward a “common core,” instead of aligning standards with tests that are already in place. That means there will be a whole new slew of tests, which means new study guides and books, according to Cecconi. These will be put out by private companies, which stand to make a lot of money.

Cecconi said that more money is spent on testing, because testing data is used more and more for teacher and school accountability, including allocation of funds to schools.

Use of test data in teacher evaluation is another controversial issue, along with a related push to eliminate or weaken teacher tenure protections.

All the players from the Minneapolis teachers contract fight were in attendance, including Lynn Nordgren, president of Minneapolis Federation of Teachers, and “education reform” advocates Lynnell Mickelsen from Put Kids First and representatives of MinnCAN.

Cecconi made the distinction that Minnesota doesn’t have a tenure system, where tenured teachers have a job no matter what, but rather a continuing contract, which gives teachers a right to due process.

“Tenure does not mean you have a job for life,” said Lynn Nordgren. “If you are not effective, or struggling, if you are not able or willing to change, you lose your job.”

Lynnell Mickelsen, from Put Kids First, challenged Nordgren, saying only one percent of teachers go through the process. Nordgren said that was incorrect, and Mickelsen shot back: “We’ve never gotten the right data.”

A big issue in the coming year, according to Cecconi, is going to be parent engagement.

Bonnie Cannon, President of Minnesota PTA, said that as classroom sizes grow, schools are looking for parents with real life experiences, especially with math and science backgrounds. She asked Cecconi whether any action was being taken to change legislation to allow more parent volunteers with relevant life experience to enter classrooms.

Cecconi responded that how districts utilize the talents of parents and volunteers from the community happens at the district and school level. A current Minnesota statute provides for parental involvement programs, but, said Cecconi, has not been fully implemented.

Parents United wants to push for furthering this legislation:  “Let’s push this, let’s get training on it. Let’s make it the default,” Cecconi said.

Bullying is another policy issue that lies ahead. Minnesota has one of the shortest bullying policies in the nation. Cecconi said there’s been pushback on legislation about bullying because of fears of litigation.

Other policy issues include early childhood education and integration, although Cecconi said that the Integration Aid Task Force was never asked to present last session.

Of course, you can’t really talk about policy without also talking about how the policy is going to be paid for.

This year, the state will be paying back the shift, which delayed payment of state funding for schools in order to balance the state’s budget. (See sidebar for explanation of “shift.”) Repayment can be a mixed blessing, because though it looks like schools are getting a bunch of money, it’s not actually new money, just the money they were supposed to have had in the first place.

According to Cecconi, the push now is whether school funding should continue to rely heavily on district-by-district voter-approved property tax levies. These often prove inequitable, because affluent suburban districts can raise enormous amounts of money compared to rural or higher poverty urban areas.  One thing that’s been suggested has been levy caps, which would try to balance out access, Cecconi said.

Cecconi concluded her talk by asking whether we have a failing system or a design problem. If the system is failing, she asked, who is designing the new one? While there is immense frustration over moving the achievement gap. At the same time, higher expectations, less money, lack of trust in government entities, and above all a divided advocacy community make changes difficult. “You’re either a reformer or defender of status quo,” Ceccone said. “It’s our job to blend the two. Can we honor what has been to transition to what must be?”

Cecconi went on to say that she believed the answer lies in partnerships with parents, about how to carve out a space at each school, where parents know what they are responsible for and what they can do.