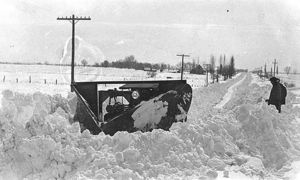 Aid to cities, counties and health and human services took the deepest cuts in Pawlenty’s proposal.

The governor, who is in his last year in office, pledged to protect programs for the military, veterans, public safety and money for K-12 classroom education.

According to the governor’s office, the budget proposal cuts $250 million from aids to local units of government; $347 million from health and human service programs; $47 million from higher education funding, and $181 million from state agencies and other programs. . . .

That cut to LGA should hurt out here in rural Minnesota. Bluestem received this statement from the Coalition of Greater Minnesota Cities:

STATEMENT FROM BRUCE AHLGREN, MAYOR OF CLOQUET AND SPOKESMAN FOR THE COALITION OF GREATER MN CITIES

“The governor’s proposal will be devastating to Minnesota communities. If this is passed, Minnesotans need to brace for deep reductions in snowplowing and pothole repair, fewer police and firefighters, closed libraries, closed parks and closed community swimming pools.

“This is a reckless proposal that doesn’t acknowledge the disrepair our state and communities are in, and will drive Minnesota into a deeper recession.

“Legislators from across the state and across the aisle need to stand up for their local communities and stop this proposal immediately.”

LGA helps keep local property taxes low, though some have suggested that if rural Minnesotans want services without paying through the nose, we should move to the wealthy suburbs. Perhaps so, and we better do it quick. If next winter is like this one, reduced snowplowing should make my move to Wayzata a real bear.

Photo: Running out of money before we run out of snow? Image swiped from the MSHS.