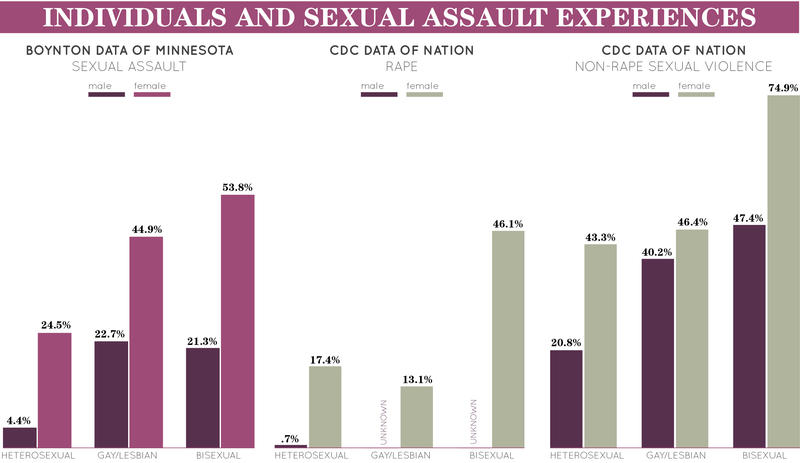 The man was older, and she had a crush on him. They were grabbing movie rentals at Blockbuster before going to a party at his house.

But before they got to the party, the man pulled the minivan off the road into a secluded area in farmland.

He asked if she wanted to have sex, and she said no. He didn’t listen.

“He forcibly raped me in the car,” said the University of Minnesota student, who identifies as bisexual. She was 15 at the time.

“My story is not unique, unfortunately,” she said of the event that happened more than a decade ago. At her request, the Minnesota Daily is withholding the student’s name, identifying her only as “Jane.”

More than half of bisexual women respondents to Boynton’s survey of the state’s college students said they experienced sexual assault within their lifetime.

OutFront Minnesota and other organizations are working to fix the gaps in access, prevention and legislation surrounding sexual assault of LGBT individuals.

The LGB sexual assault rate is higher than for any other population Boynton has studied, spokesman Dave Golden said.

“The sexual violence aspect is not about sex,” said Donna Dunn, executive director of the Minnesota Coalition Against Sexual Assault.

“It’s about when an act of sexual contact is used as a tool of harm against somebody.” 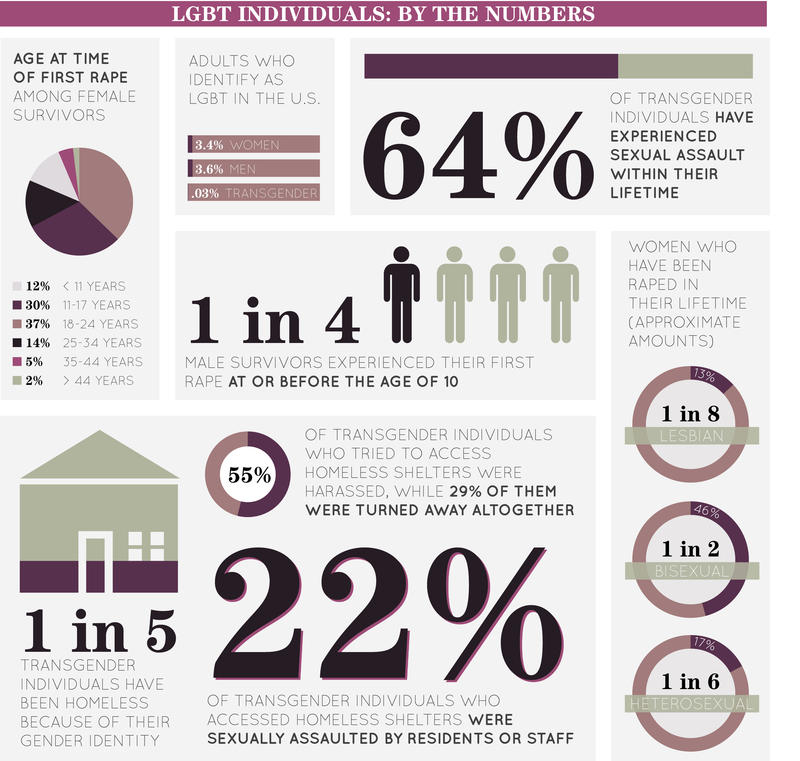 Regarding the missing ‘B’ and ‘T’

Within the LGBT community, bisexual and transgender individuals are often left out of the conversation.

Ian Schroeder, a University psychology senior who identifies as transgender, said they were raped at age 19. Schroeder goes by gender-neutral pronouns because they don’t identify with masculine or feminine pronouns.

The first time Schroeder sought resources for the depression and anxiety that stemmed from the sexual assault was “horrible” because the professionals made incorrect assumptions about Schroeder’s sexual orientation and gender identity, they said.

Resources that were supposed to be LGBT-competent weren’t transgender-competent, said Schroeder, who works in the University’s GLBTA Programs Office.

Because she said bisexual people are often stereotyped as promiscuous, Jane said she was often told that she must have been “asking for it.”

As an undergraduate student at a Midwestern university, she reached out to feminist and queer groups, where people didn’t believe she was bisexual and instead tried to tell her what her own sexuality was.

“What I really needed was support,” Jane said, “and I didn’t get it from either of those communities at that time.”

She didn’t find a supportive bisexual community until she arrived at the University of Minnesota, where she also started therapy for the first time.

Schroeder said a welcoming queer community is important because talking to people who aren’t understanding can be “re-traumatizing” and can prevent sexual assault survivors from seeking the help they need.

“I think that’s really important anywhere — to accept people for their whole selves,” Schroeder said, “for their changing selves.”

Coming out for help

Sex offenders prey on people from marginalized communities — like those who identify as LGBT — because they can be seen as easy targets.

LGBT sexual assault survivors are often not “out,” so sexual offenders — often acquaintances — know they’re less likely to report it. 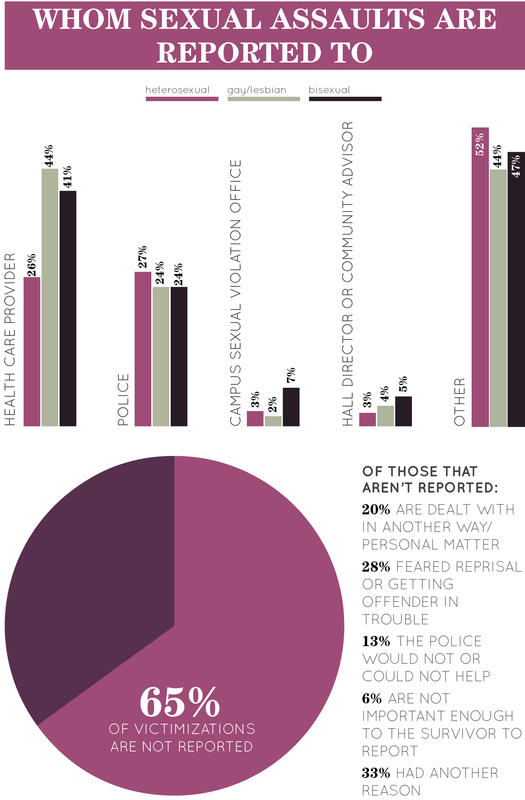 “You have to come out in at least some degree to receive services,” Waggoner said, “and that can be incredibly scary.”

Another reason LGBT people can be targeted, Dunn said, is they might not report the assault because they don’t want to give the LGBT community a bad reputation.

“It’s more important to stay silent sometimes than to risk another ‘black eye’ on the community,” she said.

Jane said there’s often an assumption that all queer people have something wrong with them that contributed to their sexual orientation.

In some cases, LGBT individuals are sexually assaulted in an attempt to “fix” their sexual orientations — something known as “corrective rape,” Schroeder said.

The negative treatment they might receive in different systems because of their sexual orientation or gender identity could also dissuade LGBT survivors from reporting, said Katie Eichele, director of the Aurora Center for Advocacy and Education.

“We want to be a place where all individuals, based on their identity, can reach out and get the help that they need,” Eichele said.

“There is a diverse amount of people that do come into the Aurora Center,” Kluesner said. “But as far as reporting or being able to talk about violence that’s happened, there’s still a lot of stigma associated about being in the LGBT community and coming forth about that.”

When she looked at anti-violence programs from other Big Ten schools for Aurora Center research, Kluesner said few resources were available for LGBT individuals at other conference schools.

Day One Minnesota is a statewide network of domestic violence and sexual assault programs throughout the state.

Historically, the movement to address domestic violence came from the women’s movement, Tait said, so most shelters are geared toward women.

“I think that’s a framework that still stands pretty true,” Tait said. “However, conversations are broadening to work with folks that are male-identified.”

Tait said some programs work with male survivors by setting them up in a motel and providing resources there, but that option is limited to a three- to five-day stay.

“It’s not enough, but it’s something to start,” Tait said.

As a result of limited access to shelters, male- and trans-identified survivors often resort to homeless shelters — where they still may be denied, said Ben Pabich, an anti-violence project coordinator at OutFront Minnesota.

In a 2011 national study, more than half of transgender individuals who accessed homeless shelters were harassed by shelter staff or residents, and almost 30 percent were turned away altogether.

More than a fifth reported being sexually assaulted by homeless shelter staff or residents.

“We don’t think we should be the only people providing services because LGBT folks are everywhere,” said Waggoner of OutFront Minnesota. “And they should be able to access any mainstream sexual assault services across the state.”

New revisions to the Violence Against Women Act, a law first enacted in 1994 that funds sexual and domestic violence programs throughout the country, include provisions for LGBT survivors.

Tait said passing the LGBT-inclusive VAWA through the U.S. House of Representatives on Thursday was a “huge sigh of relief.”

The new VAWA, Waggoner said, will be the strongest version in the history of VAWA and crime victim services.

“The people who are legislating for us are understanding what we’re working with and understanding that this is a really huge issue and it’s not going away,” Tait said.

Jane said the inclusive VAWA recognizes that sexual and domestic violence happens in all communities.

“It’s important that when people go to providers and safe houses that they are welcomed and get the services and help they need.”

Like most sexual assault victims, Jane never reported the rape to authorities.

Out of fear of mistreatment, Schroeder also didn’t contact police.

Talking to authorities or getting an evidentiary exam can be a frightening experience for queer or transgender individuals because people like forensic nurses might not be trained in LGBT-competency.

Foster said the Sexual Violence Center has given forensic nurses in Hennepin and Scott counties LGBT-sensitive training, including knowing not to assume a patient is heterosexual.

LGBT sexual assault and domestic abuse survivors often avoid contacting police, Foster said, because of the perception that police are homophobic and transphobic.

OutFront Minnesota’s Anti-Violence Program works with Minneapolis and St. Paul police to help officers identify the perpetrator and victim in same-sex domestic violence situations, Pabich said. If the police can’t determine who perpetrated the assault, they sometimes arrest both partners — or the victim instead of the offender.

Pabich said the police officers’ training has been well-received in the field.

But sexual assaults and domestic violence are still the most underreported crimes, especially among LGBT survivors.

“[LGBT training] has never come up,” he said, “but that doesn’t mean that we shouldn’t consider it.”

Mobilizing bystanders who witness potentially dangerous situations has been a key element in prevention, Foster said.

Before a sexual assault occurs, there can be 20 to 40 bystanders that stand between the perpetrator and the victim, she said.

The Aurora Center offers bystander training for students to learn how to prevent sexual assaults and other potentially dangerous situations, Eichele said.

After bystander training, students might be more likely to confront hate crimes or people who use derogatory remarks toward LGBT people, Kluesner said.

Jane said she thinks training provides a feeling of empowerment in knowing one can do something to help someone in danger.

The inclusion of men in conversations about sexual violence is also important, Eichele said.

“There’s so many aspects of prevention programming we want to do,” she said. “Our campus is really looking for a program that can engage men — not to blame them, but to invite them into the conversation.”

‘No longer being silent’

Schroeder had a personal mantra for seven months after the rape: “Try to keep it a secret. Don’t let anyone know.”

To cope with the ensuing depression and anxiety, Shroeder said they resorted to self-harm.

Shroeder said they felt partially at fault for the rape and used to think it might have affected their sexual orientation.

But after talking with another trans-identified person about their experiences with sexual assault, Schroeder set up an appointment with a counselor.

Now, Schroeder said they can talk openly about being a rape survivor to show others that it’s OK to talk about rape and seek help.

“I think that I’m healing every day,” Schroeder said. “I’ll never be healed, but I do think that I’ve started to heal.”

Jane said she no longer feels the pain she once felt on a daily basis.

“You can go through hardship and get through to a better place,” Jane said, “especially once you do have access to the right resources.”

Waggoner said opening up a dialogue about sexual assault is key to stopping the incidents from occurring.

“We want people to start talking,” she said. “Talking and no longer being silent is the way that we’re going to stop sexual violence.”