Psychology major Michael Dennis leans on creative english writing major Winfred Bates's arm Saturday at Comstock Hall. This is one of the few places the couple said they feel comfortable showing affection after allegedly being attacked in late September. (Photos by Anthony Kwan)

Dennis said the last time they interlaced their fingers, something happened that forever altered their relationship and lives.

While walking from the downtown Target to a bus stop Friday, Sept. 23, Dennis said the couple — both University of Minnesota sophomores — was assaulted by a group of 15 men who repeatedly punched and kicked him as they yelled gay slurs.

Though his bruises have faded, Dennis said the couple’s healing process is far from over.

Dennis said he’s felt pressure to forget his story from friends, family and even the police, who he said “didn’t seem to care,” and “made it seem like an everyday thing we could just get over.”

He wants to break the silence with the hope of promoting awareness of hate crimes to the University community.

He does so just as the University’s gay, lesbian, bisexual, transgender and ally celebration of National Coming Out Week comes to a close.

“Everyone is telling us to act like straight people and pretend this never happened,” Dennis said. “I think this is a chance to show people that this does happen and encourage awareness to hopefully end this kind of hate crime.”

‘They saved my life’

In cold weather, Dennis and his boyfriend, Winfred Bates used to stuff their intertwined hands into one of their pockets to keep them warm.

That was the case three Fridays ago when the couple was returning from a “weekly Target run.”

Dennis said they used Nice Ride bikes to get to the store, purchased a few items and then headed up Nicollet Mall to Chipotle Mexican Grill for dinner.

Before leaving, they quickly debated how they would get home — the city bus or Nice Ride bikes. It was chilly so they decided to take the six-block walk from Target to the bus stop that would take them back to campus.

This is a decision they both said they now regret.

Two blocks from the stop, they stopped to readjust their bags and the couple was allegedly assaulted when a group of about 15 young men ran toward them yelling gay slurs and grabbed them by their shirt collars.

Bates was able to free himself and run, but he returned to help Dennis who said he was repeatedly punched in the face before being pushed to the ground and kicked in the side by one of the members of the group.

Once Dennis was “roughed up pretty good,” he said some of the men in the group became uncomfortable and pulled their friend off of him.

“I really want to express thanks to those guys,” he said. “If they really wanted to cause physical harm, they could have done much worse.

“They probably saved my life.”

Once Dennis was free, he and Bates ran, eventually getting to the bus stop where they were able to call the police.

But Dennis and Bates said they didn’t receive the police response they expected.

They said the police took nearly 20 minutes to arrive, and when they did, the two female officers didn’t seem interested in what happened. They smiled, laughed and joked with each other.

Bates said they took the description of the young men, asked if Dennis needed an ambulance and then instructed them to catch the next bus home.

He said he pleaded for a ride from the police because they didn’t feel safe.

In the back of the police car, they once again grabbed each other’s hands, the last time they would do so outside of Comstock Hall until now.

“It still hadn’t hit me,” Dennis said. “I couldn’t wrap my head around it all until we got home.”

After entering the doors, Bates said it was difficult for him to leave for a week, and he still hesitates to do so alone.

“Every time I get ready to leave Comstock this feeling of panic starts to kick in,” he said. “It’s getting a little better, but it’s still there.”

“My identity has kind of crumbled,” he said. “The amount of me I show really depends on the day and the moment.”

He said part of the reason he was excited to move from Missouri to Minneapolis for college was the culture and resources — such as the Lavender House, a GLBT community in Comstock Hall where the couple met last fall — that made him feel welcome and accepted.

Initially wary of showing affection in public, he said he gradually came to be comfortable holding Dennis’ hand just about anywhere.

Less than a week before the alleged attack, he met Dennis’ father, which was a first for both of them.

“I’ve been kind of forced to regress,” Bates, who debated withholding his identity in this article, said. “As far as our relationship goes, I think it’s gotten a bit distant because I’ve been clouded by fear.”

Dennis, on the other hand, said he is used to people opposing his sexuality. The Eden Prairie, Minn., native said he came out to his father three times before he took him seriously.

Even his grandparents are staunch supporters of the anti-gay amendment that would restrict marriage to a union between one man and one woman in the state of Minnesota.

He said his high school had to hold meetings for its GLBTA student group at random times and places to prevent retaliation.

When he called his father the night of the alleged attack, Dennis said he encouraged him to go back in the closet, something he said he will never do.

As Bates began to make Comstock Hall a fortress against the outside world, senior Bao Diep is just beginning to leave the one he said he has been hiding in for much of his life.

Last Monday, he stood on Northrop Plaza, microphone in hand, and spoke publicly as a gay man for the very first time as part of the University’s celebration of National Coming Out Week.

He organized the University’s first Pink Dot Rally, where students and faculty pledged their support for GLBT communities around campus and the world.

“The U is generally a place where we can feel comfortable being ourselves,” he said. “A lot of the reason is a GLBTA office that really tries to create a better environment for us.”

Dennis and Bates’ story didn’t surprise him at all.

Diep, who is also an intern at OutFront Minnesota — an organization that provides anti-violence, public policy and law education supportive of GLBT communities — said he hears similar stories about hate crimes, homophobia and harassment everyday on the organization’s 24-hour hotline.

Xay Yang said members of the GLBT community have to constantly calculate their surroundings in a way that others don’t always have to in order to gauge how to act in certain environments.

She said she always avoids public displays of affection, and would be hesitant to call police if she ever experienced discrimination.

“No matter what, I will always assume [the police] have that bias,” she said.

Minneapolis police Sgt. Steve McCarty said police strive to “treat everybody fairly” and though they don’t get crimes related to the GLBT community often, they are trained to handle them with sensitivity.

He said there are just as many — if not more — hate crimes for other minority populations, and the type of response each warrants, “depends on the situation.”

There are occasional reports of police not responding appropriately to GLBT and other communities, McCarty said. But anybody who feels he or she was mistreated can report the incident so the department can better serve Minneapolis as a whole.

The perceived lack of support from police is something Diep, a sociology of law and criminal deviance major, hopes to combat in his professional career.

“I really want to be a police officer,” he said. “It’s really hard for a heterosexual to understand sometimes. I’m hoping to help bridge that gap.” 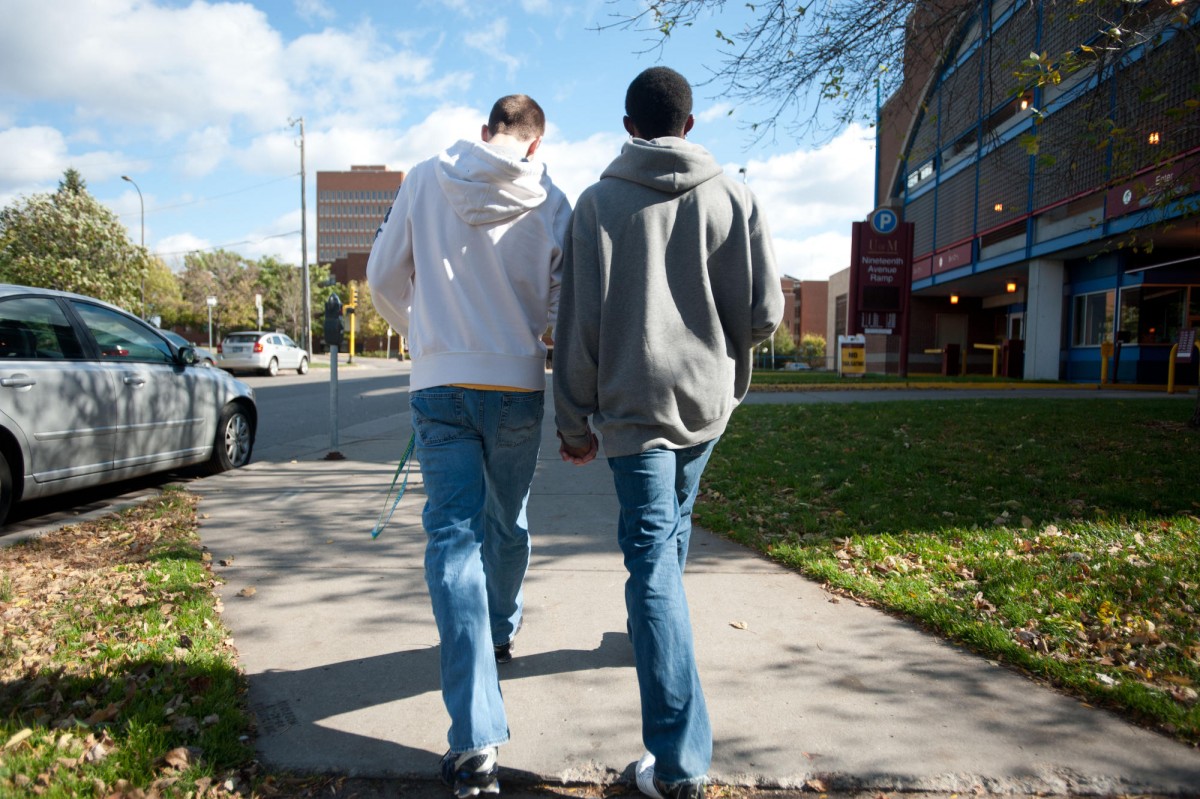 When Dennis and Bates talk about how they first met, they still smile and argue about who made the first move. They still make weekly Target runs, only they’ve changed their route and vow to never return to Nicollet Mall.

They are even starting to show affection again, even if it’s only under tables or concealed between them on the city bus.

As they begin to re-embrace the identities they believed they were attacked for, Dennis hopes the couple can spread awareness and take a stand by sharing their story.

Before the attack, for every person who would give the couple “the look,” or yell slurs at them, Dennis said there would be a person who would praise them for displaying their love so openly.

He said he is still hoping for the day when the two are once again able to walk down the street with their entwined hands swinging between them.

He encourages other couples to take a page from Yang’s book and “live authentically.”

“My advice to other couples would be to continue holding hands. Be who you are and be happy,” he said. “It’s going to take people seeing it and getting used to it for it to finally be accepted.”