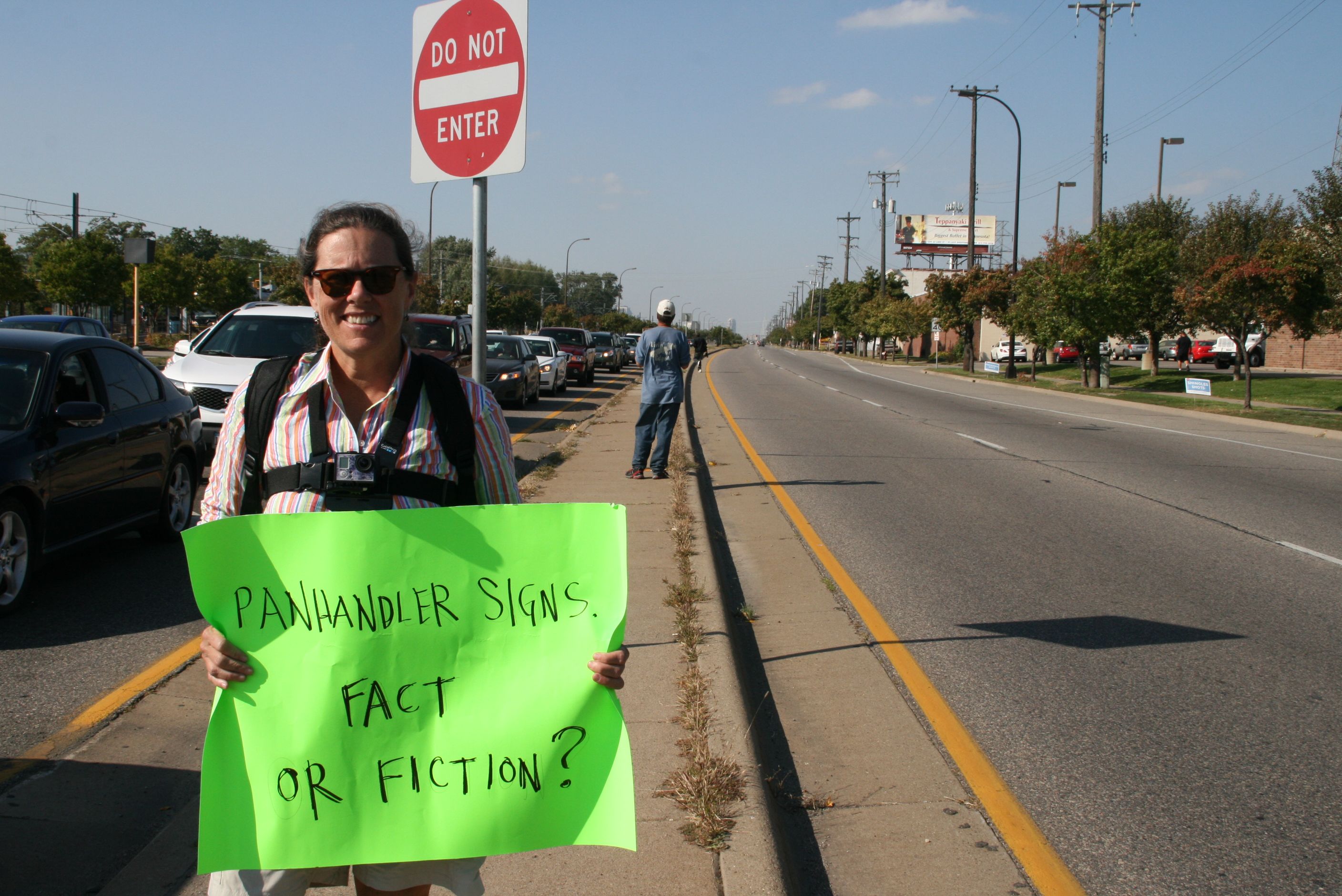 It was early August and Nancy Ford was on her way to work as a freelance videographer when one of the many panhandlers at the corner at 46th St. and Hiawatha Ave. started swearing at her.

“I live in the neighborhood,” she said. “I see the same people begging here day after day, year after year. I’ve been followed home. I’ve picked up their trash. I’ve found where they’ve gone the bathroom. I’d just had enough.”

Ford walked into the Walgreens, got a sharpie and made a sign. ‘Don’t give money to bums,’ it said, and she stood on the median behind the panhandler. “He was so pissed, he left behind a sandwich and a coffee from Burger King,” she said.

The sign pissed off a lot of people, she admitted. “It was very polarizing. People walking by ripped the sign out of my hands.” She changed the wording of her sign to “Don’t give money to panhandlers.”

“Good advertising is immediate and effective and with a call to action,” she said.

She also got support from people driving by. “I get thumbs up. People thank me for what I’m doing. It’s fascinating. You never know what people will say to you.”

Ford says that some panhandlers may be truly needy, but with many, it’s a con. “There are enough services out there if you want to get yourself out of this situation, you can. People will sometimes give food instead of money. I find apples, bananas, granola bars – all left unopened and uneaten.”

“Some people come from the suburbs to work this corner. This is a good corner. It’s got a long light and a lot of traffic,” she said. “This isn’t easy work but this is their grind. People are creatures of habit and you’re more likely to stay with what you know than try to change.”

In the 10 to 15 hours a week Ford spends at her corner, she said she has gotten to know some of the regulars. “Most people don’t take the time to observe a public space,” she said. She admits that when she first started her campaign, she was motivated more by anger than anything else. But during her two months working alongside the panhandlers, she’s gotten to know some of them.

She said that she has had long conversations with one panhandler, a man named Mike, who puts in regular hours standing with his own sign, soliciting money from the cars that stop at the corner. “I like Gary, too. He’s real amicable. I bought him sandwiches. He’s nice, but a huge bullshitter.”

She points to a couple crossing the street. “Watch them,” she said. “They’re going to turn left and go down the bike path. They’ll smoke pot and drink Steel Reserve.” (A high alcohol malt beverage in 16 oz. cans.) Sure enough, the couple turns left and wanders into the bushes.

She points to another woman. “That’s Cheryl. She lives in Eagan with her mother. She claims to have an autistic child. I’ve seen her get into her car to drive home.”

Ford gets along with most of the panhandlers, but has faced problems. “Some get on their phones to have their friends come after me,” she said. Ford wears a small video camera around her neck – protection, she said. She once pepper sprayed a woman who tried to attack her.

“I’ve been thinking about doing a video, but I haven’t found the storyline yet,” she said. “And, that would make me a participant, not an observer.”

“The problem of homelessness needs to be rethought. If people do this year after year, it’s not a solution,” she said. “There are resources out there, especially in this town. But, don’t ask me what to do to solve it. I’m just an observer. I’m not a social scientist. I don’t have any answer, but I certainly have people talking.” Her Facebook page gives a phone number and a link to Greater Twin Cities United Way for resources and help.

Ford said that she hasn’t yet decided if she’s going to carry her fight into the winter months. “I’ll make that decision when the time comes,” she said. But, for now, she’s testing her newest sign, “Panhandler Signs. Fact or Fiction?”

Nancy Ford holds her sign a few yards away from a panhandler. She has been protesting 10 to 15 hours a week since early August.

The reactions from drivers; thumbs up or hostility.

Shift change at 46th and Hiawatha. These panhandlers have a strict schedule about who can work which corner and when.