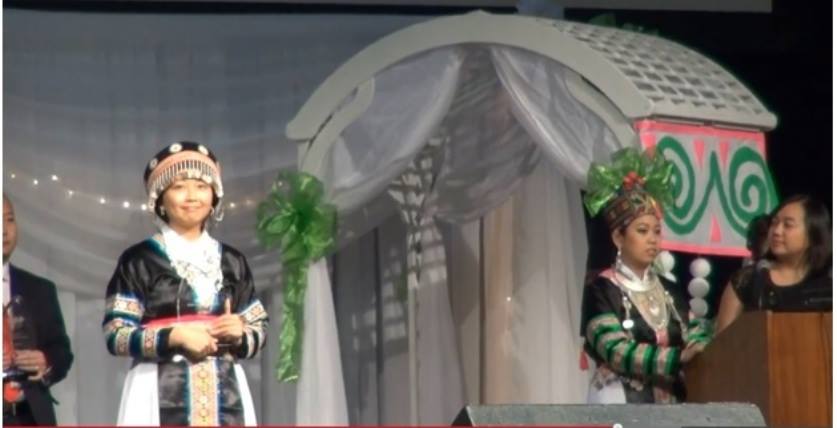 “I wanna be the change that I am seeing” sang Chilli Lor and the United Prodigies at the Hmong New Year’s celebration November 30. The song about education and equality picks up on themes that are central to Chilli Lor’s life.

Born in Thailand some 21 years ago, she came to the United States at the age of two. Today, Lor studies at St. Catherine University and majors in sociology and critical studies of race and ethnicity. She is multitalented, performing as a hip hop artist and writing spoken word poetry in her free time. Her words show her love for her roots, the Hmong culture.

For the past few months, she has been working as a literacy advocate for the Minnesota Internship Center and also as a chapter leader of the Students for Education Reform chapter at St. Catherine University.

In the future, Lor wants to combine art with her work. And she already knows in which direction she wants to go. “I am really passionate about achievement gaps in education,” she said. “Especially Minnesota has huge achievement gaps between students of color and white students and also rich and poor students.“

She added, “Statistics in Minnesota show that about half of Afro Americans don`t graduate high school because of systematical issues that take place.“ She also pointed out, “The United States has one of the largest prison complexes in the world. We spent much more money on prison than on education. That is a huge systematic issue and education is the key to undo that. And that makes sense, right? Everybody deserves a quality education. We have a good public school system but not for people of color because of larger systems that take place.“

“The government spend lots of money in tutoring but when it comes to the government level they don`t do much,” she said. “I want to create a long lasting change – that´s why I chose to study this.“

Watching Chili Lor, you actually start to believe that she can do everything. Although she is young, you can feel her inner strength and the will to change things for the future.

Everything that she does, she does 100 percent. The Hmong Higher Education Scholar Program gave her the Emerging Leadership Award at the Hmong New Year celebration. This award goes to outstanding Hmong leaders who are committed to advancement of their community and personal growth.

Three weeks earlier she won the Special Jury Award at the Associated Colleges of the Twin Cities (ACTC) Film Festival for the film “A Hmong Scar: Translated Bodies of the Hmong Diaspora.” According to the film festival judges, her film illustrates a level of social and political reflection about historical and contemporary issues facing particular communities in our city.

At 21, Chilli Lor will graduate from college next spring. She is definitely someone we will hear from in the future.