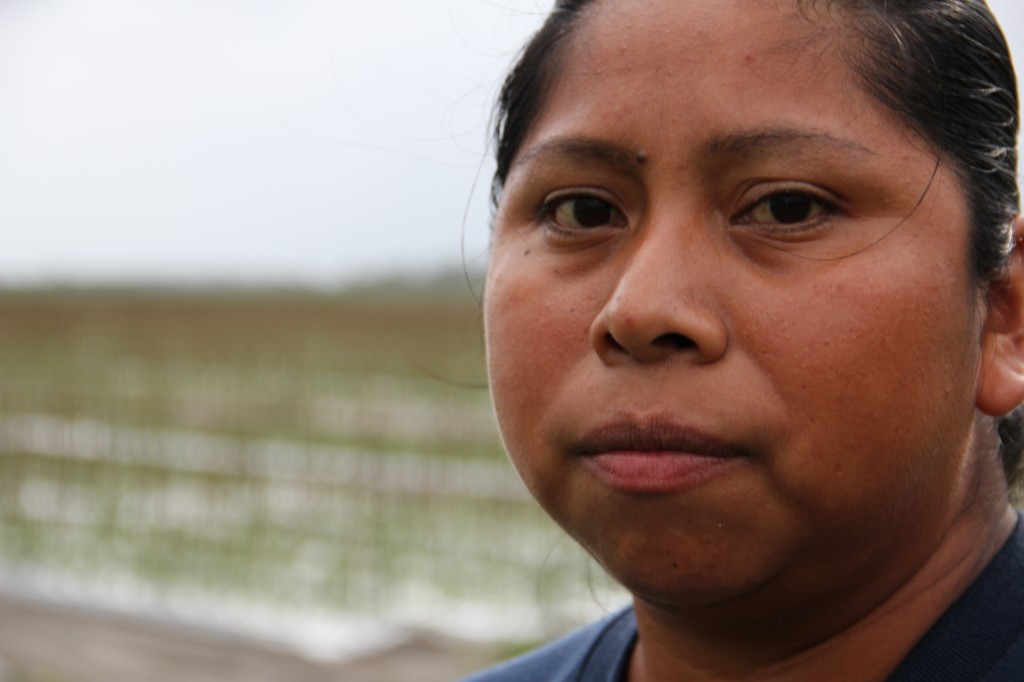 On our way towards Immokalee, Florida to visit with Immigrant Farm laborers, we decided to stop into a Chipotle. We pride ourselves on not eating fast food, and have only stopped at 1-2 along the way (always either Subway or Chipotle, and always vegetarian). But there is something about Chipotle that makes me feel like I’m not eating at a fast food joint. Their decor of metallic, aztec-ish mosaics on the walls; smell of cilantro rice; and clean metal tables is familiar and comforting so far from home. Their motto is “Food with Integrity” (it’s right there when you pull up the website), and they pride themselves on working with small farmers (when they can) and providing good, local, farm-supporting food. And it tastes good. So, we pulled off of interstate 41 without any guilt and stopped in for a quick bite.

I got what I usually get: veggie bowl with lots of rice, topped with a little bit of black beans, cheese, lettuce and their mild salsa chocked full of red tomatoes, onions and herbs. And I usually swing for some guac on the side. Maybe it was the oppressive heat outside that made my shirt stick to my back, or my premonition of a long day of filming ahead, or it could have been because deep down, somehow I knew that this would be my last veggie bowl at Chipotle for a long time…but I cleaned my plate.

And then we drove to Immokalee, Florida — the state’s largest farm worker community. In Immokalee the per capita income is only $9,700/year, half the people in town live below the federal poverty line, and the area has seen many cases of “modern day slavery” (meaning farmers holding people against their will, forcing them to work, beating or killing them if they tried to escape, and knowing that they can have this control over them because the workers don’t have any means to save themselves). As Barry Estabrook wrote in his book, Tomatoland: “Any American who has eaten a winter tomato, either purchased at a supermarket or on top of a fast food salad, has eaten a fruit picked by the hand of a slave. That is not an assumption, it is a fact (Douglas Molloy, US Attorney for Florida’s Middle District).” “Immokalee,” as Estabrook continues. “Is the town that tomatoes built.”

We drove in around 3pm and went to the small, nondescript Coalition of Immokalee Workers (CIW) office building that had been painted the strange off-yellowish color that many buildings in Florida sport. It was like a scene from a Mexican folk movie: a man sitting outside on a fold up chair listening to Mariachi music blaring through the windows while stray chickens roam the streets outside and do their best to stay out of the path of little Mexican or Guatemalan boys racking up their own point system by kicking a ball back and forth. We were there to meet up with our film subject for the day: Lupe, an immigrant from Guatemala who, like the other farm workers, lives in this town during tomato season, and then moves north to find other work in the fields. Lupe’s husband has been in Northern Florida since May (the last time she saw him). So for now, she lives with her 8 year old son and another family in a (barely 2 bedroom) labor camp trailer. The trailers are small, poorly made boxes with a tiny shared kitchen (a stove, fridge and sink). The kitchen is too small for more than 3 people to be in at one time, and yet 7 people crammed in their the evening we arrived. The little bedrooms house two mattresses and multiple people who pile in at night. One room was for a mother and her 4 daughters. Lupe, whose daughter lives in Guatemala and whom she hasn’t seen in 11 years, sleeps in a room only with her son. The labor camps are dotted throughout the little town of 15,000, and to live in them, the rent is steep: up to $400/week for a trailer. A ridiculous amount for farm workers who make (on a good day) $50.

And the good days are for only a couple months out of the year, and even then there is little consistency. Workers line up every morning at 4am in the parking lot of a local “Fiesta” grocery store waiting for buses to pull in looking for labor. Men and women will wait all day if need be. Many go home empty handed, hoping that the next day will be luckier. On rainy days, there will be no work for anyone. Crew leaders (those who round up the laborers and bring them to the farmers) have been known to hold back paychecks, sexually harass the women or limit their access to work.  When we asked Lupe why they do this, she answered “because they can.”

And that’s all before getting to the farm. Once you’re there, it doesn’t get easier. We weren’t permitted on the farms to see the actual work, but Lupe told us how laborers will spend all day in the fields picking tomatoes in the hot, hot heat. Before CIW came along, workers often had no access to water and no breaks.  In some ways, things have improved slightly, however each bucket of tomatoes a worker fills (roughly 32-35 lbs) still gets them around only $0.45. Forty Five Cents. And they are picking green tomatoes — as in, tomatoes that are not ripe. If you live in Florida and ever find yourself behind a tomato truck, you probably wouldn’t know it as the fruit is completely unrecognizable. The tomatoes are picked green so that they can be gassed with chemicals to turn red and then shipped to other areas of the country.  Ever notice how a fresh tomato tastes totally different from those bought in the winter? That’s why. Or at least that’s one reason.

But back to the workers. The Coalition of Immokalee Workers is doing their best to make conditions better, by “training local, state, and federal law enforcement to investigate, uncover, and prosecute existing slavery operations, in addition to working to eliminate the root causes of the problem: farm workers’ structural powerlessness and grinding poverty.” (Grist)  Beyond helping them to know their rights, CIW also created the Campaign for Fair Food asking the major tomato purchasers in this country (fast food chains, grocery stores) to pay a penny more per pound for tomatoes, and asking farmers to put that penny towards the workers. So a 32lb bucket of tomatoes harvested by a worker would result in $0.80, instead of the current $0.45. That would mean a huge increase in wage for that worker.

The Campaign doesn’t stop there, CIW also asks the major food purchasers to work with agricultural suppliers that adhere to the CIW first ever Code of Conduct, which looks out for worker rights, and creates market incentives for those suppliers willing to respect their worker’s human rights, even if those rights are not guaranteed by the law. And lastly, they ask for 100% transparency for their tomato purchases in Florida. In November 2010, the CIW and the Florida Tomato Growers Exchange signed an agreement to extend the CIW’s Fair Food principles – including a strict code of conduct, a cooperative complaint resolution system, a participatory health and safety program, and a worker-to-worker education process – to over 90% of Florida’s tomato fields.

On February 9, 2012, Trader Joe’s finally agreed to help the plight for farm workers by signing the Fair Food Agreement. They joined (among others) such big names as Taco Bell, McDonald’s, Subway, Burger King, and Whole Foods. But guess who wont join CIW: Chipotle and Publix.

It is especially surprising that Chipotle, the one corporation whom you would assume would be at the forefront of workers rights issues, is distancing themselves. They promote the integrity of their food and practices more than anyone — so the fact that they wont partner with CIW in adopting the Fair Food Principles is especially baffling. The company’s whole image is around Food with Integrity and their focus on ensuring the products they use “are grown, made and shipped without exploiting people”. From Chipotle’s website: “We can talk about all of the procedures and protocols we follow and how important they are – but it all really comes back to the people behind every ingredient we purchase, burrito we make, and customer we serve.”

These workers are the people behind their ingredients. Instead Both Publix and Chipotle have decided to do it their “own way” in an approach that forgoes transparency and farmworker participation.  Both have statements about their uninterest in partnering with CIW. Publix issued a statement in 2010 saying: “If there are some atrocities going on, it’s not our business…”  Chipotle’s CEO states their efforts in improving the nation’s food supply system are “rooted in doing the right things”…so why arent they doing the right thing in the case of farmworkers?

The thing is, farmworkers rights are a very important, but overlooked issue. Despite all the news as of late, consumers very often dont consider those people who are picking the majority of our food. By working with CIW, Chipotle would be bringing to light something that is so important. That’s what Daniel told Chris Arnold, Communications Director & Official Spokesman for Chipotle, when we met last week at the Edible Conference in Santa Barbara: “Whether or not you are compliant with the standards that CIW puts forward, the public needs a governing force. We buy fair trade coffee, not because its perfect, but because it sets a standard. By working with CIW, you would be making people aware of the farmworkers who are bring us our food.”

Major purchasers are changing their tune thanks to CIW. What’s it going to take for Chipotle and Publix? Maybe if the two chains came down to Immokalee and saw what its like to be on the other end of the tomato, they’d change their minds. It has definitely done a number on me.

See the video we filmed while in Immokalee.