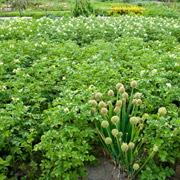 Unless you were somehow connected to the urban farming movement, you had probably never heard the word “permaculture,” until very recently. Is it a long-lasting social trend? A medical technique that reverses baldness? Sorry, no.

Permaculture, a contraction of “permanent agriculture,” refers to a system of growing food that uses minimal outside inputs, re-uses all waste and results in intensive year-round production. The ideal permaculture farm or garden will not require plowing and replanting each year and produces many different crops at once, thus imitating the high efficiency found in natural ecosystems.

Permaculture hit the mainstream in a New York Times article last week, which chronicles the movement’s growth over the past four decades. The word permaculture was first coined in the late 1970s, and since then it has floated beneath the radar as the stuff most people might write off as for granola-munching types.

Despite the new-wave following of permaculture, however, the movement holds great potential for a wide swath of people. Many of the techniques used in permaculture are based off of those used by family farms before industrial-scale agriculture became the norm.

If you grew up in rural Minnesota, you’re probably familiar with piling manure and sawdust around farmhouses to keep warm in the winter, and the same technique is applied to permaculture greenhouses—the compost both insulates the crop during the winter, and then in the spring it can be used to fertilize plants.

Growing Power also does outreach to low-income groups, who often lack access to healthy foods. A community garden that provides food to needy families was recently started on historic Summit Avenue in St. Paul with the help of Minneapolis’s Permasculture Research Institute, furthering the reach of permaculture into the public eye.

The question remains, how could human-scale food production like permaculture ever compete with the thousands of acres of crops grown for animal feed, car fuel production, and direct human consumption?

In Minnesota, where over a third of agricultural land is used for production of corn and soybeans, very little of what’s grown in Minnesota will ever be directly eaten by Minnesotans. Corn and soy production alone was valued at over $10 billion in 2010. Until industrial ag inputs like petrol-based fertilizers and pesticides increase dramatically in price, permaculture won’t be able to compete in scale. But for now, this method is growing in appeal and purpose. Permaculture has the potential to change the modern food system in ways that other agricultural movements (e.g. organic food) have not been able to.