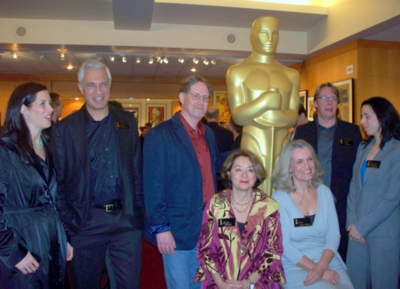 BEVERLY HILLS, CALIFORNIA—A reception featuring the 10 Academy Award-nominated films in the Feature Documentary and the Documentary Short categories was held Wednesday at the Samuel Goldwyn Theater. It was the first time the Academy has held a screening and media welcome for the Best Documentary nominees.

“It’s been a stellar year for both short and feature documentaries,” said host Barbara Kopple, herself an Oscar winner in 1976 for Harlan County USA. “We believe in them so passionately that we just have to make them. Sometimes documentary filmmakers face life and death situations.”

Some nominated filmmakers will have the stars of their films attend the Academy Awards show Sunday. Roger Ross Williams said the subject of his nominated film, Music by Prudence, will be at the ceremony. Prudence, 28, is confined to a wheelchair by severe disabilities and lives in Zimbabwe. Williams documented her music, song writing, and her band of disabled youth who inspire with their positive outlook and singing abilities.

“No one had ever asked Prudence about her life,” said Williams. He said that although films about Africa’s genocide and HIV issues are important, he wanted to make a film about overcoming obstacles. “I wanted to show Africans controlling their own destiny,” he said.

Four laid-off auto workers from General Motors are attending the Academy Awards with filmmakers Steven Bognar and Julia Reichert. The pair learned about the closing of the largest employer in Dayton, Ohio fourteen months ago. They grabbed a camera and began filming employees on their last days of work, which turned into the nominated film The Last Truck: Closing of a GM Plant. Reichert said they were citizens with cameras.

“The factory was the life-blood of the town and now it is gone,” said Reichert. “It’s ripping the heart out of our town.” Reichert said she was surprised by the large number of women working in the auto plant. She also said the factory was very diverse and had an easy interracial workplace.

“The auto workers had a real sense of community,” she said. “Now they are sitting in their houses all alone. It’s been really hard. Most people are still looking for work.”

Also present, and rising to a standing ovation, was 78-year-old Daniel Ellsberg, the subject of Rick Goldsmith and Judith Ehrlich’s film The Most Dangerous Man in America: Daniel Ellsberg and the Pentagon Papers. Ellsberg released documents about U.S. involvement in the Vietnam War in the 1970’s to great personal cost. He will be at the Awards ceremony.

The Last Truck: Closing of a GM Plant

The Most Dangerous Man in America: Daniel Ellsberg and the Pentagon Papers