More than 200 protesters sounded off in front of St. Paul’s Ordway Center for Performing Arts on October 8th about the musical “Miss Saigon,” which activists say presents racist stereotypes, promotes colonial views of the American Dream and romanticizes sex trafficking. Play goers mostly ignored the protesters, although one woman shouted, “It’s just a play!” and two actors from the show, which was beginning an eight-performance run, spoke to the crowd.

Asian-American actress Rona Figueroa and white actor Richard Steele came out to the rally and were given the microphone to speak to the group. “I think it’s interesting and it’s good that you guys have a voice,” said Figueroa. “You want to protest about something you believe in… I’m interested in what the discussion is.” She encouraged people to attend an Ordway Q and A session about “Miss Saigon” after Wednesday’s performance.

While she was speaking, Minneapolis school teacher Brie Morris shouted a plea that the actors not participate in the show.

Richard Steele, the other actor, said. “This is why this is America. You have every right to speak your opinions.” Steele also asked the crowd if any had seen the play, and numerous hands went up. “I’m very interested to hear what you guys have to say because I’m not coming at it from the same angle as you guys are. So anything you guys can teach me about it, I’ll be happy – be interested to know,” he said.

After using the protesters’ microphone, the actors entered into heated exchanges with one of the rally organizers, Juliana Hu Pegues, as well as longtime activist Ricardo Levins Morales. 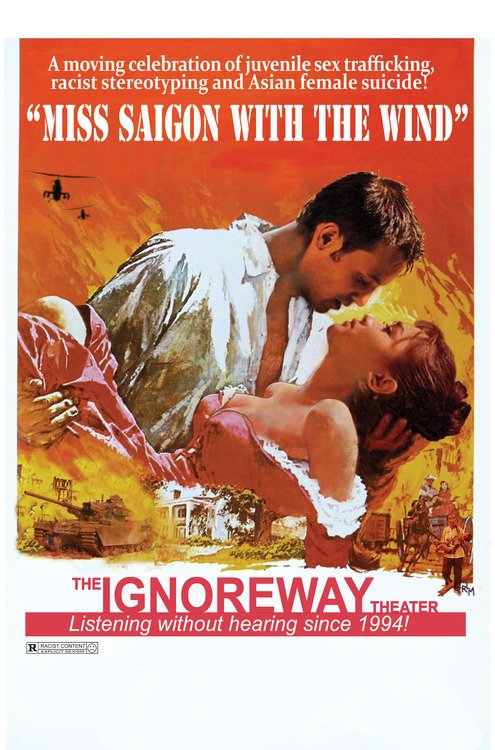 “I don’t know if it’s productive for she and I to have an argument on any level around our individual choices,” Hu Pegues said afterward. “My concern and protest is really with the Ordway as an institution, that it’s not listening to the community. The thing that does concern me is that so far, in terms of this production and the Ordway, the only Asian-American people that I’ve seen defend it have been cast members.”

Figueroa has performed in Miss Saigon in previous productions, including a two-year engagement on Broadway. She has also performed in other Broadway shows, including “Les Miserables,” but has only performed an Asian or Asian-American character on Broadway on one other occasion, when she portrayed Yoko Ono in the musical, “Lennon.” “There’s lots of different issues about being an Asian-American actor in an American showbiz context,” she said, “I feel not ashamed to be in Miss Saigon.”

There were several other Asian-American performers from Miss Saigon as well who came out to see the protest, but they declined to be interviewed.

Sun Mee Chomet, a Korean American adoptee and well-known local actress and playwright, said that if Asian-American actors can’t find work other than “Miss Saigon,” they should work in a coffee shop. “Every time you audition for a play, you bring your integrity,” she said.

Chomet shouted at a couple of patrons as they entered the theater, telling them the musical promotes sex trafficking. “People just seemed determined to go,” she said. “But the seed has been planted.” She hopes the audiences will wake up and that the play will disappear.

Stephanie Engebrecht, an audience member who has friends who were part of the protest and some who work at the Ordway, decided to come to the show in order to make up her own mind about it. “I’m a firm believer that I like to form my own opinion,” she said. “It’s hard to make an argument on one side or the other if you’re not educated. I almost didn’t want to come to the show tonight, but I also realized it’s a responsibility of mine to do that, to have those discussions, especially with a lot of my white friends.”

Engebrecht said there are a lot of other plays, too, that are offensive, giving “Romeo and Juliet” as an example, due to the lead characters being underage.

David Derr, another audience member, said he felt the play was historically accurate. “It’s what happened,” he said. Besides, he thinks the music in the show is beautiful.

Many at the protest would disagree with the idea that Miss Saigon is historically accurate, however.

“The whole musical trivializes the issues that were involved with the Vietnam War and reduces it to a ridiculous absurd love story that celebrates human trafficking,” said writer David Mura. He called the play an “abomination” and criticized the Ordway for not listening to the Asian-American community, who also protested the play both times the show came to the Twin Cities in the 1990s. “At a certain point the Ordway has to realize Asian-Americans are a part of this community,” he said. “We don’t need the Ordway to start a conversation about stereotypes. We need the Ordway to stop bringing in racist stereotypes.”

While the protest was happening, a group of students from the University of Minnesota taking an Asian-American Studies course went in to see the show. Their professor brought the class to the protest, giving them the option of seeing the show or participating in the protest. One student, Elizabeth Cong, bought a ticket to the show and sat with her fellow students in the theater, but said she felt uncomfortable. “They started talking about us,” she said of the Ordway audiences that were sitting near her and her friends. A couple of the students were approached by ushers and asked to put their backpacks away, and Cong and her friend went to the box office to get refunds. Cong said that Ticket Service Manager Leslie Brandt told them that she would send them a check as a refund.