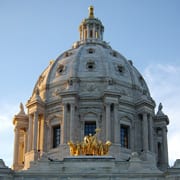 The112th Congress and new Minnesota legislative session will start with women holding less political power in Washington and in statehouses across the country.

For the first time since 1987, the number of women in Congress decreased; the first female House Speaker, Nancy Pelosi, instead leads the minority party, having lost her power to set the policy and legislative agenda; and three powerful Democratic women committee chairs were forced to hand over their gavels in the minority.

Last November’s election results in Minnesota reflect this same national trend. With the net loss of six women legislators, women’s representation declined for the first time in a decade, resulting in a three percent decline in women’s representation in the state legislature to a paltry 31.8 percent. This number masks the defeat of eight women incumbents.

Was the election a referendum on women in office? No. Women candidates, who are more likely to be Democrats at the national and state level, were caught in a national tidal wave that favored more conservative candidates.

Moving beyond the 2010 results, it’s important to note the implications of fewer women legislators at the national and state level. Evidence shows that only significant increases in women’s representation will create significant and substantive legislative changes. This comes via a nexus of policy, process and power.

Research documents that women champion policy issues that impact women and families. While many men may vote in favor of women’s health, domestic violence prevention, education, and child care, women legislators put these issues on the agenda in the first place.

In crafting health care reform at the federal level, Speaker Pelosi ensured that pregnancy and surviving domestic abuse could no longer be identified as pre-existing conditions to exclude women from health care coverage.

In Minnesota, defeated women legislators such as Sandy Rummel, Ann Lynch, Kathy Saltzman, Gail Kulick Jackson, Robin Brown, Britta Sailor, Sandy Masin and Marsha Swails have championed policies to meet the needs of women, children, and families in Minnesota. Further, without the leadership and support of Speaker Margaret Anderson Kelliher in the next Minnesota House session, the Early Childhood Education Committee is being eliminated.

Again research shows that women govern with a collaborative approach. In the last session, Speaker Anderson Kelliher successfully brought together a coalition of business, labor, agriculture and environmental leaders in support of a comprehensive transportation bill. Speaker Anderson Kelliher’s collaborative leadership style was highly praised by her colleagues as a new and effective style of leadership that led to results.

Her leadership style marked a distinct departure from the typical partisan warfare that has come to characterize “leadership,” including efforts by current male leaders at the national level to stonewall any forward movement on nuclear arms control, taxes, and meaningful job creation.

Change hinges on political power. Women’s leadership in their party and on key committees has brought about meaningful change. Research on women in organizations indicates that if women make up 40 percent or more of an institution, they change the institution. However, without parity, if they number under 40 percent, the institution may change them.

Senator Ellen Anderson provides a powerful example of this point in her retelling of a heated policy debate over storage of nuclear waste by the Mississippi in 1994. On one side of the debate rose convenience, expediency, and profit. On the other side was concern for long term health and safety of future generations.

When the votes were counted, a gender split was clear. Had there been gender parity in the legislature, the outcome would have likely been on the side of health and safety.

Increased women’s representation is essential to significant, substantive change in lawmaking and to policies that prioritize the health and well-being of women, children, and families.

It is hard to predict what state-level impact losing our women legislative incumbents will have on social policy. The elimination of the Early Childhood Education and Public Health and Housing Committees are strong indications of the priorities of the newly established leadership.

Womenwinning understands that substantive change in government depends on women’s equal representation and leadership. And we are going to work very hard over the next two years to recruit progressive, pro-choice women to run and win at all levels of government to ensure that never again does women’s representation-and all that comes with it-slide backwards.

Sarah Taylor-Nanista is executive director of womenwinning, an action group aiming to increase the number of women in public office.